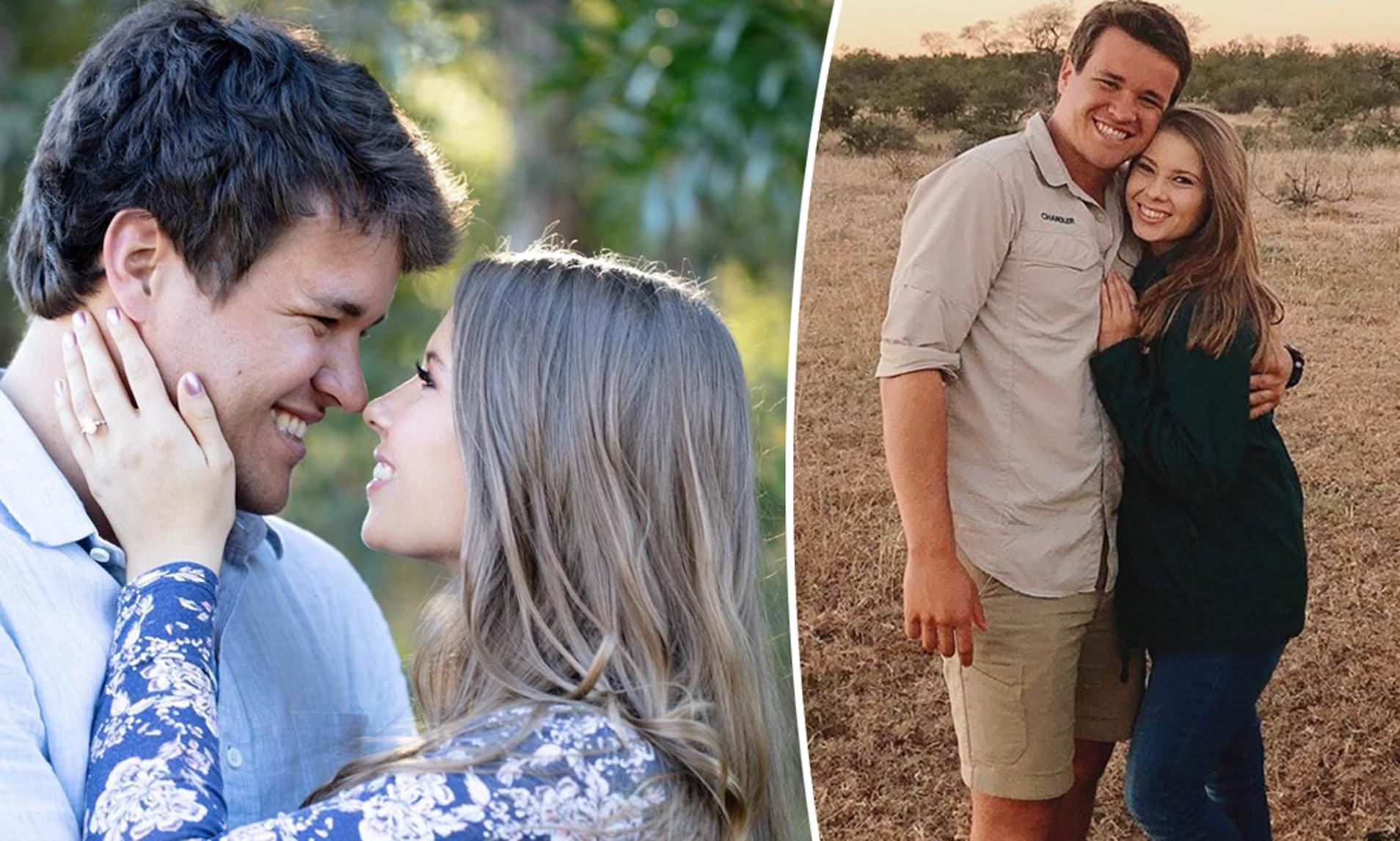 American-Australian television personality Bindi Irwin is finally married to Wakeboarder Chandler Powell. Amid the coronavirus pandemic, Bindi Irwin’s wedding with Chandler was not a lavish one, but they seemed pretty much in love.

Besides, the newlywed had their engagement a year earlier in July almost after 6 years of dating.

Well, here, we have brought to you details on the new wife Bindi and her romantic relationship with her boyfriend-turned-husband Chandler.

Bindi Irwin Wedding With Chandler Powell Was a Private Affair

Finally, a year after the engagement, Bindi tied the knot with her longtime boyfriend, Chandler on March 25, 2020. But unlike other celebrity weddings, the duo managed to make their marriage a secret candlelit ceremony.

Their wedding was arranged in the gardens of Australia Zoo in Queensland, which their grandparents own since the 1970s and is still run functionally by the Irwin family.

Following her nuptials, Bindi took to Instagram to share the photo of the occasion. In the caption, she wrote,

We held a small ceremony and I married my best friend. There are no words to describe the amount of love and light in my heart right now. We’ve planned this beautiful day for nearly a year and had to change everything, as we didn’t have guests at our wedding.

As a matter of fact, their marriage was initially scheduled for April 4 but was fast-tracked to March 25 considering the government’s decision to limit a wedding to 5 guests per wedding that would come into effect on March 26.

Post Bindi’s marriage, her mother Terri Irwin took to Twitter to share a cute photo of Bindi as a little girl in a bridal costume. Looks like she could not be more proud to see her daughter as a bride.

Not only this, but the proud mother also remembered her husband, Steve Irwin on the auspicious occasion. She even posted a photo of Steve with their daughter on her Twitter.

In the photo Steve can be seen holding their son Robert, who is now 16; both wore khaki in the pic. Here is the post.

Terri also mentioned that Steve would wear khaki even for Bindi’s wedding. He died after a stingray attacked him in 2006.

Like Irwin, her husband could not stop himself from uploading his new wife’s picture on his Instagram. Well, Powell’s post on March 30 not only showed his beautiful wife but also her diamond wedding ring in her ring finger.

The 21 years old Irwin cradles a Koala in the photo.

While the duo has not revealed the price of the wedding ring, sources have estimated that it is worth around $25,000.

Her Brother Robert Walked Them Down The Aisle

Bindi’s nuptial was undoubtedly a special occasion for her, but it seems her brother was also equally excited for his sister’s wedding.

After Bindi announced her marriage, Robert expressed his excitement on a Twitter post. “Can’t wait to walk you down the aisle” he wrote on his tweet.

He again took to Twitter on March 25, where he stated how happy he was for Bindi and wished her a happy married life.

As for a fact, Robert is 6 years younger than Bindi. He is also the host of Robert’s Real Life Adventures and has been the co-host of Discovery Kids Channel TV series Wild But True.

Bindi got engaged to Powell on her 21 birthday. The 23 years old Wakeboarder proposed to her with a beautiful ring on her birth anniversary.

Well, the beautiful moment where Powell got down on his knee was captured by Bindi’s brother Robert.

Bindi and her newlywed husband Chandler’s honeymoon didn’t go as they had planned. Due to the effect of the coronavirus pandemic, Bindi and Powell were forced to celebrate their honeymoon at the premises. In an interview with USA Today, the husband-and-wife revealed they spent their honeymoon time cleaning up after animals in her family zoo.

“It’s not the most romantic honeymoon in history, but it’s our honeymoon,” Bindi told the outlet. Meanwhile, her husband Chandler added,

Bindi and Powell Relationship: How Did They Meet?

Bindi and Chandler had been dating each other for the past seven years. The couple first met at Australia Zoo in 2013, which is owned by the Irwin family where Bindi happened to tour the visitors for the day.

Chandler reportedly came to Australia for his national wakeboarding competition.

Chandler revealed their first meeting in an interview with People where he said,

“It just so happened that Bindi was giving tours that day, I’m like, ‘Wow, she is amazing.”

Well, Bindi and Powell even clicked the photo in their first meeting which she shared on her Instagram. Check it out.

Well, after their first meeting, the duo kept in touch with calls and texts and soon became close friends. In fact, during her Dancing with the Stars days in LA, she claimed Chandler as her biggest support.

Bindi Irwin Welcomes A Daughter With Her Husband

Well, finally Bindi Irwin has become a mother. She gave birth to her daughter, Grace Warrior Irwin Powell, on 25 March 2021, which was also her first wedding anniversary.

Bindi had earlier announced her pregnancy on 11 August 2020, via an Instagram post. She along with her husband shared their photo holding a baby-sized shirt and in the caption shared the coming of the new member in the family. she wrote,

Baby Wildlife Warrior due 2021.
Chandler and I are proud to announce that we’re expecting! It’s an honour to share this special moment in our lives with you. Though I’m still in my first trimester, we really want you to be part of our journey from the beginning of this new life chapter.

Check out the photo here.

Well, the couple seems pretty much in love with the newborn. They have shared numerous photos of their daughter on their social media, which are pretty much reflective of their bonding.

Do You Know Chase Stokes, Here Is Every Thing You Should Know About Him