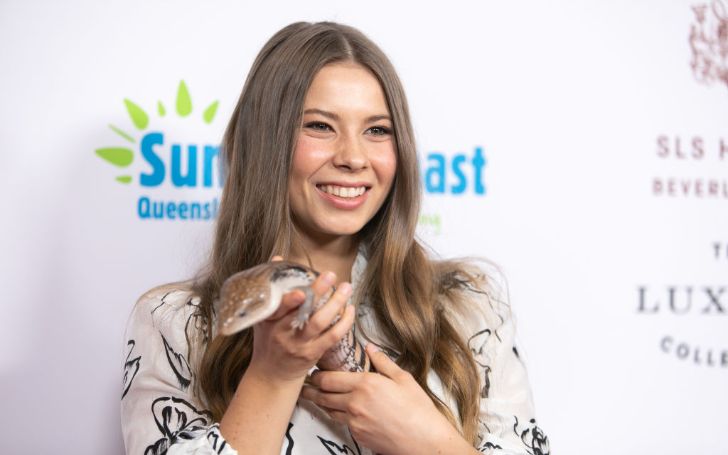 Bindi Irwin is a TV personality and conservationist from Australia. Active on TV since her childhood, she has hosted dancing, singing, and game shows. Likewise, she has also been part of many popular children’s wildlife documentary TV series.

Well, let’s find out about her parents, career, and net worth. Further, let’s also discuss her wedding with her new husband Chandler Powell.

As mentioned above, Bindi was born on July 24, 1998, to father Steve Irwin and mother Terri Irwin.

Like Bindi, her father was also a TV personality known by his nickname The Crocodile Hunter, named after his popular eponymous show. As a wildlife expert, and environmentalist he also hosted other popular wildlife shows like Croc Files (1999–2001), The Crocodile Hunter Diaries, along his wife.

Similarly, Bindi’s mother is a naturalist and conservationist who currently runs their family-owned Australia Zoo in Beerwah, Queensland.

She also has a brother Robert Irwin, who is 6 years younger than her. Robert, 16, is the host of Robert’s Real Life Adventures, a TV show based on wildlife.

Bindi’s father died at the age of 44 on 4 September 2006 after a stingray attacked him.

How Old Is Bindi Irwin?

A Career as a Host and TV Personality

Bindi made her debut on TV at the age of 9, with a children’s wildlife documentary TV series named Bindi the Jungle Girl. She has since hosted several rapping, singing, game, and dancing shows like Bindi’s Bootcamp, Steve Irwin’s Wildlife Warriors, and many others.

Besides, in 2015, she also took part in the 21st season of Dancing with the Stars and ended up winning the show.

Following this, she became part of the game show, Have You Been Paying Attention? in 2016. Similarly, she also appeared as a series regular in the reality show Crikey! It’s the Irwins from 2018 to 2019.

She Has Also Appeared in Films

Apart from TV shows, she has also appeared in films like The Crocodile Hunter: Collision Course, Free Willy: Escape from Pirate’s Cove, and Return to Nim’s Island.

As of 2021, Bindi Irwin is a married woman. She got married to her boyfriend of 7 years Chandler Powell on March 25, 2020, at Australia Zoo in Queensland. Powell is a wakeboarder by profession.

The duo was reportedly scheduled to tie the knot on April 4. However, because of the coronavirus lockdown by the government that would come into effect on March 26, the nuptial was fast-tracked to March 25.

Their Honeymoon was Affected By COVID-19

Bindi and Chandler organized their wedding around a week earlier than they had planned. Alike their marriage, their honeymoon plan was also affected by the coronavirus pandemic. The newlyweds spent their honeymoon period at their premises.

As they said in an interview, Bindi and Powell cleaned up after animals in her family zoo. Bindi said, “It’s not the most romantic honeymoon in history, but it’s our honeymoon.” Similarly, her husband Chandler said,

When & How Did They Meet?

Bindi and Powell first met at her family’s Australia Zoo in Queensland where Bindi happened to guide the visitors for that day.

Later, Irwin shared a photo from their first meeting on his Instagram.

Well, they soon became friends and grew closer over time before deciding to tie the knot.

Bindi is now a mother to a daughter named Grace Warrior Irwin Powell along with her husband. Her daughter was born on 25 March 2021, which also happens to be the 1st wedding anniversary of the duo.

Prior to the birth of the kid, Irwin had announced her pregnancy via an Instagram post on 11 August 2020. Well, now as the new member is born, the couple seems pretty much into her. They often share photos of Grace on their social media.

No doubt, they look lovely together.

According to Celebrity Net Worth, Bindi has a net worth of $3 million in 2020. She earns her money from her hosting career and appearance on films and reality shows.

Also, if sources are to be believed, she walked away with prize money of $360,000, as the winner of Dancing with the Stars.

Bindi Irwin and Chandler Powell Married in 2020: Their Engagement, Wedding