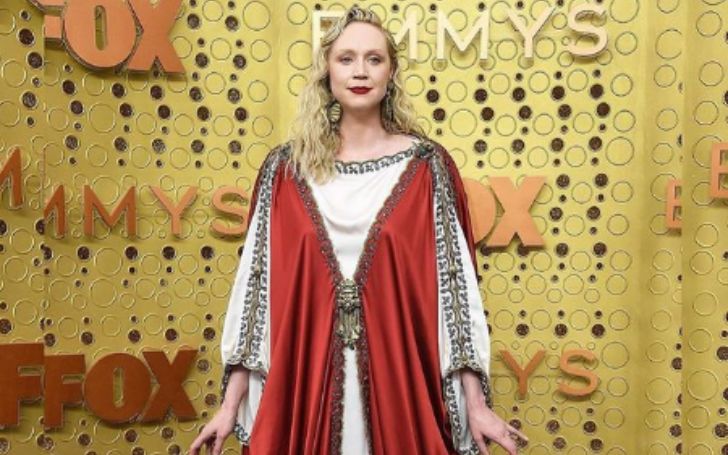 Gwendoline Christie (full name Gwendoline Tracey Philippa Christie) is an actress who rose to fame after her role as Brienne of Tarth in the drama series Game of Thrones. Besides, the actress has also portrayed several roles in prominent movies and TV series such as Star Wars: The Force Awakens, Star Wars: The Last Jedi, Welcome to Marwen, The Sandman, Wednesday, and many more.

Though Christie is a successful actress now, her dream as a child was to be a gymnast. However, because of her health conditions, Christie couldn’t achieve her goal. Gwendoline switched her mindset to working on screen, it wasn’t easy for her as Gwendoline was bullied a lot because of her unusual height. But, the actress eventually made it into showbiz and is doing great in whatever Christie has stepped on.

Where is Gwendoline Christie From? All About Her Family And Early Details

The actress was born Gwendoline Tracey Philippa Christie on October 28, 1978. So, as of 2022, she is 44 years old. Christie was born and brought up in Worthing, West Sussex, England, and holds British nationality. Furthermore, she belongs to the White ethnicity.

Both her mom and dad belonged to an average family so she did have a normal childhood as a child. Her father worked in sales and marketing whereas her mother was a housewife. However, she was lucky enough to have supportive parents who always encouraged her to follow her dreams from an early age.

For her primary education, Gwendoline went to a private school in her hometown when she was young. However, keeping her goal in mind, she later decided to attain her degree from Drama Centre London. She successfully graduated from that college with a first-class BA in 2005.

How Tall is Brienne of Tarth In Real Life?

Gwendoline Christie stands at the height of 6 feet and 3 inches. The actress always felt different from the crowd in her earlier days because of her distinct height and was even bullied for her height. Nevertheless, it seems to be her strength these days as she flaunts it proudly.

Gwendoline Christie Was Trained as a Gymnast In Her Childhood

Looking at the successful career of the actress, it seems like she always aspired to evolve as an actress. However, it is not so. Before choosing the field, she studied ballet at the age of four to become a professional gymnast. But when she suffered a spinal surgery, she dropped her dream and picked the profession she is currently into.

“I was over coached. But also I was growing really, really fast. My body decided that was it, no more. And I was told I could never dance again.”

Even though Christie was “obsessed” with being a gymnast, her physical condition at that time didn’t support her. She said, “they strained all the muscles” in her spine and was told to stop the training or else she wouldn’t even be able to carry a child. It was then her mind switched and thought of being an actress.

Does Gwendoline Christie Have a Husband? Her Relationship Status

Well, Gwendoline Christie is in a love relationship but is yet to be married. The years-long love affair between the actress and her long-term boyfriend Giles Deaconis is quite open to the public. She is dating 53 years old Giles since early 2013 and is still strong together. Her partner is a fashion designer, creative director, and founder of the fashion enterprise, Giles Deacon Group.

The pair are very supportive of each other and also make public appearances frequently. Deacon even mentioned his girlfriend inspired his brand’s first couture collection in 2016. Yet, the details about how they first met and started dating are still a secret.

Like their first meeting and initial romance, their date of marriage is also behind closed doors. So far, the girlfriend and boyfriend haven’t taken a step forward to talk about their nuptials, engagement, or any plans regarding it. We hope the lovely power couple will tie the knot soon.

Following the path Christie always wanted to walk on, she is now one of the known faces in the media. Her role in Game of Thrones (2011) as Brienne of Tarth changed the whole game and reached a different level in her career.

Gwendoline similarly has appeared in other prominent movies as well. She played the character of Commander Lyme in The Hunger Games: Mockingjay– Part 1 in 2014 and Part 2 in 2015. In addition, she starred as Captain Phasma in Star Wars: Episode VII- The Force Awakens (2015) and Absolutely Fabulous: The Movie (2016). Her achievements don’t end here as she is also the face of the Vivienne Westwood A/W 2015 campaign.

Furthermore, the actress was also nominated for a Primetime Emmy Award in 2019 and is a recipient of several other awards. Regardless of all her flourishing success, it wasn’t a piece of cake for her. Her first job was at the Royal Shakespeare Company with Declan Donellan in “Great Expectations.” She even worked in a regional theatre, world tours, and the West End.

Who is the Big Female Knight in Game of Thrones?

As we mentioned above, the big female knight in the HBO fantasy-drama series is Gwendoline Christie. It is one of her best roles ever played on screen so far.

Gwendoline Christie Is All Set For Her Role On Wednesday

After her prominent role in Game of Thrones and many more, the actress is set for her new character in the new series “Wednesday.” Christie in an interview with Entertainment Weekly mentioned that she has created her own role this time as per the direction of Tim Burton.

She has played the role of Principal Larissa Weems in the series which belongs to the dark comedy category. Since Christie herself has added a touch to her character, she is more than happy to play her character.

“It is the first time I’ve ever felt beautiful on screen.”

She further expressed her gratitude towards the makeup and hair team. Season 1 has already premiered on Netflix in November 2022 and got a good response from the viewers as well. She appears in the series along with Jenna Ortega, Iman Marson,  Emma Myers, Jamie McShane, Hunter Doohan, Percy Hynes White, and Emma Myers.

What is The Net Worth of The Actress?

Through her flourishing career, Gwendoline Christie is earning a good amount of money enough to live a lavish life. She has worked in numerous movies and series which has made her worth it. As of 2022, Gwendoline has a total net worth of $4 million.

The 44 years old is not only popular in the industry, but her craze is also among social media users. Yes, the actress has millions of followers on her social platforms. Also, she is active on all the social media handles.