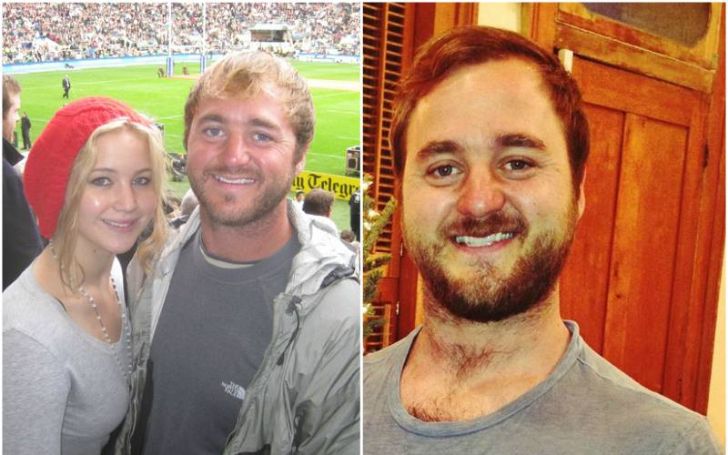 Blaine Lawrence is the director of Camp Hi Ho, a summertime camping facility in Louisville. However, he is better known as the brother of Jennifer Lawrence. His sister is a world-renowned actress and has done various movies including the X-men and the Hunger Games.

Many people only know him as the brother of the famous actress however, there is more to his life that has been attracting attention. In fact, there are many who are curious about Blaine’s career, age,  married relationships, and love life in general.

So, if you are also one of these people and looking for answers about his life, then rest assured as today this article will cover everything there is to know about Blaine Lawrence, Jennifer Lawrence’s big brother.

Who is Blaine Lawrence? Details on His Early Life and Age

As we said earlier, he is the director of Camp Hi Ho. Blaine was born on 1985 in Indian Hills, Kentucky. His father Gary Lawerence is a construction company owner and his mother Karen Koch former manager and owner of Camp Hi-Ho.

Blaine and Jennifer have an older brother by the name of Ben Lawrence. Ben is a professional web designer and managing partner of Louisville Geek, an IT company.

Similarly, Blaine has a mixed racial background including English, Irish, German, and Scottish ancestry. He is an American by nationality.

Blaine completed his high school at Ballard High School in the year 2004. Similarly, for further studies, he went to the University of Kentucky and graduated back in 2008. Likewise, his big brother Ben had also completed his education at the same high school and university.

Blaine Lawrence is the Director of Camp Hi-Ho

The camp was first founded and operated by Blaine’s mother Karen Lawrence. However, after Karen retried, her second son Blaine took over the business.

The camp is located in Louisville where kids from ages four to twelve come every summer to enjoy various activities. It encourages them to make their own decisions and choose what they want to participate in. Hence, it is the perfect place where kids can be kids and enjoy their time.

The Camp was Destroyed in a Fire in November 2020

All things were going well for Blaine Lawrence until one day on November 27, 2020, when the camp caught fire. The main building was reduced to ashes and nothing was left of it.

It took almost 30 firefighters to take down the engulfing flames. It was a huge loss for the Lawerance family. The camp had been active for over 35 years and all the hard work and sweat put into it left Blaine quite upset and hurt. On November 29, 2020, Camp Hi Ho’s Facebook page shared a post saying,

“It is with the heaviest of hearts that we confirm the news that we lost our barn last night in a horrible fire. We are deeply thankful that no people or animals were hurt, but we are still mourning the loss of years of hard work and memories that occurred in these walls.”

“Words cannot describe the pain we are in, but we are so incredibly grateful for the Simpsonville Fire Department and all the other firefighters who responded to our emergency.”

Furthermore, Jennifer Lawrence’s brother asked his community for help via a Fundraiser and assured them that he will do everything in his power to bring back the camp and come back even stronger.

Moving to the present, the camp is built and fully functional. It has been active since June of last year and doing great ever since.

As per what caused the fire, the investigation shows that it was caused by an electrical short-circuit which may have occurred due to a faulty extension cord.

The camp Hi-Ho director married his girlfriend-turned-wife Carson Massler on October 7, 2013, on a Hermitage farm in Kentucky. The ceremony took place in front of their closest friends and family members.  It was raining heavily that day and when asked about the wedding Carson said,

“It was crazy, epic, and very wet. It set a state record for the third-highest rainfall ever! All the things you worry about on your big day happened to us, But that’s what we loved about it: It was real.”

The couple first met in 2012 at a Louisville bar. After meeting each other they felt some sort of connection and went outside for a walk and sat under a tree and talked for hours. The funny part is both of them were dating someone else, however, a couple of months later they were single and their true love story blossomed.

Blaine Has Two Children With His Wife

The lovebirds have been married for almost nine years now. They are blessed with two beautiful children. However, they are quite secretive about their personal life and they have managed to keep the details regarding their kids away from the media.

The family of four is in happy space and making the best out of life.

His sister Jennifer Lawrence is a famous American actress born on August 15, 1990, to Gary Lawrence and Karen Lawrence. At the age of 14, Jennifer asked her parents to let her go to New York to have a shot at acting. Hence, she along with her brother Blaine went to New York. The famous actress also dropped out of her school to pursue her dream.

She started her career with minor roles in Company Town (2006) and Medium (2007). However, she got her breakthrough after appearing in the sitcom series The Bill Engvall Snow and won the Young Artist Award for the same series. Furthermore, she has appeared in multiple movies including the X-Men series (2011-2019) The Hunger Games (2012-2015), and many more.

Similarly, Jennifer was deemed the highest-paid actress in 2015/16 and appeared on Time’s list of 100 most influential and motivational people in the world in 2013. Likewise, she has won a total of 90 awards including an Oscar, three Golden Globe Awards, four Critics Choice Awards, and more.

He is estimated to have a net worth of $500,000. He has accumulated his income working as a director for Camp Hi Ho.

On the other hand, his little sister and famous actress Jennifer Lawrence is estimated to have a fortune of $160 million. She has accumulated her fortune from her career working as an actress.

Is Blaine Lawrence on Instagram? His Social Media Handles

Yes, Jennifer Lawrence’s brother is active on Instagram (@blainelawrence). Likewise, he is also active on Facebook (Blaine Lawrence) where he posts many photos of his family and kids.