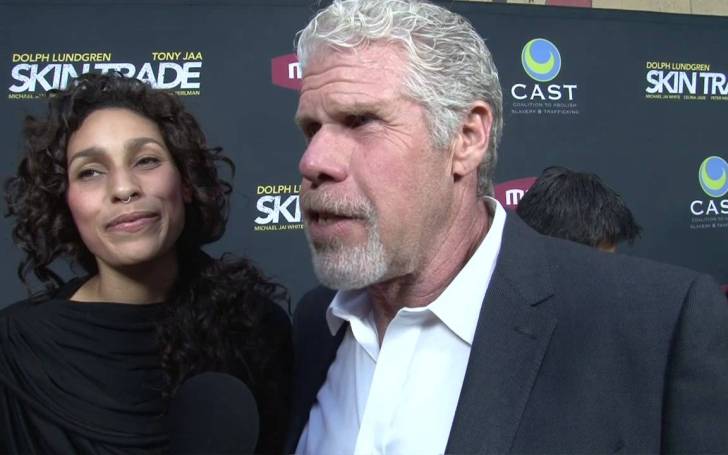 Blake Perlman is an American singer and actress who is mostly known for Archer (2009), Hands of God (2014), and Pottersville (2017). Apart from her acting career, she is famous as the daughter of an American actor Ron Perlman who played the character of Vincent on the TV series Beauty and the Beast opposite Linda Hamilton from 1987 to 1990.

Blake grew up being a daddy’s girl so while choosing her career, she first followed in the footsteps of her father and became an actress. Though Perlman didn’t become as much popular as her father Ron in the acting world, she succeeded in grabbing some good movies for her acting career which helped her to give recognition as an actor. Well, what is her movie’s name?

We are here with some interesting facts related to Ron Perlman’s daughter Blake Perlman that you need to know. Stick with us.

Blake Perlman Was Born In the Early 80s; Who Is Her Mother?

Blake was born ‘Blake Amanda Perlman’ on January 7, 1984, in the United States of America. As of 2023, she is 39 years of age. She grew up in her hometown with her parents and a younger brother.

Talking about her parents, her father Ron Perlman is a well-known Hollywood actor as we said earlier. Meanwhile, Blake’s mother is Opal Stone Perlman who is an accomplished jewelry designer. As for her relationship with her mother, she is absolutely close to her and adores all the family members from her mother’s side. Pearlman keeps sharing her maternal family on her Instagram.

Besides, Blake who stands at the height of 5 feet and 5 inches belongs to a mixed race. Her mom is of Jamaican ancestry while her father is Ashkenazi Jewish, having roots in Hungary and Poland. She holds American nationality.

Blake Has A Younger Brother

Moving on to his profession, he is an accomplished DJ and a music artist. Similarly, Blake’s brother Brandon also is a founder of the record label L.A. Club Resource. He generally works with gritty, lo-fi house tracks, and abstract beat tapes.

Perlman’s Parents Separated After Being Husband-Wife For 38 Years

Her parents, Ron and Opal exchanged vows on Valentine’s Day in 1981. The couple was in a beautiful marriage for more than three decades.

But surprisingly, the then-married couple called it quit in the year 2019 around six months after Ron was photographed kissing his Start Up co-star Allison Dunbar. Ron filed for a divorce against his wife and the two legally ended their 38 years of marital life on May 9, 2020. The pair was lastly photographed together in April 2018.

Following their divorce, Ron stayed in a relationship with Allison and eventually got married to her on June 8, 2022, in Italy. But, Opal on the other side is leading her life out of the limelight. She, with a happy face, sometimes appear on her children’s social media account.

Blake Perlman Career As An Actress; Her TV Series And Movies

As said earlier, Blake is an actress and has worked in several series and movies. She started her acting career in 2007 as a voice artist in a video game titled Skate. After that, she debuted as an actress in the 2008 movie Hellboy II: The Golden Army alongside Jeffrey Tambor.

After two years of her acting debut, she portrayed the role of Steve’s girlfriend in the 2010 film Acts of Violence. Subsequently, her other acting credit includes series and movies like Project Reality, Archer, Deadbeat, Law Breakers, Pottersville, and many others.

She Is Also A Singer and Crafts Jewelry As Well

The StartUp actress Blake is not only into acting but is a singer and lyricist as well. She has written and sung a song titled Solar. Also, she is a vocalist of the song Chameleon and the single Drift (Pacific Rim).

Apart from her singing and acting, she also makes handmade jewelry, especially crystal-made bracelets, and other necklaces and earrings. She runs her jewelry business with the name Ritual Adornments and even has an Instagram account under the username @rituaal_adornments.

Personal Life: Is Ron Perlman’s Daughter, Blake Is In Relationship?

At present, though several online tabloids considered her relationship status to be unknown, she seems to be in a relationship with a man named Stephen Hailo.

On June 7, 2022, Blake shared a photo of Stephen on her Instagram with the caption,

Stephen baby Stephen 😍😍😍 you gergeous slice of heaven!! what a cherished source of love & light u are in my world … 🙌🏽 so pleased to adorn the king w #ONYX & #HEMATITE for strength & ultimate protection 🖤🖤🖤

Back in December 2021, she shared a couple of photos and captioned them like “multiple choice!!!! if these were your parents you would be:….” and ended with a phrase,

Seeing this, it can be said that she is possibly sharing a relationship with him.

Blake Perlman Is Absolutely Close To Her Brother’s Child

To date, there is no information about Blake being a mother. But she absolutely adored babies and really close to her brother Brandon’s child named Benny, born on February 8, 2022.

She keeps sharing Benny on her Instagram. On October 12, she shared some beautiful photos of her with a baby and wrote,

MY LITTLE B’s!!!! it has been the biggest JOY – a true gift having you in my city ♥️❤️♥️ on to the next adventures!!!! i love you my gorgeous #family #babybenicio

She is overjoyed with the arrival of her little nephew in her life and is a proud aunt.

Perlman Is Active On Social Media

She is hugely active on her Instagram and has 10.7k followers. On her Instagram, she majorly shares her singles photo that is followed by some of her together moments with her family and friends. Perlman also promotes her jewelry works on her Instagram page.

Further, Blake is on Facebook and also has a YouTube channel with 286 subscribers. She is also featured in TikTok.

Blake Perlman has earned a considerable amount being an actress and singer. So, her estimated fortune is $1.5 million as of 2023. On the other side, her famous father Ron Perlman has a net worth of $8 million which he earned through his established acting career.