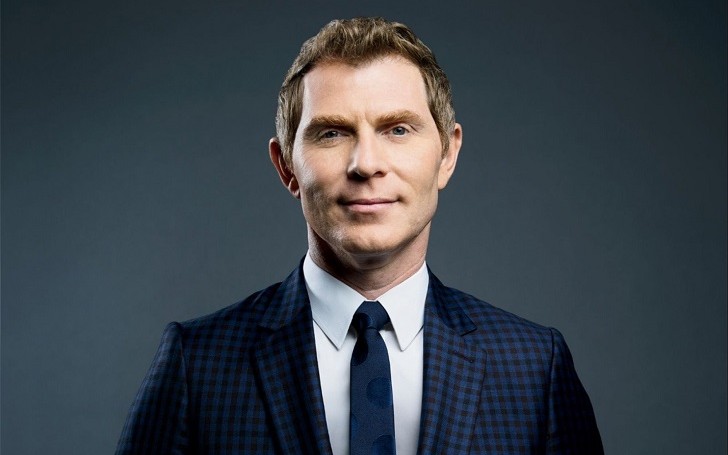 Bobby Flay is one of the most successful chefs and restaurateurs, who has a enjoyed great career in the food industry over the years. But Flay’s love life seems to be quite complicated. The man with several failed marriages is still hunting for a good relationship.

Flay has been married thrice; his third wife was Stephanie March. Well, why is the veteran reality television personality’s love life so unstable? Also, find out if Flay is dating a girlfriend at present?

Here is a complete love story of Boby!

Who is Bobby Flay’s First Wife? They were married for two-years

Flay’s first wife Debra Ponzek is also an American chef. She initially studied engineering at Boston University but later dropped out of college. She later attended the Culinary Institute of America in Hyde Park and has now an impressive career in the cooking field.

The couple tied the knot on 11th May 1991. Their wedding ceremony took place at the classic NYC haunt, The Rainbow Room. That was the time both of their cooking careers were also taking off.

The couple walked down the aisle in front of 225 wedding guests including chefs Jonathan Waxman and Larry Forgione. They celebrated their honeymoon in Anguilla.

How did the two first meet? Their unconditional love for cooking

Bobby Flay and Ponzek first crossed their path when Flay was working at a casual restaurant Miracle Grill, in the East Village in June 1990. The two met when they both were working at the Meals-on-Wheels charity in the same year.

He later invited his then-future-wife Debra including five of her pals to the Miracle Grill. There Flay worked as the executive chef. He cooked an elaborate meal and many other items to impress her.

The couple dated for a few months before their engagement. They both also got the James Beard Award nomination for Rising Star Chef in 1992. But, Ponzek won the big award.

A year after, Bobby also received the same accolade followed by two others. However, despite terrific chemistry between the couple, they divorced in 1993. She is now married to Greg Addonizio.

Almost 90 guests attended the event mostly male buddies were at the ceremony that included chefs Mario Batali and Tom Valenti.

They dated for over a year before their nuptials

Flay and wife Connelly first met when he appeared as a guest on her Food Network talk show in January 1994. Apparently, they both were single while Kate was raising her son Jonathan as a single mother.

For both, there was an instant attraction, yet instant danger signals. She was warned that he was a real bachelor, and he realized he met the woman he was going to give up bachelorhood for.

Soon after the show, they went on to have dinner at the Monkey Bar where they spent several hours. She told it was such an awesome moment with Flay that ever happened in her life. Just after a few months of their love affair, the two also got engaged.

Nonetheless, their relationship also didn’t last long and they separated in 1998. Their divorce finalized shortly thereafter.

The couple also shared a daughter, a journalist for ABC7

Flay’s wife Connelly gave birth to their daughter named Sophie Flay on 16th April 1996. She graduated with a broadcast and a digital journalism degree from the University of Southern California.

Sophie currently serves as a community journalist for ABC7. She joined the network in March 2019.

Flay’s third wife Stephanie March: How it all began?

After going through two failed marriages, Bobby Flay went on to marry Stephanie March, his third wife on 20th February 2005. They first came across back in the early 2000s. In the meantime, the actress took her biggest step in the entertainment industry with the hit TV series Law & Order: Special Victims Unit.

The couple went out for their first blind date after weeks of delays in Nobu in New York City. She told CNN, “I know it’s a cliché, but I remember thinking, oh my gosh, this is the rest of my life”

There, the two enjoyed dinner together. They subsequently began dating. He popped the question before Christmas 2003 with a Center ice rink at Rockefeller Center. The couple got married soon after they got engaged.

On February 9, 2003, they appeared together at the Diane von Furstenberg Fall/Winter Collection fashion show in New York City. The celebrity couple also attended several other major events throughout their relationship.

Their scandalous divorce: Flay’s alleged extra-marital affair with his assistant

Flay and March’s marriage started getting in trouble after his reported affair with much younger lady Elyse Tirrell. She first began working as a hostess and later became his assistant at Bar Americain in Midtown.

As per March’s pal Maia Madison, an actress,

She came to my house and was sobbing uncontrollably. She said, ‘I can’t believe the last 10 years of my life have been a lie

Bobby and Elyse reportedly got close after Bobby helped her when she was involved in a car accident in 2010. Sources report that Flay also wasn’t there when March had to undergo an emergency appendectomy after suffering a burst appendix in November 2013.

Furthermore, Bobby also skipped out on their 10 years anniversary.

Well, the couple separated in March 2015, and their divorce was finalized in July of the year. As per sources, Flay’s infidelity with March is claimed to be the reason behind their bitter divorce.

Stephanie is now happily married to Dan Benton since 2017.

Bobby Flay, after his split with March, started dating Masters of Sex actress Helene Yorke. They first met in 2016 at a Knicks game. The two struck it off right there.

They were also spotted hugging together in New York’s streets in March of that year.

The two celebrated their one-year anniversary by posting a sweet snap of themself on Instagram on February 11, 2017. Unfortunately, like always Flay’s relationship came to an end this time as well.

The two broke up after a year of their relationship. He is also single at this moment. When Fran Drescher told Flay, “What’s your situation? You’re not wearing a wedding ring. You have a girlfriend?” on his show Beat Bobby Flay in October 2019.

The celebrity chef was also once rumored to be dating Giada De Laurentiis. But neither of them confirmed the rumors.

Does Bobby Flay Have a Girlfriend After Three Divorce: Truth Revealed