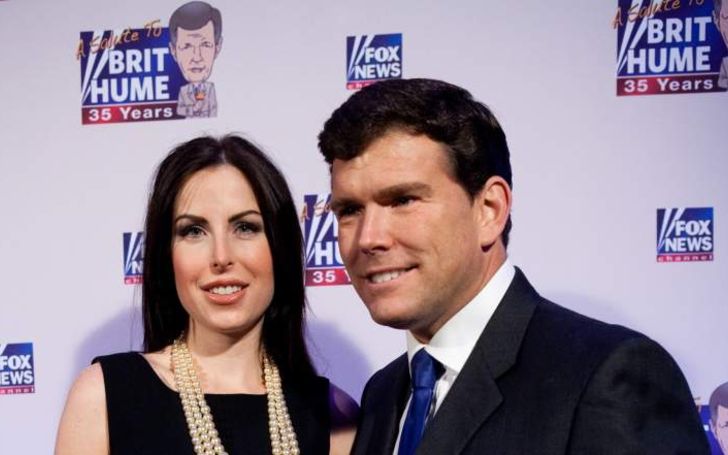 Bret Baier, born William Bret Baier, is the host of Fox News Channel Special Report on the Fox network. Apart from his professional life, the veteran media personality also has a great relationship with his wife Amy Baier.

Bret has been married to his wife, Amy since 2004, but how good are they as a couple? Does the pair share children between them? How did they first meet?

Here we are going to answer all of your’s burning questions and take a look at his wedding as well.

Bret Baier’s Wife Amy Baier: They Are Married For 16 Years

The chief political anchor Bret Baier has been married to Amy since October 2004.  They are in a marital relationship for more than 17-years and they are still going strong. Their endearing love story is quite evident in their social media.

In fact, Bret made a post on Twitter wishing his wife on their 15th anniversary. The anchor came up with a beautiful statement referring to his spouse as a beautiful woman and also thanked her for the “amazing journey.”

15 years ago today I married this beautiful woman. It’s been an amazing journey with my co-anchor in life. Happy Anniversary amyhbaier ! https://t.co/TliZoxerd3

We wish them years and years of blissful married life.

How Did Bret Baier Meet His Wife Amy?

Bret met his future spouse Amy through a mutual friend who set them up on a blind date. For their romantic date, Amy reportedly traveled to Chicago to meet Bret after which they went to the Rolling Stone concert together.

And as expected, Bret and Amy clicked instantly and a couple of years later they tied the knot in a romantic wedding ceremony.

Unfortunately, their first son was born with a serious heart defect which was discovered after an echo-cardiogram. As reported by the doctors, he had an unusual heartbeat, two holes in his heart, and three congenital defects.

In 2014, during an interview with Today Show, Brat’s partner Amy explained that the situation was very complex. She said,

“A doctor told us Paul’s heart was extremely complex, Blood was flowing the wrong way, there were two holes in Paul’s walnut-sized heart, and he had three other congenital defects. If Paul didn’t have complex surgery to restructure his heart, he wouldn’t make it. ”

Paul’s surgery was performed two weeks later in Australia in a 10-hour long procedure. Luckily, the surgery was successful, however, the baby will still have to undergo a few more surgeries after Paul comes of age.

Bret Wrote His Son’s Struggle in His Book “Special Heart: A Journey of Faith, Hope, Courage and Love”

Explaining the struggle Paul had to go through, Bret wrote the book “Special Heart: A Journey of Faith, Hope, Courage and Love.”

In the book published in 2014, Bret also highlighted that 40,000 children are born with one or the other kind of heart defect. Talking on the matter to Today, Bret said,

“It’s a powerful thing, we hope to make awareness about what people can do to get through it: one, accept the help that family and friends give; two, make sure you’re healthy because you’re not good for anybody if you’re not healthy; and three, think about the other end of the story. … Just think about what it’s like to get to the light at the end of the tunnel. (Paul’s) doing great! ”

As of 2022, Bret Baier’s spouse Amy serves as the vice-chair at the Children’s National Medical Center Children’s Hospital Foundation.

Well, as for a fact, Amy’s son Paul was also treated there in 2014. The Children’s National Hospital Foundation even honored Bret and Amy for their philanthropic works with the foundation.

The foundation also with the help of Amy established the Paul Francis Baier Comprehensive Media Room. It helps experts around the world to access diagnostic images and further study many complicated medical cases.

Along with this, Amy also helps organize the annual Children’s Ball which helps in raising money. The 2014 ball alone was able to raise $10.8 million.

Bret And His Family Met a Serious Car Accident in Montana

In January 2019, Bret along with his family met with a serious accident on their trip to Montana. Their SUV reportedly lost control after it hit an ice patch and slid to hit a pickup truck coming from the opposite direction.

After the crash, the car careened into a ditch and flipped sideways. As lucky as it may sound, Bret and his family had no major injuries.

Later, thanking the Emergency teams and the Montana Highway Patrol who responded pretty quickly at the time of the accident, Bret during the Special Report episode said,

“We are grateful to all those who helped us out. My advice to everyone is to always wear your seatbelt and to count your blessings every day. I tweeted this out as we left the hospital banged up, but alive. ‘Don’t take anything for granted – every day is a blessing and family is everything. It’s always good to remind yourself of that before something does it for you.”

Amy and Bret owned a Home in Washington DC Worth $3.2 Million

The Baires owned a custom-built Jim Gibson house in Washington DC in the Berkley neighborhood. They built the house in March 2009 for $3.2 million and put it for sale in 2013 for a total of $3.5 million.

The house that was mostly furnished by Ralph Lauren features one master bedroom, two bathrooms, a workout room, a nursery, and a playroom.

Moreover, the house also has a spacious garage for three cars, a wine cellar, a library, and a living room with a unique bar.

“Every time I walked into a Ralph Lauren store, I just loved the look. I wanted to replicate it for our home, I think our builder thought, ‘This young couple is nuts.’ But we didn’t want a bar in the basement. We wanted it out where we would use it with our friends. ”

In 2012, Amy and Bret were reported to be living in a Georgetown condo.