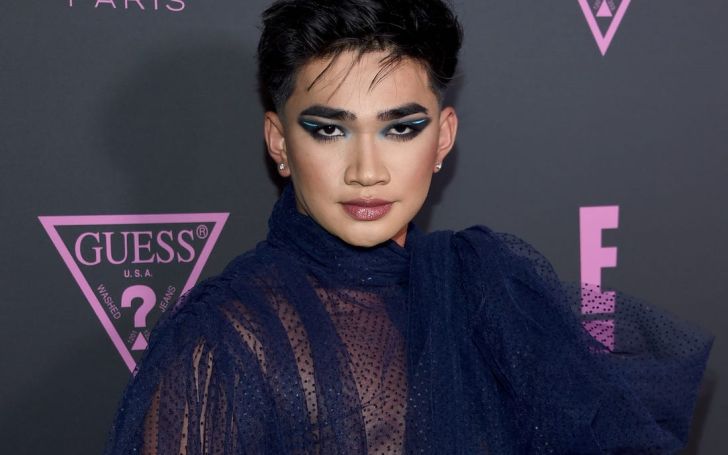 Bretman Rock is a Filipino Internet Celebrity who is known for his videos that generally contain make-up tutorials and other beauty-related stuff.

The 21-year-old has taken the internet by storm ever since joining YouTube. Let’s take a further look at his life and find out about his personal life.

Bretman was born Bretman Sacayanan in Sanchez Mira, Philippines, on July 31, 1998. He is the son of Edmund Laforga and his wife. His mom and dad also share one daughter, Princess Mae, a popular Instagram influencer. Bretman’s sister Mae is a mother of two beautiful children, a daughter, Cleo whom she shares with her ex-boyfriend, and a baby boy with her another ex-bf, Chris.

Besides, Bretman belongs to the Filipino ancestry. He relocated to the island of Hawaii when he was just 7 along with his family. He did his schooling from Hawaii.

Story Behind his unique Name: It was inspired by WWE wrestlers

Bret’s dad knew from early on that his son was gay. This is why he tried to turn him into a straight jock. He introduced Bretman to sports and fitness. It is also because of this reason, Bretman is still a sports freak and likes to work out a lot.

At the same time, Rock’s father was also a big fan of legendary WWE wrestlers, Bret Hart and The Rock. And this is how the name Bretman Rock came to be.

Parents knew Bretman was Gay from Early on

Bretman’s parents knew from the get-go that their son was gay and always supported him, albeit, indirectly. He said in an interview,

“I grew up very Catholic, and I grew up going to church all the time, but when my dad got a feeling that I was gay he was always very accepting of it.”

Moreover, after finding out Bret’s sexuality, his father even gifted him a car with barbies inside it on his 4th birthday. In many of his videos, Bretman is seen alongside his mother who is very much accepting of her son’s sexuality.

Rock claims his mom is his rock and he can freely express himself around her. Though sometimes she asks for talent fees for appearing in his videos. Pun intended!

Be that as it may, if it wasn’t for his parents, who knows if we would’ve ever witnessed such a riveting personality we see today.

His parents separated sometimes later and his father used to live in the Philippines. Sadly, he lost his father in November 2019. He passed away after he was put up in a coma for some time.

It was around this same time when Bretman called out many people for interfering with his personal life. The Make-up Guru was in the Philippines for his dad’s funeral when many ungrateful people came and took photos of him.

Because of this incident, Bretman even urged his fandom to cool it down a little and let him grief in peace.

What is Bretman Rock’s ethnic background and Nationality?

He became an American citizen after moving to Hawaii, US, when he was a boy. Apart from this, Bretman belongs to the Filipino ethnic group. Both his mom and dad were from the Philippines.

Bretman Rock Relationship Status: Who is his Boyfriend?

As of this moment, Bretman is not in a relationship. Yes, the Jolly and goofy sensation is not dating anyone as of 2020.

However, his relationship status wasn’t always single. In fact, he broke up with his secretive boyfriend in September 2020. He was dating this due for some time however, he never revealed the identity of his now ex-boyfriend.

In all the pictures he had shared with his ex-boyfriend, Bret’s partner was always hiding his face in a creative way. Up until now, nobody knows the name of his mystery man, though judging by the photos, he sure is a muscular man. And after their split, it looks like the identity will remain unknown forever.

There has been no evidence whatsoever about Bretman’s past affairs with anyone besides the guy we talked about.

Though Bretman always hid the identity of his former partner, fans were always accepting of the fact and fully supported the ex-pair.

In a small amount of time, Bretman has so far worked alongside big cosmetic brands like Kylie Cosmetics and Fenty Beauty. At an early age of 18, Time magazine named him in 30 Most Influential Teens. Not to mention, he even had his own reality show named, ‘No Filter’ on the MTV network.

In a span of five years, he has become one of the most prolific beauty gurus out there. His skill as a make-up artist is revered all around the community.

Bret’s collaboration with Morphe was more than enough to shut down all the people who looked down upon him. He created his own custom palette, Babe in Paradise. And yes, the make-up was an instant hit and even got sold out at the Morphe’s website.

What’s more, his collaboration with Wet n Wild is also selling like hotcakes. Together with the cosmetic company, Bretman has diversified his range and created numerous beauty products, including Lip Gloss, Makeup Bag, Brushes, etc.

How much is Bretman Rock Net Worth?

As of now, his net worth is $1.5 million. The figure is bound to grow soon, evident of his work and how much his hands are tied in numerous business venture.

Bretman Rock broke-up with secret Boyfriend: Who is he dating now?