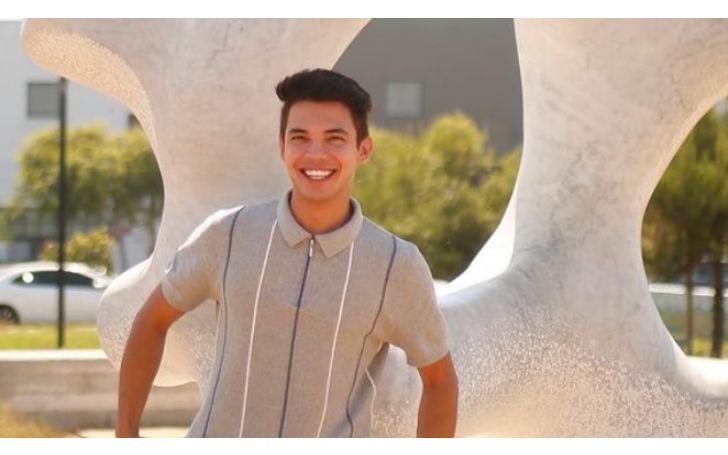 Brice Rivera is an American social media star. His three siblings, Brent River, Lexi Rivera, and Blake Rivera, all of whom are also famous in their own regard, especially Brent and Lexi, who have millions of followers on social media.

Meanwhile, Brice was once an active social media user, however, nowadays, he is not that much active. Now the big question here is, what is Brice Rivera doing?

Moreover, Brice has written on his Insta account that he is a chef, so does it mean he currently works as a chef? Let us find out the answer in addition to some interesting facts about Brice River’s wiki, job, parents, and birthday!

Brice Rivera Wiki-Bio: When does he celebrate his birthday?

Brice was born on March 14th, 1994, in Los Alamitos, California. He is the oldest child between John Rivera and Laura Marie Rivera (nee’ Paternoster). His dad is a former firefighter and his mother is a tutor.

He belongs to the Caucasian ethnicity and has American nationality. Brice, who is 28-years-old, was raised in Huntington Beach. He studied at the Hunting Beach High School.

During his time in the college, Brice used to be a big part of the Men’s Ice Hockey team. From the beginning, he was interested in playing sports.

In fact, he played for LA Hockeys for while. But along the way, Brice halted his professional career.

He has three siblings

Apart from himself, Brice’s parents have three kids, two sons, and a daughter. The second-born Blake Rivera came into this world on May 7th, 1996. Blake currently works at TSG Wealth Management as the Vice President. Furthermore, he is in a relationship with his girlfriend Jess since 2017.

Two years after Blake’s birth, on January 9th, 1998, Brent Rivera was born. He is a big social media personality who has more than 20 million followers on Instagram and more than 18 million subscribers on YouTube.

After having three sons, one by one, the Rivera couple welcomed their fourth and final kid, a daughter named Lexi Rivera, on June 7th, 2001. Talking about Lexi, she is also a social media star just like Brent. She has more than 8 million subscribers and followers on YouTube and Instagram respectively.

All four of the Rivera siblings are close to each other. Both Brent and Lexi share a lot of photos with both of their brother, Brice and Blake.

Are Blake River and Brice Rivera?

No, they are not twins. Brice is two years older than Blake.

What is Brice Rivera job? What is he doing?

If we go through Brice’s social media account, then most definitely we can assume he also has a thriving social media career. Further, his younger siblings are big names in the world of social media so it is only natural for him to join this lucrative industry as well.

Likewise, around the time when Vine was still a thing, Brice started out his career. He used to create a lot of Vines which quickly gained a lot of fame. He was even featured in David Dobrik‘s video When You Drop a Christmas Ornament alongside his brother. Brice also created a YouTube channel in 2014 where he used to upload a lot of videos.

That being said, it has been a long time since Brice started sharing on his social media handle. So what does he doing now? Well, going through his Instagram account, he has mentioned himself as a ‘Chef’ in the bio section. Maybe he is working as a chef somewhere but as he is a private person we can’t be so sure about that.

On the other hand, his brother Brent and sister Lexi have become a big influencer. Brice also appears with them in videos and photos.

He is on almost every social media. On Twitter, he has more than 11k followers, 38k subscribers on YouTube, 250k followers on Instagram, and 428k on TikTok.

Is Brice Rivera dating? Who is his girlfriend?

He is an incredibly secretive person and has rarely ever talked about his personal life. Still, he was once rumored to be dating Peyton Mabry.

The rumor of their relationship first came to the surface when Brice shared a couple of photos with Peyton back in 2016.

But that was a long time ago and most recently there isn’t any rumor of Brice’s linkups.

Brice comes from a well-to-do and had a decent childhood. As of now, we can assume his net worth is around $500,000. On the other hand, his siblings, Brent and Lexi are millionaires.

Brent River’s total worth is $6.5 million and Lexi’s total fortune is around $2 million.