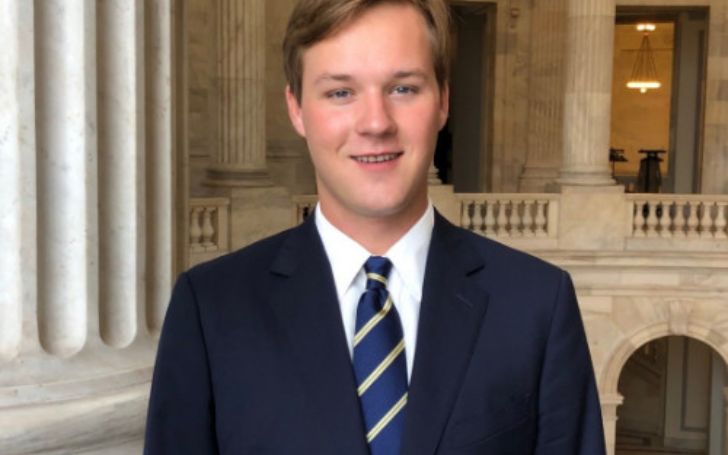 Buckley Carlson is an American star kid who is the son of Tucker Carlson and Susan Andrews. He is the only son between Tucker and Susan. Apart from himself, his parents are the proud parents of three children.

His father Tucker is one of the leading conservating journalists around the country. He currently hosts his own show, Tucker Carlson Tonight.

In this article, let’s find out all that we need to know about Buckley Carlson. Let’s discuss his current whereabouts and find out if he is dating someone or not!

Who is Buckley Carlson?

He was born in 1997 in Virginia. The second child between the Carlson couple, Buckley belongs to the American nationality and Caucasian ethnicity. His parents named him after Tucker’s younger brother, Buckley Swanson Peck Carlson.

Buckley belongs to a mixed ancestry of English, German, Swiss, and Italian. His paternal grandfather, Dick Carlson was adopted by Richard Boynton and Dorothy Anderson.

Besides, Buckley spent the major portion of his childhood in Virginia.

After finishing up his high school in Virginia, Buckley enrolled at the University of Virginia. He joined the Bachelor of Arts program and graduated with Government and Political Science major in 2019.

Since graduating with a Bachelor’s degree Buckley has not joined any Master’s program. Seems like he is still figuring his way out in his professional career.

What is Buckley Carlson doing nowadays?

As of right now, he works as the communications director for Rep Jim Banks, U.S. House of Representatives since January 2021. Before that he used to work as a Special Assistant from June 2019 to January 2020, and as a Press Secretary from January 2020 to January 2021.

Before joining the U.S. House of Representatives, he started his professional life working at The White House as a communication intern. After that, he went on to work at Jeffrey J. Kimbell & Associates as a Policy intern.

Going by his current profession, it is safe to say Buckley is slowly transitioning into a political career. Maybe in the future, we can see him become a political commentator just like his dad.

Buckley’s association with Jim Banks caused problems for his dad

When you are a son of a famous personality, one thing is for certain you will have a lot of unwanted attention and criticism, and when your father is controversial as Tucker Carlson then it makes it all the more complicated.

In October 2022, Tucker was reportedly outraged after a secret GOP strategist called out Jim Banks (R-IN) for hiring Buckley as his communication director. The strategist said,

“Deep down, he dies to be liked by the Establishment. He hires Tucker Carlson’s son, a 24-year-old kid, to be his communications director.”

After the statement, Tucker lashed out at the anonymous strategist over the controversial statement.

Whenever there’s a festive event or any event, Buckley and his siblings get together and spend quality time together. Moreover, Tucker and his wife Susan have brought up their children in a loving and caring manner. This is why they are so cordially bonded with their parents.

Meanwhile, Buckley’s older sister Lillie is a college graduate just like himself while Hopie is still studying in college.

In 2018, Buckley made a lot of headlines when he and his father got into a controversy. The Carlson family had gone for dinner at the Farmington Country Club in Charlottesville, Virginia.

While entering the facility, a stranger stopped and asked one of Tucker’s daughters if she was sitting with Tucker. When she replied that he is my dad, the man apparently hurled insults at her and used foul language. After the incident unfolded, she got back to the table crying.

Upon witnessing his baby sister cry, Buckley stood up and went to the man and confronted him. Then physical altercation broke out between them and numerous leading news outlets claimed Tucker was apparently intoxicated and racist towards the Latino man.

Then in his defense, Tucker also claimed he stopped drinking alcohol several years ago.

Is Buckley Carlson dating? Who is his girlfriend?

As of now, Buckley doesn’t seem to have a girlfriend, at least publically. The star kid is really private when it comes to his personal life. This is why there’s not much information on his dating life.

However, it has been said he is engaged to Kelsey Kilgore, a consultant. Aside from this, there’s not much info about their relationship.

On the other hand, his mom and dad are undeniably an inspiration for all the young couples out there. The pair have been together since their school days. Initially, they met back in 10th grade while studying at the same high school, St. Georges High School in Rhode Island.

But not everything was sunshine and rainbows for the pair. Susan’s father was the headmaster of the college so it was quite difficult for them initially. As time went on, their love for one another also increased. Eventually, while on the verge of graduating from college, Tucker decided to propose to Susan.

They exchanged vows on August 10th, 1991 in the school chapel in a small ceremony.

How much is Buckley Carlson’s net worth?

He has been active professionally for a few years so his net worth cannot be ascertained. But we can say he was brought up in a lavish manner. After all, his father has a total net worth of $30 million.

That being said, we’re sure Buckley will soon carve out a career out for himself.