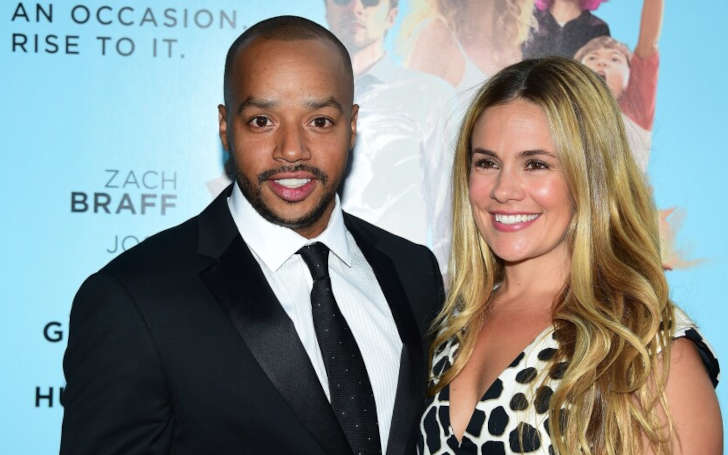 Cacee Cobb is a famous American celebrity spouse who has long been married to actor and comedian Donald Faison. Besides her married life, Cobb made her own name in Hollywood with her work as a personal assistant to singer and actress Jessica Simpson.

Cobb, who is in her mid-40s, actively uses social media, especially Instagram where she shares her lifestyle and her family life. Going through her social media posts, we can say Cacee Cobb is a happy wife and mother. But, is she really happy in her real life as well? How is her married life with actor Donald?

Let’s explore Cacee’s married life and relationship with her husband in the sections to follow. Besides, let’s also have a close look at her early life, education, career endeavors, and more.

Cacee Cobb was Born and Raised in Texas

Cobb was born on December 3, 1977, in Texas. She grew up in her hometown with her younger brother who remains unnamed to date. Cobb hasn’t talked much about her early life and parents in the media, however, she occasionally shares her old pictures on her socials. Besides she has also shared a couple of photos of her parents on her Instagram on special occasions.

Cacee Cobb is an American by nationality and belongs to the White Caucasian ethnicity. When it comes to her education, Cobb went to Marlin High School, Marlin, Texas during the 1990s. Cacee was a cheerleader in her high school and she frequently shares her photos from her cheerleading days on her Instagram.

Back in 2005, Cobb made her appearance on the reality TV series Newlyweds: Nick & Jessica. After that, she appeared in the documentary E! True Hollywood Story. Her other notable TV appearances were in Jessica Simpson: The Price of Beauty (2010) and Undatable (2010). After a long gap, Cobb made her guest appearance in 2021 on a podcast series Fake Doctors, Real Friends with Zach and Donald.

Meanwhile, in 2022, Cacee Cobb worked as an assistant to the producers in seven episodes of the TV series, Alabama Jackson.

Cobb, the 44-year-old American brand marketing manager, and her longtime boyfriend Donald Faison tied the knot in December 2012. The lovebirds got married on December 15, at actor Zach Braff’s home in California.

Cacee and Faison completed nine years as a married couple in December 2021. The former marked the milestone on her Instagram wishing her husband a “happy anniversary.”

Talking of her wedding, Cobb’s longtime friend, singer Jessica Simpson served as the bridesmaid at her wedding. Simpson was seen in a black dress and carrying a bouquet of red roses. As a matter of fact, Jessica’s parents, her then-fiance Eric Johnson, and her sister Ashlee Simpson were also in attendance.

Meanwhile, singer Joshua Radin was the groomsman who shared a photo of him with the groom and Zach Braff on Twitter writing “What a happy day” alongside the photo.

They Became Engaged after Five Years of Dating

Cobb and Faison became engaged more than a year before they officially became husband and wife. Faison’s Scrubs co-star, Braff first broke the news with a tweet in which he congratulated the newly engaged pair. “Just wish I was there to run around you both with sparklers,” wrote the actor in his tweet.

Faison also announced the good news through his Twitter later on. His tweet went like this: “If you like it then you better put a Ring on it. Beyonce. If she likes it then she better say YES!!”

Meanwhile, talking about their relationship, Cobb and her now-husband first met in 2005 at Faison’s friend Zach Braff’s 30th birthday party.

She is a Mother of Two

Cobb and Faison, the husband-and-wife of a decade are proud parents of two children. The lovebirds welcomed their first child, a baby boy on August 15, 2013. Faison announced the good news via Twitter a day later writing, “Yesterday @caceecobb and I welcomed the most amazing little boy into our lives! Oh Happy Day!!” Meanwhile, the happy mother said “The happiest day of my life.”

Cobb and Faison had kept their baby boy’s name secret, however, the ecstatic mother couldn’t keep it a secret for a long time as she jokingly revealed her son’s name as Rocco.

“Imagine if you and your best friend were pregnant at the same time — Cacee’s loving it. They hang out all the time anyway, but now they hang out and talk baby stuff, look at baby stuff online, and go shopping for baby stuff together.”

Less than two years after the birth of their first child, the husband and wife gave birth to their second child, a daughter,  Wilder Frances Faison on April 23, 2015. The doting mother introduced her newborn daughter to her fans the following day via Instagram. “Meet the newest love of our life, Wilder Frances Faison,” Cobb captioned the photo.

She is a Step Mother of Four Kids

Besides being a wonderful mother to her two children, Cacee Cobb is also a stepmother to four kids of her husband Donald Faison. Faison fathered his first son, Shawn Faison in 1997, with his then-girlfriend Audrey Ince.

Cacee’s marriage to her spouse Faison was her first while her husband himself was married and divorced previously. Faison was married to Lisa Askey from 2001 to 2005. The former husband-and-wife started dating in 1997 after initially meeting during her time in nursing school and dated for four years before tying the knot.

Faison has three children with his first wife, Lisa. To this date, the actor hasn’t talked about his divorce from his first wife, however, we believe the former pair separated due to their irreconcilable differences.

Meanwhile, Faison’s ex-wife, Lisa died in March 2017 due to some unknown circumstances. The Scrubs actor paid a heartfelt tribute to his former wife in a lengthy Instagram post on March 2, 2017.

The photo was originally posted by Faison and Lisa’s son Dade which shows him holding onto his late mother’s hand. “I love you with all my heart and one day we shall meet again,” wrote the grief-stricken Dade.

What is Cacee Cobb Net Worth? Also Know Her Husband’s Net Worth

Cobb has long been busy taking care of her young children. Soon after her marriage to Donald Faison, she welcomed two children and she became a full-time mother after that. So, she hasn’t been engaged in any other profession as of now. Due to this fact, we are bound to say Cacee Cobb doesn’t have any significant net worth as of 2022.

But, on the other hand, Cobb’s spouse, Faison is a successful actor who has raked a good sum of money from his acting career. As of 2022, Faison has $12 million in net worth.

Who Is Sheryl Goddard? Career & Marriage With Husband Alice Cooper