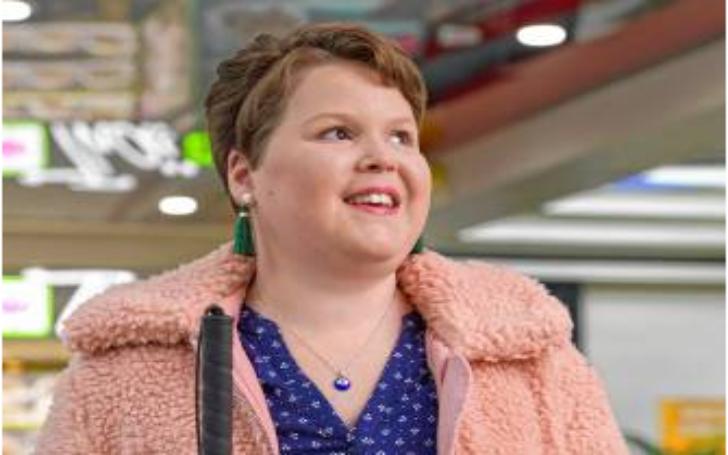 Calle Walton is a well-known actress who rose to fame after her role in the series In The Dark. Despite being visually impaired she has been able to make a name in the industry on her own. She has been able to inspire many other differently able people after being part of one of the popular series.

Apart from being an actress, people don’t know much about her. She likes to keep her life low-key. However, people are curious to know about her personal life and her journey in the industry. How difficult was it for the actress to perform like a normal actress? Furthermore, people are also curious to know bout how she lost her vision.

Well, we will be discussing everything about the actress in this article. Stay with us to find out more about Calle Walton including her personal life and her journey in the industry.

She was born on the 7th of March, 2000 in New Hampshire. She was born to her father Iain Walton and her mother Tracey Bean. Despite being a famous name in the media, she has not revealed much about her early childhood days.

Going through her social media she does have an older brother. However, not much is known about her brother.

Talking further about her education, Calle attended school at W.Ross Macdonald School. She once revealed in an old interview that she was interested in acting since her school days.

What is Calle Walton’s Gender?

We are sure many of you might be curious to know what is Calle’s gender. Well, allow us to clear all the doubt if there is any left. She is a female and not male, like many of you are claiming to be.

How did Calle Walton lose her eyesight?

She was very small when she lost her eyesight. She once revealed that she was in grade three when she started feeling some kind of pain in her eyes. When her parents took her to the hospital, doctors found that a mass was found in her optic nerve which was causing inflammation in the eyes after the diagnosis.

After that, she started taking medication for eight years. However, she was not recovering instead her condition was getting worse. She started losing her sight vividly. When she was about to complete her school, the doctors claimed that the previous diagnosis was not correct and she was diagnosed with cancer. They also claimed that the cancer was a defect since her birth.

Despite using the medications and spending a lot of money on her treatment, she eventually lost her eyesight. It has been a long time since Calle is spending her life without vision. Unfortunately, there is very little chance that she will be able to gain her sight back.

She Rose To Fame After The Series In the Dark

As aforementioned, Calle was always interested in acting. She used to take part in plays and dramas during her school days. But she almost lost her hope of being an actress when she lost her sight. But destiny has some other plans. Her dreams finally came true after she got an opportunity to work in the series, In The Dark.

The star also revealed that she was not ready to act as she was hesitating because of her eye condition. Nevertheless, she somehow managed to convince herself to grab the opportunity as thankfully in the movie, she had to act the way she is, like a blind person. She was selected as the character who was also visually impaired in the series.

Finally, she made her debut in the television series In The Dark in 2019 when she was only 19 years old. The series is still going on and she has not appeared in any other projects yet. However, she was able to gain fame overnight because of her single project.

About the series, In The Dark

In The Dark is an American crime-drama television series created by Corinne Kingsbury. The show debuted in 2019 on television. The series is about a blind woman in her twenties who is struggling through her life because of being visually impaired since the age of 14.

In the series, she finds out about her friend’s murder and tries to solve the case by herself. It shows how a struggling visually impaired woman finds a way to solve the murder case.

Apart from the movie plot, the viewers instantly connected to the series after having a differently abled cast as part of the movie. Many people disclosed that they can relate to the series as they have been going through similar situations after losing their vision due to any reason.

Moreover, the series is based on a true story and is inspired by In the Dark: The True Story of the Blackout Ripper Mass Market Paperback – November 7, 2006.

Why Were People Protesting Against The Series?

As per one of the articles from the New York Times, the National Federation of the Blind which is one of the strongest, largest, and politically active blindness organizations in the country announced a protest against the series in March 2019 just before the premiere of the series. As per the organization, they were against the series for selecting a sighted actress in the role of a visually impaired character.

The organization was demanding a visually impaired actress for authenticity also they claim that many blind actors do not get opportunities because of this reason. The NFB’s president Mark Riccobono added,

“Blind actors are looking for work, and no sighted actor, however accomplished or talented, can bring the same insight and authenticity to a blind character.”

Talking further about the series, the cast was not replaced by another actor. The actress Perry Mattfeld played the lead role of Murphy. They selected Calle Walton for the role of Chloe Riley who is visually impaired in real life.

Calle has been very secretive about her dating life. She has not mentioned anyone as her boyfriend yet. The 19-year-old actress is currently focused on her career and is working hard to maintain her name in the industry. As of 2022, she is single and not dating anyone.

What is She Currently Doing?

Calle is still working in the same series named In The Dark. She completed high school and Calle is currently planning to join college. She is focused on her acting career and might pursue her college degree in acting.

Is She Available On Social Media Platforms?

Calle Walton is not much active on their social media handle. However, she is available on Facebook and has shared many pictures of her childhood. She does not seem to post quite often these days.

What is Calle Walton’s Net Worth?

She will be able to gain more fortune in the future as she is continuing her acting career.