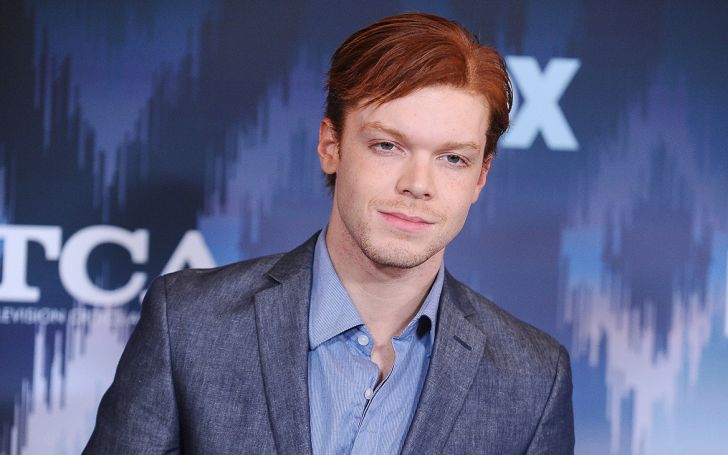 Ever since appearing as a gay man in the series, Shameless, Cameron Monaghan raised many eyebrows on his real sexuality. His performance was so impeccable that if at the time he was not dating Peyton List, surely many would definitely say he is indeed gay.

Regardless, Cameron broke-up with his then-girlfriend Peyton in 2019. His fans are now curious, is Cameron Monaghan dating or single? Well, you might be happy or sad to know this but it looks like he has a new lover, ladies, and gents.

Today let’s dive into the life of Cameron and find out all that you need to know about his handsome heartthrob’s relationships.

Who is Cameron Monaghan Girlfriend 2021? He is officially dating

The Gotham star at the moment is indeed in a new relationship. Yes, you heard it right! The handsome hunk as of 2021, is dating model Lauren Searle. The bloke made his relationship official via his Instagram account.

In the photo that he shared, Cameron is sitting on top of his new gf as he leans on for a kiss. The photo is taken from inside a tent where the duo might’ve spent a romantic time together.

In the picture, Cameron wrote in the comment section, ‘Mentally still here.’ There is no knowledge about since when is the pair dating, but given Cameron’s nature, he might’ve been going out with her for some time before making it official.

Although this is the first photo Cameron had shared publically with her, just a few days ago he also added a story featuring his new gf as well.

Cameron’s new lover is a model

Upon knowing about his current relationship status, many of you might be dying to know who is Lauren Searle? Well, for starters she is a model at Vision Los Angeles and Heros Model.

The ravishing model is an up and coming star. She has over 150k followers on her Instagram handle, @laurensearle. Apart from that, she is a dog lover and owns a pet pooch named Bentley.

please, no one tell bentley how heavily I was flirting with toby today

In addition, Monaghan’s newest romantic interest also has a tattoo of a butterfly on her left arm.

Besides, this is Cameron’s only known relationship since calling it quits with, Peyton List.

Well, for those who only follow Cameron then surely you don’t know that his lover had already made their affair public in September of 2021. Yes, the photo Cameron added was from their hiking trip one month ago.

In a series of photos, Lauren added numerous photos from their hiking adventure. Going by their photos, the couple had a great time together.

According to eagle-eyed fans, the pair met a couple of months ago.

Cameron Monaghan & Peyton List: A look at their romance

Cameron dated Peyton for around 2-years before calling it quits back in January 2019. They first met each other while working in the movie, Anthem of a Teenage Prophet.

In the movie, they played each other’s love interests. After knowing one another throughout the movie, the former flames decided to go out on a date.

Peyton once said in an interview that she and Peyton got attracted while working together and later found out they like each other. At the time, she gushed, “He’s so understanding which is so nice and I am too.”

Why Did Cameron and Peyton broke-up?

The news of their break-up surprised fans as they looked wonderful together. At the time, fans were wondering why did Cameron and Peyton broke-up?

The actual reason for their break-up didn’t come but many are attributing it to their busy schedules. Regardless of their split, the former flames remain civil to each other and are still good friends.

At the time of their break-up, they still attended several events together. Peyton and Cameron went to the premiere of Anthem of a Teenage Prophet, days after their split.

E!Online first broke the news of their split. According to reports, they got separated over the holiday season. Ever since breaking-up, just like Cameron, Peyton isn’t in a relationship with anyone.

However, she was linked with NBA star, Zion Williamson after he shared a picture of them on his Instagram. Reports suggest it was just a friendly meet and nothing else.

Previously, the 26-year-old was in a relationship with two beautiful ladies.

His first relationship came out in 2015 when he dated the British born model, Sadie Newman. The couple dated back in 2015 but they went there separate ways in the same year.

Upon breaking-up with Sadie, he went out with his Shameless co-star, Ruby Modine from 2016-2017.

Is Cameron Monaghan Gay? The truth about his sexuality

Ever since portraying the character of a gay person in the series, Shameless, fans were curious about Cameron’s sexual orientation.

Upon witnessing Cameron’ character, Ian kissing Noel Fisher‘s character Mickey, the LGBT community was almost sure the actor is gay. He played the part perfectly leading people to believe he is definitely not straight.

Well, that’s good acting on our books and no, the California native hasn’t said anything about being gay. Nevertheless, his past link-ups clearly depicts his sexual orientation as straight.

Be that as it may, we’ve all seen numerous celebrities who dated the opposite sex only to reveal later on that they were gay.