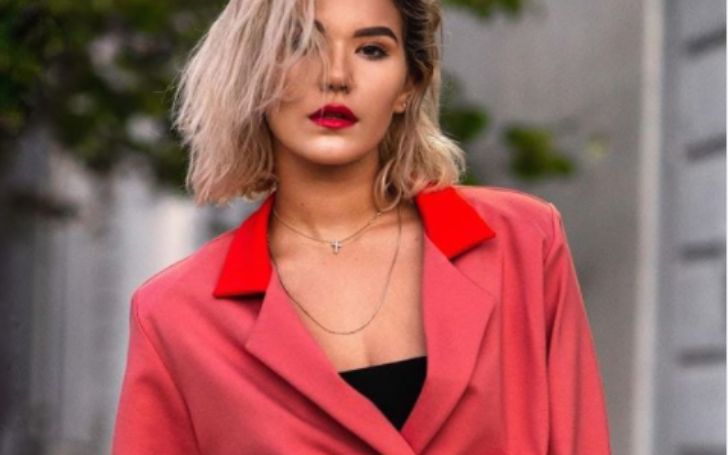 Camia Marie is an American model who came to prominence after appearing in several music videos. She gained additional recognization after she dated actor, Rome Flynn.

The gorgeous model has since moved on and married someone else. Who is her new husband? Find out all about her personal life and career here today!

All about Camia Maria Family: Her Parents and Siblings

The sizzling sensation grew up in Phoenix, Arizona, and currently lives in Los Angeles, California. has been in the spotlight for several years now but she is yet to reveal information on her personal life. She has shared pictures of her mother and father a few times but other than that there is absolutely nothing about them.

Some time back Camia’s mom was in an accident. According to an old post made by Camia, she stated her mother got into a motorcycle accident. Back then Camia posted a picture of her mother and explained vividly her condition in the caption.

Maria said in the caption that we often take things for granted but once we lose something then only we know the importance. She wrote,

“It’s too often we take things for granted. . Like one simple breath.. Please , everyone. . Send your love and prayers my mommy’s way, as she was in a motorcycle accident today. . thankfully, she’s still breathing. . surgery is in the morning. . i pray for a fast recovery. Stay strong for me please, mommy. .🙏🏾 i know your a rider. . Don’t know what I’d do without you.. Don’t worry.. i’m on my way;; LA-AZ. . I love you more than anything.”

Meanwhile, Camia’s father also went through a health scare as well. The nature of his problem isn’t known but we can say for sure it was a rather serious operation.

Other than the aforementioned information, not much is known about Camia’s parents.

Does Camia Maria have siblings? She does have a sister

In addition, River’s mom, Maria Chaidez also calls Camia her daughter which further solidifies their relationship. However, after thorough research, we found out that Camia and River are not biological sisters but cousins.

Despite being cousins, both of them are cordial with each other. Camia even sees River’s mom as her own. Her mother even shares pictures of Camia and River together on her Instagram, showcasing their terrific bond.

Safe to say, Camia shares a good bond with his cousin sister, and aunty.

Camia is the niece of NFL star Daniel Munyer

It might come as a surprise to many of you that Camia is the niece of the American football player, Daniel Munyer. Yes, this is the same Daniel who plays as the football guard for Tennessee Titan.

Nobody knew about her relationship with the powerful football guard until she added a picture with him and cited him as her uncle in the caption section.

I don’t play favoritism but if I had a favorite uncle , it’d be you ♥️💯 @bigmuney52

Camia Marie is married: Who is her husband?

The hot bombshell is happily married to her husband, Anthony Williamson. The duo exchanged vows in July 2020, in a beautiful ceremony held at BJ s House in Florida. The nuptials was attended by many of Camia and Anthony’s friends and family.

While talking about the wedding dress, Camia looked drop-dead gorgeous in a pure white dress with a long veil. On the other hand, the groom looked dapper in a dark blue suit.

As for who is Camia’s husband Anthony? Well, he is an Engineer who serves as a Project Engineer at the Coastal Construction Company. He is a Florida State University graduate. He grew up in Florida.

Besides, the lovebirds are yet to say anything regards to when they started dating. They shared their first-ever photo together in July 2019. At the time, the pair had gone on a trip to Costa Rica. Safe to say, the pair might’ve started dating around the same time.

She welcomed her first child with her husband Anthony

In May of 2020, the beautiful model announced via Instagram that she is pregnant. In the picture that she added, Camia is seen holding her hands as she laughs candidly.

After some time after the announcement, the lady also revealed the gender of her upcoming child, it was a boy. Well, Camia finally welcomed her first child in December 2021. The duo named their child Alyn Anthony Williamson.

Following the birth of their first child, she posted a beautiful photo of her baby boy on her Instagram. Check out the post here.

Prior to the birth, her child was diagnosed with Gastroschisis, which is a birth defect of the abdominal wall. Well, the child was treated rightly is fine and healthy at present.

Of all her relationships, Camia’s most famous relationship would be her lovey-dovey with Rome Flynn. The pair started dating in 2015 after meeting each other outside Camia’s house. 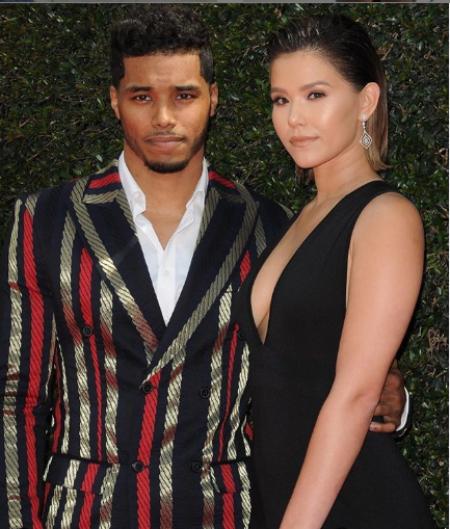 Recalling their first magical meeting, Rome once said in an interview,

“Camia Marie,
We met outside of her house.
We kissed,
Our teeth touched.
The rest is history.”

The former flames dated for around 3-years-before calling it quits. The reason behind their amicable separation is not disclosed.

No, Camia is not the mother of Rome’s daughter and in reality, it is Molly Noriko Hurley, Rome’s ex-girlfriend, who is the biological mother of Kimiko Flynn.

Besides, rumors regarding Camia’s apparent relationship with Rome’s child started when she shared a lot of photos of them together on her social media handle. To this day, despite her breakup with Rome, she is yet to delete pictures with Kimiko.

Truth be told, they really looked like mother and daughter but that’s not the case here.

Was in a long-term relationship with rapper Roshon

Prior to getting married, Camia was in an enduring relationship with American rapper and actor, Roshon Fegan. The couple had started dating in 2008. At the time, Camia was only 14-years-old.

Reportedly, the lovebirds knew each other for some time before they started going out. While the two were dating, they were literal relationship goals. Fans used the ship the pair a lot.

Her now ex-boyfriend Roshon is an actor famous for appearing in the TV series, Greenleaf alongside Keith David, Lynn Whitfield, Deborah Joy Winans, and more.

Sadly, Camia and Roshon called it quits after dating for several years.

How much is Camia Marie’s Net Worth?

As of 2022, we can estimate her net worth at $250,000. She primarily earns her fortune from her career as a model. So far, she has appeared in several music videos.

Moreover, she often models for several brands as well. She also affiliates several products through her Instagram account which further adds to her total fortune.

Who is Rome Flynn Wife? Is it Camia Marie? Shares Daughter with Molly Noriko Hurley