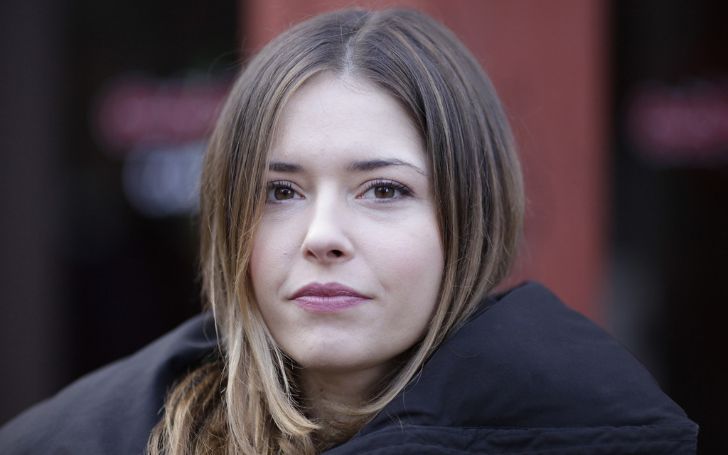 Canadian actress Sarah Lind is popular for her work in television series like Mentors, Edgemont, True Justice, and a number of other movies including A Beautiful Place to Die as well. Starting out professionally with the 1997 TV series The Lost Daughter, Sarah has come a long way in her career.

However, when it comes to her personal life, things seem a little hazy. The beautiful actress was married but it seems she has already moved on from her marital relationship. Recently Sarah came up with a post announcing her divorce from her husband Tygh Runyan, actor and musician.

But what could be the reason behind their split? Did they have any children? There are tons of questions surrounding Sarah and Tygh.

Further, we will also talk about Sarah Lind’s career, net worth, and her relationship status as of 2021.

Sarah Lind Movies & TV Works: She Appeared In Every Episode of Edgemont

Sarah began her career in the 1997 TV series The Lost Daughter, where she played a 14 years old named Young Laurie.

Her major role came in Honey, I Shrunk the Kids: The TV Show in 1998. However, she gained major exposure as Dee Sampson in the 1998-2000 TV series Mentors. She played the main character in two seasons of the show.

Her next most successful role was in Edgemont, where she appeared from 2001 to 2005 as Jennifer “Jen” MacMahon.

Following this, she appeared in TV series like Wolf Lake, The Dead Zone, Dead Like Me, Human Cargo, Five Days to Midnight, Selling Innocence, Blade: The Series, Smallville. But her next big project only came in True Justice where she played the lead Sarah Montgomery. She was part of the series from 2010 to 2012.

Talking about her recent TV appearances, she has been a part of Taken(2018), Shattered Memories(2018). In 2020, she appeared in the TV film A Beautiful Place to Die: A Martha’s Vineyard Mystery. She also appeared in the 2015 TV series Fargo, which also stars actors like Colin Hanks, Jesse Plemons, among others in the lead.

Aside from all the TV works, Lind has also been part of many successful movies. Starting out as Liz in the 2002 film Punch, she has already appeared in over a dozen movies.

Here is the list of some of the movies Sarah has appeared in.

Though Sarah has a decently successful career, her married life does not seem as much success. 38 years old Sarah Lind was married to Canadian actor Tygh Runyan. In fact, the couple was pretty out about their relationship.

Her now ex-husband Tygh even had a few of their photos of themselves together on his Instagram. And needless to say, they look pretty adorable together. Check this out.

However, the actress recently announced her divorce with Tygh. Lind took to Twitter to announced the news on August 15, 2020, and she rather looked pretty excited about her split.

While they have not revealed the exact reason behind their separation yet, Sarah and Tygh had been married since 2008, as per sources.

Does she have any children with her ex-husband?

It looks like she does not have any children. Though she was married for a long time, they didn’t seem to have ever considered having any kid.

Is Sarah Lind Dating a Boyfriend?

Though Sarah is now a divorced woman, she has not announced anything concerning her relationship status at present. Thus, it is safe to say she is single and not dating anyone.

Sarah’s Ex-Husband Tygh Is An Actor And Singer

Like Sarah, her ex-husband Tygh is also an actor and a singer as well. Tygh began his acting career in 1993 appearing in the film named Judgment Day: The John List Story. Ever since he has appeared in many successful films.

Some of his most successful roles include Dr. Robert Caine in Stargate Universe, & Fabien Marchal in Versailles.

Further, some of his other movies are Various Positions, Comforting Skin, The Brother, and Road to Nowhere.

Tygh has decent accomplishments as a musician as well. He has worked with many bands so far. As of 2020, he plays in the Los Angeles band Corredor.

Likewise, in the past, he was the band member of Beans and The Awkward stage as well. With the band, he has scored for the film including Various Positions and Control Alt Delete.