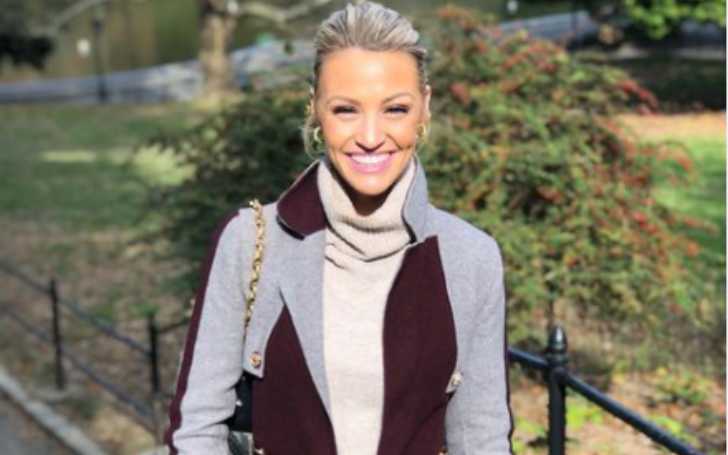 Carley Shimkus is a media personality who shot to fame for her work on the FOX News Channel. She is also popular as a co-host on “Fox and Friends First” and has established herself in the industry as a reporter as well as an anchor.

Apart from her identity as a reporter, she is also quite active on her social platforms with millions of followers. Besides, she is also doing great in her love life. She is married to her long-time husband and is happy in her marital relationship. Well, who is her husband? Does she have children?

Dive into the article below to find out the details surrounding her hometown, birthday, husband, mother, salary, and many more. Stay with us till the end to know all about the FOX News reporter; Carley Shimkus.

When Was Carley Shimkus Born?

She was born Carley Noelle Shimkus on November 7, 1986, in Long Valley, New Jersey, U.S.A. As of 2022, she is 36 years old. The reporter has American nationality and comes from a Caucasian ethnic background.

Furthermore, she was born under the sign Scorpio and follows Christianity. Also, she spent her childhood in her hometown and was raised alongside her sister.

Shimkus was born to her father Edward Shimkus and mother Zulma M. Shimkus. Since the daughter cares about her parent’s privacy, she hasn’t revealed much about them other than their names.

However, according to some sources, her mother used to work as a flight attendant. Meanwhile, her father is an account manager at Galata Chemicals.

Well, Carley is not the only child of her mom and dad. She also has an elder sister, Margot Shimkus who is already married. As the news reporter’s siblings maintain a low profile, not much is known about her.

Now, coming to Carley’s education, she enrolled at Quinnipiac University in 2005 and graduated in 2009. She finished her Bachelor’s degree in Arts with a major in Broadcast Journalism. In addition, she also entered George Washington University in 2008.

Is Carley Shimkus Married? Who Is Her Husband?

Yes, Carley Shimkus is happy in her matrimonial with her husband Peter Buchignani, a businessman. While multiple tabloids have speculated that the lovebirds met on Carley’s 23rd birthday in 2009, they have not themselves shared about their first meeting.

However, the couple only started dating in 2013 and dated a couple of years before marriage. Eventually, the husband and wife walked down the aisle on 8 August 2015. Their wedding ceremony was celebrated at Fiddlers Elbow Country Club in Bedminster, New Jersey.

Does Shimkus Have Children?

Talking about their children, the pair doesn’t seem to have any kids at present. They seem busy in their careers now and maybe aren’t ready to have babies yet. On the contrary, the couple was once rumored to have a baby girl named Zoe. But looking at her Insta, it seems like it was her friend’s daughter.

Well, let’s hope, the duo will come up with some good news soon.

What Happened to Carley Shimkus On Fox News?

While rumors circulated that Carley on Fox News is leaving the show because of her baby, it was just the talk of the town. There was some misunderstanding regarding her having a child. As a matter of fact, she hasn’t conceived since her nuptials or has talked about any plans regarding becoming a mother.

Carley Shimkus’ Has Thousands Of Followers On Her Social Platform

Apart from being a news reporter, Carley is a big-time social butterfly. She keeps updating her fans about her whereabouts through her social media handle.

Shimkus has a total of over a million fans and followers on her social media handle. It has become a medium for her to reach her fans and update her works. Moreover, her feeds are filled with beautiful pictures of her.

Shimkus has successfully established her career in the industry as a co-host, reporter, news anchor, and headline reporter. Furthermore, she is also a Fox Business Network producer. Besides, she also worked as an associate producer in the movie Imus in the Morning (2007).

Carley joined Fox News in 2009 after her graduation as an intern. Following her internship, she started working there as a Fox News Headlines 24/7 reporter in 2016. Eventually, she ended up as a co-host on “Fox and Friends First” on October 29, 2021.

What Is The Net Worth Of Carley Shimkus?

Working as a media person for more than a decade, she must have amassed a good fortune. Even though her salary is not clear, she has a net worth of more than $1 million. She has collected her total assets from her media profession.

How Tall Is Carley On Fox? Her Physical Appearance

Carley’s height is 5 feet and 10 inches tall. She is a tall and beautiful woman with blonde hair and a blue set of eyes.

Amanda Balionis Is Engaged: Some Interesting Facts About Her