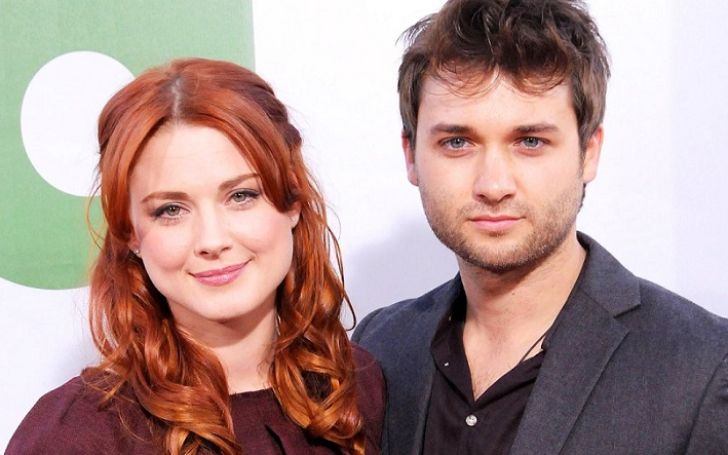 Casey Hooper is the lead guitarist for the pop princess, Katy Perry. The artist has performed in a number of major Perry’s concerts all over the world.

Hooper is also popular as the husband of The Walking Dead actress Alexandra Breckenridge. Apart from a blissful marriage life, the adorable couple is also blessed with two children.

You’re curious as to how did the two first meet? And how long have they been married? We have all the answers here!

The article also includes Casey’s career and other intricate details about his life!

Casey Hooper and wife Alexandra married in September 2015: Details of their intimate wedding

Casey tied the knot with Alexandra on 13th September 2015. The couple organized their wedding at Dunton Hot Springs, Colorado. They walked down the aisle in the presence of their close family and friends.

Their wedding photos were exclusively taken by Chowen Photography.

The couple dated for years before their engagement in 2014

As per sources, Alexandra first met her then-future-husband Casey at Grammys after-party back in the early 2010s. Apparently, they both were living in California.

The actress shared the first photo of her guitarist boyfriend on Insta in August 2012. They dated for a couple of years before Alexandra announced her engagement on 16th Sep 2014 through her Instagram account. She wrote on the photo, “We have Engaged! ❤️.”

They exchanged their vows in the following year and are still happily married with no conflict between the pair.

Alexandra and her husband Casey have two children

The power couple is the proud parents of two children. Casey’s wife Breckenridge gave birth to their first child, a son named Jack Breckenridge Hooper on 3rd September 2016. He weighed 9 lbs., 1 oz, and was 21 inches long at the time of his birth.

At the time, Alexandra told People, “When I first held my baby, the world melted away and I knew he was the most important thing I’d ever do.”

Initially, the actress announced her pregnancy back in June of the year.

In addition, the duo welcomed their second child, a daughter Billie Breckenridge Hooper on 6th December 2017. The new mom told People, “We are so excited to have a boy and a girl!”

Alexandra unveiled her pregnancy with the second child posting a photo of her baby bump on 16th August. She captioned the picture, “We made another one!! Baby Breckenridge Hooper coming this winter.”

Hooper currently resides in a two-story house in a quiet community just outside Atlanta with his wife and two kids.

Both of them are also avid tattoo lovers. They have inked many arts on their body. Her hubby Hopper has inscribed an Eagle tattoo on his right hand.

Casey Hooper is the lead guitarist of Katy Perry. He had also auditioned to be a guitarist for Selena Gomez, Adam Lambert, and Avril Lavigne. Still, in the end, he became Perry’s lead guitarist.

The accomplished guitarist toured several countries performing numerous crazy concerts with pop singer Perry. He performed at the world parachuting championship in Dubai. Furthermore, Casey appeared at the opening of the cricket season in India.

He also performed along with the Midnight Squires, led by Django James. He previously played guitar for Loomis & the Lust, an independent California pop-rock band founded in 2008.

Hooper was born on July 16, 1986, in Johnston, Iowa. He is the son of Dave Hooper (father) and Rebecca Cartwright (mother). His parents divorced early on and now they both are both married to other people.

His dad runs a family business Action Warehouse in Des Moines. The business was founded by Casey’s paternal grandparents, Leland and Norma Jean in 1978. It has 50 employees.

He also has a brother named Spencer Cartwright who suffers from Down syndrome. He works at a local grocery store.

Hooper had a passion for music since high school

Casey was quite interested in music especially in playing some musical instruments since childhood. He received a Stratocaster guitar on his 13th birthday. He attended Johnston High School and graduated in 2005.

Hooper later went to Los Angeles and started studying a two-year program at Musicians Institute. But he left the music school after half-year.

Casey Hooper has made a good amount of money from his music career. However, the exact amount of his net worth is yet to be revealed. On the other side, his wife Alexandra has a net worth of $2 million as per Celebrity Net Worth.

The actress has worked in a number of hit TV shows like Family Guy, American Horror Story, The Walking Dead, and This Is Us.