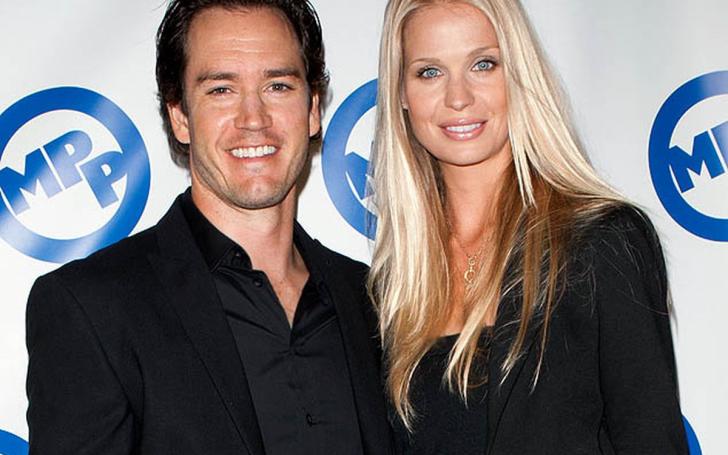 Catriona McGinn is an Interior designer, famous as actor Mark-Paul Gosselaar‘s wife. Her husband Paul came to prominence after his role as a child actor in Saved by the Bell. For his role, Gosselaar even won the Young Artist Award.

When you are married to a big Hollywood star, fans will most definitely want to find out more about your life. After all, you have to be someone special to win the heart of one of the leading actors around. Well, on Catriona’s behalf we can say that her professional career is on par with her hubby’s.

So what does Catriona do for a living? Let’s find out here and also take a look at her early life and education.

Catriona Hope McGinn was born on June 22nd, 1978 in Canada. After marrying Mark, who is an American, she became a dual citizen of America and Canada. She belongs to the Caucasian ethnicity and has Irish ancestry.

The star wife was brought up by her parents in Canada. She is an incredibly private person because of which there’s not much info available about her parents and siblings.

After completing her high school education, Catriona joined McGill University for her bachelor’s degree in 1998. She finished her Bachelor’s Degree in Communication & Psychology in 2002. She majored in Media Studies, Cognitive & Child Psychology.

Catriona then studied at Simon Fraser University in British Columbia, Canada. At the college, she studied Public Relations, Advertising, and Applied Communication.

Going by her educational background, it is safe to say Catriona is quite intellectual. Well, it is self-explanatory that Catriona wins all the arguments in the Gosselaar household. Pun intended!

Catriona McGinn Career: Is She an actor like Her Husband?

When the handsome heartthrob Mark decided to marry Catriona, his fans were expecting her to be an actor or a model. However, McGinn comes from different backgrounds altogether.

Initially, Catriona started her professional career as an editor in NewCanadian Magazine. Then from 2003 to 2006, she worked as Operations Manager at SparkNet Communications. From 2006 to 2010, she was a General Manager at The Nielson Company.

After a couple of dead-end jobs, she found her calling at Paskal Lamour. She joined the organization in the year 2010 and has since been working as Co-Founder, Director of Sales & Marketing. Apart from this, she is also working as an Interior Design Associate at Jeff Lewis Design.

From the short description of her professional career alone we can easily say she is a multi-faceted individual. No wonder Mark fell in love with this ambitious woman.

While talking to the magazine, Mark talked about his involvement with the nuptial. He said, “I’m too type-A to let it happen around me. We’re trying to make it as traditional as possible. It’s going to be fun!”

The Saved By the Bell star further added, “Trust me, we are going to eat our a––es off!” he told PEOPLE. “We’re really excited about that element.”

The pair had been engaged just a year ago in August 2011. The Franklin & Bash star popped the question to this significant other with a gorgeous 5-carat cushion-cut diamond ring. The band was custom-made by Mark’s friend, Neil Lane.

At the time of his engagement, a source said, “He couldn’t wait to propose. He was so excited to have found the woman of his dreams.”

Catriona McGinn is a mother of two children

Their marriage couldn’t be said complete without the mention of their two children. The beautiful model welcomed her first child, a son named Dekker Edward Gosselaar on September 30th, 2013. “We are overjoyed with the new addition to our family. We are madly in love with our little boy,” Mark said at the time.

Around 16-months after the birth of their first child, Catriona gave birth to the pair’s second child together, a daughter whom they named Lachlyn Hope Gosselaar on February 17th, 2015. After the arrival of his fourth child overall, Mark tweeted, “So in love with our new baby girl. Mum and baby are healthy and happy. 2 boys, 2 girls, too perfect!”

Although Catriona is the daughter of two children, her husband Mark already shares two children from his previous relationship.

Catriona’s husband Mark Gosselaar was once married before: What about her past affairs?

Many of you might already know that Mark was once married to the gorgeous actress, Lisa Ann Russell. The former flames tied the knot on August 26th, 1996 in an intimate ceremony. According to reports the couple met for the first time in the 1990s.

From their relationship, the lovebirds became a parent of two beautiful children. Their eldest child Michael Charles Gosselaar was born on January 31st, 2004, in Los Angeles. Just a couple of months after the birth of their first child, they welcomed their second kid, Ava Lorenn Gosselaar in 2006. All four of Mark’s children are incredibly close with each other. Although they share half-biological relationships, the four kids share a bond similar to biological ones.

On the other hand, Catriona wasn’t married to anyone before Mark.

How much is Catriona McGinn’s net worth?

As of now, her net worth is $3 million as 0f 2021. Not a surprise to know here as Catriona works in a top position in her organization. In addition, McGinn’s husband Mark has a total fortune of $8 million. The family of four lives at their residence in Santa Clarita Valley.

Born and raised in Panorama City, Mark-Paul Gosselaar, 47 is one of the leading actors in Hollywood. He grabbed attention after her role as Zack Morris in Saved by the Bell. He also won a Young Artist Award for his work on the project. His other on-screen credits include Mixed-ish, Franklin & Bash, Dead Man on Campus, and more.