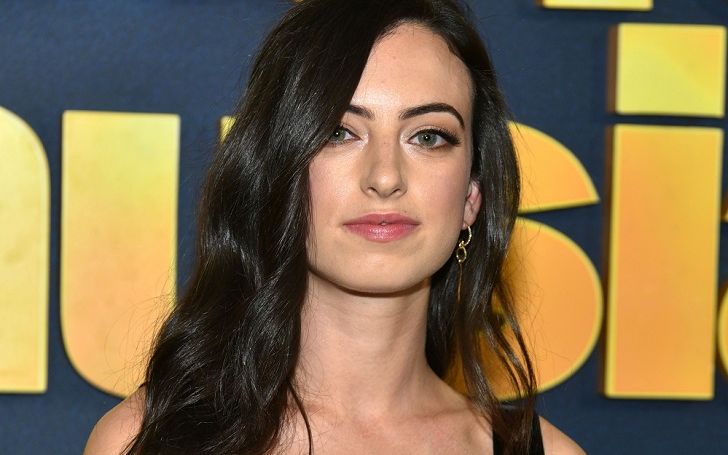 Cazzie David, 27, is the eldest daughter of one of the prominent comedians and writers Larry David and ex-wife Laurie David, an environmental activist.

Cazzie has followed in her father’s footsteps and has also made quite a big name in the industry. What’s more, the famed star kid has also garnered a substantial amount of fortune as well.

Besides her high-profile family and prolific entertainment career, Cazzzie became the hot topic on the web after her two-year whirlwind romance with Ariana Grande‘s ex-fiance Pete Davidson, 27.

Who is Cazzie David? About Her Mom and Dad

David was born on 10th May 1994, in California. She is the oldest daughter of Larry David and Laurie David. Her doting father gained huge popularity after created and starred on the smash-hit HBO series Curb Your Enthusiasm. Larry is also the recipient of several prestigious accolades including two Primetime Emmy Awards and many others.

While talking about her mother Laurie, she is known for her exemplary humanitarian efforts. The long-time environmental activist also served as a producer for the Academy Award-winning film, An Inconvenient Truth (2006).

Cazzie David’s Parents Divorced when She Was 13

Larry and his wife Laurie got divorced after a 14-year of marriage journey in 2007. The former celebrity couple initially tied the knot on 31st March 1993.

After their separation, Larry made headlines when he started dating then 41-year-old actress Amy Landecker back in August 2011. At the time, Amy was still married to her journalist husband Jackson Lynch.

Cazzie Has a Younger Sister

David grew up along with her younger sister Romy David, 25. Romy is also an actress who worked in Hannah Montana (2006).

Thank God u exist so I wasn’t put in photos like this alone. Happy birthday @romydavid !!! 🍰🍰🍰

They share a good bond with each other. Cazzie usually shares photos with her sibling on occasions such as birthdays or siblings’ days.

Her nationality is American and belongs to the white ethnicity.

Cazzie attended the Boston-based school Emerson College. She graduated with a B.A. in Writing for Film and TV in 2016.

On 19th December 2015, the actress also shared a snap of her school ID with two of her pals Elisa Kalani and Daniel Turkiewicz‘s ID cards. She captioned the snap, “we out.”

✌️ out u weirdos

Besides, Cazzie once spent a full summer interning at Vanity Fair, a popular monthly magazine.

Cazzie David Is an Actress

David scored her first role at the age of 13 appearing in the TV series Hannah Montana. After a huge gap, Cazzie appeared in another TV project CollegeHumor Originals as a student in 2016.

David made a breakthrough playing Remi in the hit TV miniseries, Eighty-Sixed in 2017.

Is also an Executive Producer and Writer

Cazzie served as an executive producer for Eighty-Sixed in 2017 and Half-Empty (TV movie) in 2019. She also directed and created several episodes of Eighty-Sixed.

Back in mid of 2021, Cazzie and John were spotted, enjoying dinner at sushi restaurant Katsuya in New York City. The two were reportedly seen laughing and talking while having a meal. While most of their fans started speculating whether the two began dating, a source close to Mayer E! News told that the artist is single now.

So, it is safe to say, David is also not dating anyone officially as of 2021. The actress has kept all the details of her love life under the radar after break up with her ex-boyfriend, Pete Davidson. But

Cazzie started dating The Saturday Night Live star, Pete Davidson back in 2016. The popular stand-up comedian exclusively confirmed his relationship with Cazzie taking to People in May of the year.

Their frequent photos on each other’s social media and an undeniable romance they had shared compelled many to think about whether the two are really made for each other.

However, the two didn’t last long and they broke up in May 2018. Shortly after their split, Cazzie headed to enjoy her vacation in Africa with wild animals.

While Davidson was in a relationship with Cazzie, the comedian revealed a tattoo of her face on his arm in a now-deleted Instagram post.

Pete removed the art he had inked on his inner forearm following their tragic breakup. Davidson then moved on with today’s biggest pop star, Ariana Grande. The two also got engaged in October 2018. But, they called off their engagement in October of that year.

David is a Cat Lover

The actress is the owner of a cute kitty. She has uploaded a series of beautiful photos of her pet feline on her Instagram.

What is Cazzie David Net Worth?

Her net worth stands at $300,000 in 2021. She predominantly makes money through her multiple works ranging from acting to writing to executive producing.

On the other hand, her daddy Larry David has a staggering net worth of $400 million. However, The National Review estimated his total fortune to a whopping $950 million.