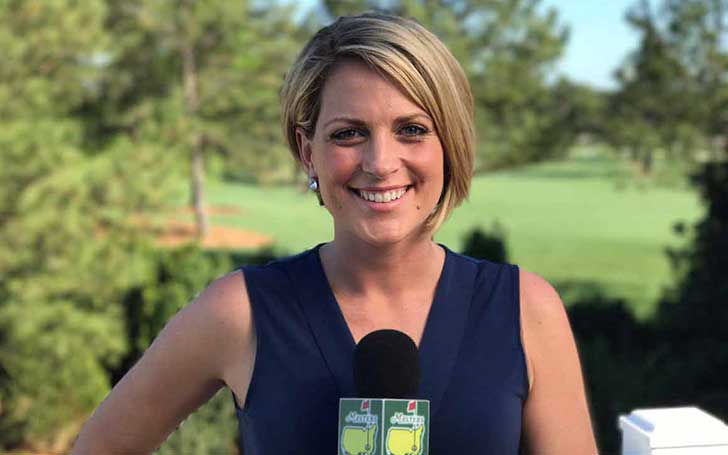 Jamie Yuccas is an American journalist and investigative reporter. She is most famously known as the CBS news correspondent. The Los Angeles-based CBS correspondent joined the network in August 2015 as a New York-based correspondent. Meanwhile, Jamie’s reporting has been featured across all CBS News platforms.

We have all the answers here. Stay with us.

Yuccas was born Jamie Ann Yuccas on August 3, 1982. She is aged 39 as of 2021. In case you don’t know, she was named after her grandfather James. She revealed the fact in one of her Facebook posts in August 2020.

She was born and raised in Minneapolis, Minnesota. Talking about her parents, she hasn’t talked much about it in the media. However, we know that her mother is Karen Yuccas and she shares a lot of photos with her mom on her Instagram. Her mother was married to her stepdad, Keith Pieper. Keith unfortunately passed away in 2016.

Meanwhile, info about her father is not available at the moment. Besides, Yuccas has one sibling, brother John Yuccas. Her brother John is a photographer who is an owner of John Yuccas Photography as well. John, who studied geography at the University of Waikato and University of Minnesota Duluth.

Besides, She also has a step-brother named Ben Pieper whom she referred to as a full-on brother in her heart.

Her Professional Endeavors-Highlights of her Career in Journalism

Jamie started her career in journalism in 2003 May when she started working as a weekend anchor and reporter for KTTC/KXLT-TV. There she anchored and produced weekend evening newscasts. Besides, she also worked as a primary fill-in anchor for main newscasts and a general assignment reporter.

After working there for over one year and six months, Jamie moved to WBBH in October 2004. She worked for the network for nearly seven years when she anchored newscasts, and vastly covered national disasters and political stories. One of her major news coverage was the Gulf Oil Spill.

Her Association with CBS Network

Jamie Yuccas’ journey with the CBS network started back in June 2011, when she worked on the CBS-owned network WCCO-TV in Minneapolis, Minnesota.

From 2011 to May 2013, she worked as a news anchor in Greater Minneapolis-St. Paul Area while from May 2013 to August 2015, worked in Minneapolis. Eventually, in September 2015, Jamie started working for the parent network i.e., CBS Network. She joined the New York-based network and at present, she works in Los Angeles.

Yuccas is still employed at the network where she does reporting, producing, and generating news content and feature stories for CBS. At CBS News, she has covered numerous major events such as Orlando’s Pulse nightclub shooting, 2016’s Rio Summer Olympics, and 2016’s presidential campaign.

Jamie is hugely successful in her journalism career and has even won two Emmys. She was working with the Minneapolis, Minnesota-based WCCO-TV when she grabbed the secluded award. WCOO-TV is the CBS-owned station where Jamie worked as a morning anchor and general assignment reporter.

Yuccas won her second Emmy Award in 2012 for coverage of Hurricanes Sandy.

Jamie’s current marital status is unmarried. However, she was previously married and divorced. She was married to her ex-husband John Sheehan. The pair reportedly got married in 2007 and finalized their divorce in 2017. As of yet, there’s no report of Jamie being a mother to a child.

While Sheehan hasn’t revealed much about her love life, she had previously gushed that she was going through a divorce during the Pulse nightclub shooting in June 2016. According to InStyle magazine, Jamie said covering bigger tragedy “often allows you to minimize your own troubles.”

She hinted that she was going through a divorce from her husband at the time. However, this pain was so petty compared to the pain the victims’ family members were going through. In her words,

“At the Pulse nightclub shooting, it was like, ‘How can I be upset that I am getting divorced? All of these people now don’t have their loved ones coming home.’ My stuff doesn’t matter.”

According to the reports, Yuccas’ ex-hubby John Sheehan is a regional business manager at “Starkey,” a hearing Aid Company.

Who is Her Ex-Husband, John Sheehan?

Jamie Yuccas’s ex-husband John Sheehan is a New York City sales representative for Starkey Hearing Technologies. According to his LinkedIn, he has been working in the organization for nearly 10 years. He joined the company back in September 2011 as a territory support manager in Eden Prairie, Minnesota.

In August 2015, he became the community manager and worked for nearly five months before he became a regional business manager in New York branch. Later, in November 2017, Sheehan started working as the account executive in the greater New York City area.

Jamie Yuccas Dating Someone Currently? Who is Her Boyfriend?

Looking at her social media posts, Jamie Yuccas doesn’t appear to be dating anyone currently. The CBS correspondent who shares almost everything about her life has been staying mum about her relationship for a long time now. In fact, Jamie used to share her romantic moments with her beau in the past, however, her social media posts show no sign of that.

Besides, Jamie was previously in a relationship with a pilot Bobby Maslar. While several online sites have mentioned their affair, it seems like she has deleted most of their photos. She would share a bunch of photos with her then-beau Bobby although she hasn’t talked much about it recently.

Here we have one snap that Jamie shared on her Facebook from her trip to Tahiti. Jamie wrote “Made it to TAHITI! #adventure #R&R #hotpilot ❤️” alongside the post. Have a look at the couple photo.

As per the reports, she and her now ex-boyfriend, Bobby went to Tahiti on a vacation in January 2018. She and Bobby reportedly met at a flight and then started dating shortly. Unfortunately, there isn’t much info about their relationships.

What is Jamie Yuccas Net Worth?

Jamie Yuccas has been working as a journalist for nearly two decades now. Besides, her association with the CBS News has spanned for nearly one decade, so she has obviously earned huge amount of money. Though her exact net worth is unavailable, we can safely say her net worth is in millions.