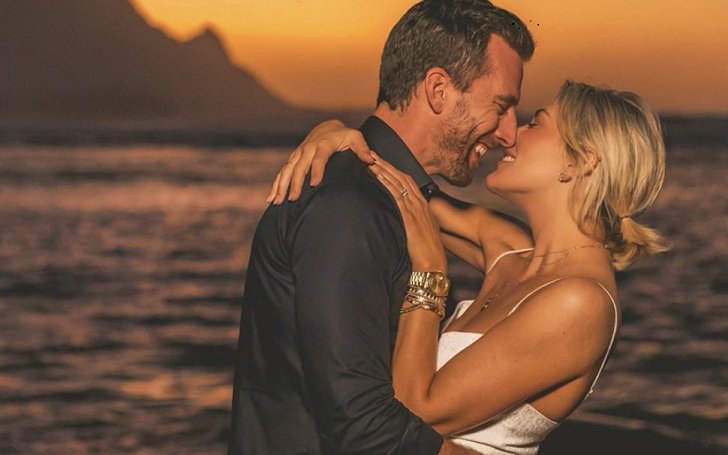 Charissa Thompson currently serves for Fox Sports, as both TV host and sportscaster. Recently, the beautiful journalist Thompson got engaged to Kyle Thousand in Jan 2020. So after getting betrothed, when are Charissa and Kyle planning to marry? And by the by’s, who is Charissa Thompson’s husband-to-be, Kyle? All of your queries are answered here today!

Besides, some tabloids also suggest that Charissa has had one marriage before. Is it true? Let’s trace out whether the journalist was ever in any kind of matrimonial relationship or not.

When will Charissa Thompson and fiance Kyle Thousand Marry?

Charissa and Kyle are definitely getting married but the two have remained tight-lipped about when and where they have decided to exchange the vows.

We can say, just like their engagement, which came all of a sudden, the couple is very likely to shock everyone with the news of their wedding. But given the current pandemic, safe to say, they aren’t going to tie the knot anytime soon.

The couple tied the knot back on December 30, 2020. Their wedding ceremony took place at Silverleaf Club, Scottsdale, in Scottsdale, Arizona. The veteran TV host announced the huge news with a lengthy Instagram post. Looking at her series of wedding photos, the two wed in a small wedding ceremony surrounded by their family members only.

Where did Charissa and Kyle’s Engagement Take Place?

The New Year 2020 was quite special for the television host Charissa Thompson. Why? Well, Thompson got engaged to her boyfriend of many years, Kyle Thousand on 2nd January.

Upon getting betrothed, the veteran TV personality divulged the big news after sharing photos from their romantic Island-style engagement. She also gave us a glimpse of her engagement ring as well in the same post.

Likewise, her beau also shared the same photo on his Instagram with the caption, ‘She said yes! Couldn’t be more happy to spend the rest of my life with you baby. I Love You so much.’

Charissa and Kyle got engaged at the Princeville Resort in Kauai, Hawaii. On 11th Jan, Kyle shared some more photos from their romantic getaway. One photo even showed her surprised reaction as her now fiance Kyle popped the question.

The journalist looked too happy after his proposal and they were also seen sharing a passionate kiss in the photos.

Thousand, 40, is a sports agent who currently serves as the head of the baseball division at Roc Nation Sports. The Creighton University School of Law graduate initially started out his career in legal departments.

Thousand once also worked as a lawyer for Chicago White Sox and Chicago Bulls. He currently resides in New York City.

Charissa Thompson was Previously Married, But Who Was Her Husband?

Charissa was married in the past but unfortunately, the identity of her ex-hubby is not known. The two tied the knot when Thompson was 25.

“I went to break up with him one night when we were going out. Well, I ended up walking out of that restaurant, drove to Hollywood, got a tattoo on my finger and got married that Saturday.”

It is yet to be revealed how their relationship ended in divorce. After the couple split, Charissa also removed a tattoo the TV host had etched.

Despite Differences, The Former Husband and Wives are Close Friends

The ex-couple is close mates as of now. She revealed it took a long time for them to get back to being friends. On 30th April 2016, Charissa shared a photo with her ex-hubby on Facebook with the caption,

“When your ex-husband helps you through sadness and makes you smile. He’s a hot mess & I appreciate him so much.. Ladies by the way he’s single! I’ll hook you up.”

It seems they are still too close and supportive of each other.

Charissa once called Ryan Bedford Her Husband: Were they married?

On Valentine’s Day 2017, Charissa posted a photo that confused a lot of her fans. In the photo, Charissa was with her ex-spouse and a speed skater, Ryan Bedford.

Interestingly, Thompson wrote on the image that both of them were her ex-husbands.

Here is the caption,

“Olan Mills Photoshoot. Ex Husbands and best guy friend.. and me not being able to take a normal picture”

However, after deep research, we found out that it was all just humor. In fact, Thompson and Bedford are close pals for years.

Charissa was once in a romantic relationship with ESPN analyst Jay Williams. Rumors about their affair emerged when a guy named Brendan Nelos tweeted they are dating on 3rd Feb 2013.

Initially, the two first met while they both were working at ESPN. She spent three years from 2010-13, working at the network.

According to Heavy, they apparently broke up back in late 2014.