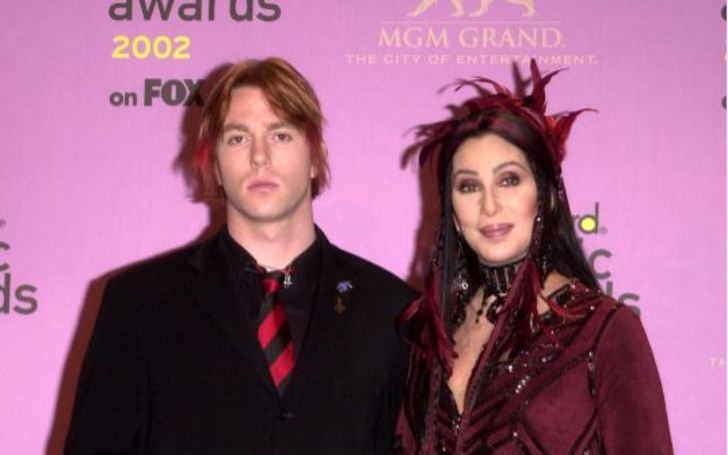 Elijah Blue Allman (professionally, P. Exeter Blue), is a musician, who is the lead vocalist, guitarist, and lyricist of the industrial metal/goth rock band Deadsy. Allman is better famous as the son of singer and actress Cher and her second/former husband, Gregg Allman.

Despite being the child of a landmark icon, Blue’s life was anything but easier. Although one could have died to have a mother like Cher, that wasn’t the case for Allman.

The songstress and her son became fodders for several tabloids throughout the life of the latter. Know all about those with reasons explaining why Cher couldn’t have a jovial relationship with her son. Also read about Elijah’s solo career as a lead vocalist of a metal band, his personal life, and much more.

Blue’s paternal grandfather was in the army during WWII.

Elijah’s famous mother, Cher (originally, Cherilyn Sarkisian) is an actress and television personality. Media often referred to her as the “Goddess of Pop.” She has achieved success in music, television, theater, and film in a career spanning six decades. Elijah’s mother, Cher’s song, I Got You Babe with her ex-husband, Sonny reached number one on charts in the U.S. and U.K. in 1965.

Sarkisian is also a famed actress with roles in hits like Moonstruck (best actress Oscar), Mask, Suspect, Mermaids, Silkwood, If These Walls Could Talk, Burlesque, Zookeeper, and Mamma Mia! Here We Go Again.

She is one of the world’s best-selling music artists with 100 million records sales. The mother of two has received a Grammy, an Emmy, an Academy Award, three Golden Globe Awards, the Billboard Icon Award, among others.

Elijah studied at a boarding school and several different institutions for the first ten years of his life.

And among his circle of friends growing up were the Kardashian sisters. Recalling the times when they were his school mate, Allman said the Kardashian sisters were always really close with everyone he knew. He said he would see Khloe the most because she was the one he was most friendly with and Kourtney, too as she was closer to his age.

Jared Leto and musician Fred Durst are also among his other high-profile friends who he met during his life as a rock star.

Cher’s son, Allman went to the Hyde School in Bath, Maine, graduating in 1994.

Around the year 1992, reports started to circulate saying that Blue, the son of Cher had turned transvestite. Reportedly, the then 16-year-old son of rock star Greg Allman stunned his mum by plunging into a drug-fuelled lifestyle of gay sex and cross-dressing. When in high school, he allegedly influenced other boys to wear lipstick and feminine clothing, studied the occult, and practiced satanic rituals. He also used to wear human bone jewelry and scared the younger students.

Allman is the half-brother of Chaz Bono. His mother had Bono with her former husband, Sonny Bono. Additionally, Elijah is also a half-brother to Delilah Allman, Michael Allman, Layla Allman, and Devon Allman; all from his father’s relationship with different women.

His Half-Sibling Is A Transgender

Allman’s half-brother, Chaz used to be a girl. Cher once admitted that she had initially reacted badly when her then-daughter Chastity had come out to her as a lesbian, then as transgender. The Grammy-winning mother, however, has since been happy with her daughter’s decision and has also been an advocate of the LGBT community.

Speaking about Chaz in Feb 2014, Elijah said the two were initially close, but then grew apart. He explained the two grew apart after going to different schools and just not being geographically around each other.”

He Started Doing Drugs At 11

While talking with ET, Cher’s second child Elijah revealed how he started buying drugs at such a young age.

The Californian lyricist said during his boarding school years, he would often come back home to visit his parents in New York. After that, he and his friends would go up to Harlem and get into all kinds of trouble.

Allman admitted he finds it shocking to think about himself at 11 years old buying drugs in Harlem.

The vocalist also explained he felt kind of shunned when his parents sent him to boarding at 7.

Allman got his first guitar from Kiss bassist Gene Simmons. When Allman was 13, he went on tour as a guitarist with his mother, Cher. In fact, Elijah appears as a guitarist in the music video for her song “If I Could Turn Back Time”.

In 1994, Deadsy’s singer auditioned for the spot of guitarist for Nine Inch Nails but lost the spot to Robin Finck.

As mentioned Cher’s son, Allman with Gregg is the singer and guitarist for the rock band Deadsy, an industrial rock/industrial metal band from Los Angeles, California.

Allman formed the band first recording a handful of demos (including “Flowing Glower”, “Dear” and a cover of Pavement’s “Texas Never Whispers”) with Alec Puro on drums and producer Josh Abraham.

He later sent an invitation to his friend from prep school Renn Hawkey (Dr. Nner) to join the band. The three members evolved their sound in the studio and sought out a record deal.

After that, Deadsy released two albums: 2002’s Commencement, and Phantasmagoria, which came out on August 22, 2006.

Elijah Blue Allman Is Married To An English Singer

Allman has been married to Marie-Angela “Angie” King of the band KING and sister of Jazzy and Ruby King from the British pop duo Blonde Electra since December 1, 2013. Elijah met Angie, a musician and opera singer in 2007 when he was having treatment for his Lyme disease in Germany — more down below.

They came upon each other on a blind date. After developing a relationship, the couple traveled Europe together – enjoying a private tour of the Louvre museum in Paris – before finally moving back to Los Angeles.

Elijah and Angie got married in front of the fireplace in their Beverly Hills house. The Gothic rock artist said the wedding had just a few friends of his, one of them being the rapper Mickey Avalon. Allman explained he and his wife wanted something that was sacred and private.

Angie is also signed to Elijah’s own record label Trankilo.

Elijah revealed he suggested to Angie that they get married after his rockstar mother failed to acknowledge or congratulate the couple. And it was also the reason why Cher didn’t receive an invitation to his wedding. As per the songstress’ son, Cher didn’t approve of their relationship.

Allman said he wasn’t going to wait for anyone’s approval and congratulations just like he’s never waited for any of that his whole life.

The Moonstruck star also didn’t invite the couple to Christmas at her Malibu home in 2013.

What Caused The Rift Between Cher And His Son, Elijah

Apparently, in early 2013, when Allman and Angie were just dating, they had briefly moved in with Cher under the same roof but things turned sower between mother and the couple. Also, the reason why Elijah and his wife left the house and got married to the singer was absent.

Additionally, when the trio was living together, Angie told how she and her would-be mother-in-law would work out together to Cher’s workout DVDs but would often clash.

Cher also did not reach out to congratulate her son and his girlfriend on their engagement.

Although Cher tried to save Allman from his father’s bad pattern, Elizah somehow ended up doing drugs.

Blue’s addiction to substances started as far back as his high school days.

Between 2005 and 2014, he nearly ended dead on a seedy street of Vancouver while intoxicated with substances, says Groubert, also an author and screenwriter.

In 2014, Elijah confessed to The ENQUIRER that his drug addiction was pretty much about an eight-year thing of really heavy use.

This toxic behavior led him to rehab and even years of estrangement from his mother. Cher, nonetheless supported her son even when they weren’t speaking. Elijah admitted he has always been the black sheep of his family and that he and his singer mother have had lots of ups and downs.

Elijah eventually became sober and subsequently became closer to his mother in 2013 albeit for a short period. The Academy mother of Allman then said she was grateful to have both her children in her life again.

He Reconciled With His Mother In 2020

In July 2020, Globe reported Elijah, his wife, and his superstar mother had buried the hatchet with the fashionista singer even welcoming back her son and daughter-in-law. Allegedly the three also spent the pandemic 2020 together. Reportedly it was Allman’s grandmother (Cher’s mother), Georgia Holt who served as a peacemaker.

Talking about one of those relationships, he once claimed he scrubbed his private parts with household bathroom cleaner Tilex after having sex with Hilton. He added he had nothing bad to say about any of those women.

Elijah Blue Allman Nearly Lost His Life To A Disease

While having a conversation with Et online, Deadsy’s lead man opened up about a near-fatal bout with Lyme disease that was eventually cured by doctors in Germany that he said was “so much darker” than even his heroin addiction.

He believes he contracted the disease from swimming in the Indian Ganges river in 2005. The case was so severe that when one ‘body cleanse’ went wrong he ended up in an intensive care unit for two weeks.

On the other hand, it was also the same time when he met his wife Angie.

Blue’s net worth is yet to be assessed, unlike his mother who has a massive fortune of around $350million. It’s clearly hard to say that he is anywhere near as rich as his multiple-chart-topping mother. Especially, considering his moderately talked about music, shows, and albums. Whatever the case, an astounding wealth is probably not in the possession of Allman as of this writing.

However, there’s a chance, although, slim, that the only child of Cher and Gregg is worth in the range of hundreds of thousands of dollars.

Equally important is the fact that he could very well be inheriting millions if the second time patch up with his wealthy mother goes well in the long run.

Also, he has, at times, been reported to have done property deals in million figures. As such, in April 2010, the lyricist listed his 1,455 square feet West Hollywood, CA house with a price tag of $1.1million.

Some Other Facts About Elijah Blue Allman