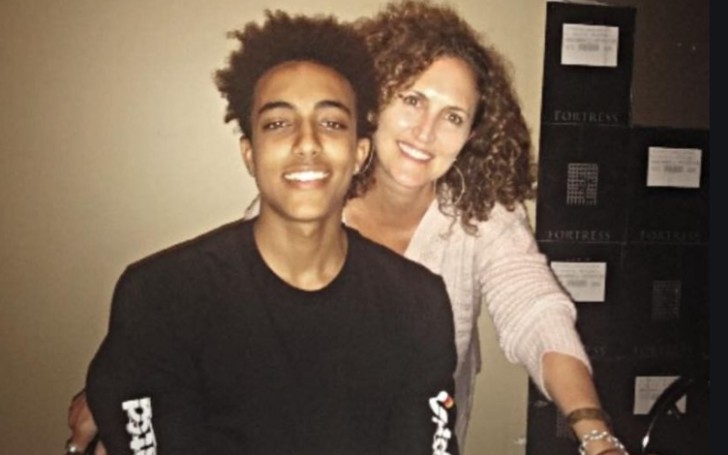 A high profile relationship with a big celeb will automatically make you famous. Similar is the case of Cheryl Bonacci. She is the former partner of a TV show host, Arsenio Hall. The exes are proud parents of one son, Arsenio Jr.

Not many people knew about Arsenio’s baby momma until a few years ago. Despite the revelation, there are many who still wants to know about Cheryl. Due to her secretive nature, not much is out there but that ends today.

We’ve found all the intricate details you should know about Cheryl. Let’s discuss more on her professional life and find out what is she up to these days. Also, know what type of relationship does she share with her former partner.

About Cheryl Bonacci: Her Age and Education

Cheryl is famous as the former girlfriend of talk show legend, Arsenio Hall. She first came into prominence after she became the mother of Arsenio’s one and only child. The celebrity mother has since kept her life behind closed doors.

Besides, Cheryl spent the major portion of her childhood in Arizona. Born on March 15th, 1965, in Arizona. She studied at the Chaparral High School in Scottsdale. Upon graduating in the year 1982, she joined the Mass Communication Program of Saint Mary’s College in Notre Dame, Indiana. She finished her Bachelor’s degree in 1986.

What is Cheryl Bonacci doing these days?

When it comes to her professional life, Cheryl is a multi-talented person. Not only does she works as a consultant for CLB Solutions, but she is also a member of the advisory board at the California State University Faculty. She is the Chief Operating Officer of Creative Acts. She has been a member of the board since 2016.

Previously, she worked as the Vice President, Production/Management for her husband’s company, Arsenio Hall Communications. After quitting Arsenio Hall, she started working as the Chaplain at the Office of Restorative Justice, LA. She also worked in the position of Program director in the same office.

In addition, she was a Member of the Advisory Board at InsideOUT Writers. Furthermore, she again joined the position of Program Director at A.R.C. The Anti-Recidivism Coalition.

As of 2022, she is the Board Member of the Jesuit Restorative Justice Initiative and Prison Arts Collective. Similarly, since January 2022, she has joined Civil Rights Corps as the Director of Storytelling.

Moreover, she also serves as the Director Of Communications for the National Institute For Criminal Justice Reform since March 2018.

Cheryl Bonacci’s was once in a relationship with Talk Show host, Arsenio Hall

It was around the 90s when Arsenio started a relationship with Cheryl. Back then, Arsenio had already left the TV scene because of which their relationship never came out in the public. Their love story only came to prominence after their son came into this world.

After their relationship came to an end, fans became curious if the former flames still share the same relationship or not. Well, at first, right after their break-up, they had an amicable relationship. Both of them even agreed on sharing the joint custody of their then-infant son. It is quite possible that both Cheryl and Arsenio still have the same level of respect for each other as before.

It wouldn’t be an understatement to say that it is their son who holds both of them together.

As we mentioned above, Bonacci is a proud mother of one handsome young man, Arsenio Hall Jr. She gave birth to her one and only child on 30th September 1999. At present, he is 22-years-old. At the moment, Arsenio Jr. studies at the Kelly School of Business at Indiana University. Previously, he attended the Chaminade College Preparatory School.

Besides, her son has turned out to be a fantastic young man. He is doing great education-wise and he is a vocal Black Lives Matter supporter. Going through his Instagram or Facebook account, we see a lot of posts regarding the recent Black Lives Matter movement. In fact, the star kid even attended the rally.

Both Arsenio Jr.’s mom and dad have a deep bond with him. While Arsenio Sr. even quit his career for the sake of his son, his mother took good care of him as well.

How much is Cheryl Bonacci’s net worth?

As of 2022, Cheryl’s net worth is around $200,000. She has earned a vast chunk of her income from her own career. In addition, when she was sharing the joint custody of her son her baby father Arsenio used to pay her a hefty monthly paycheck. Back in 2004, she even contested the spousal support after Arsenio Sr. stated that he should be giving child support on the basis of his current earning as opposed to his previous earnings.

Arsenio, when he was a big name in the talk show industry, used to earn an upward of $10 million a year. As of 2022, his total fortune remains at a resounding $16 million.