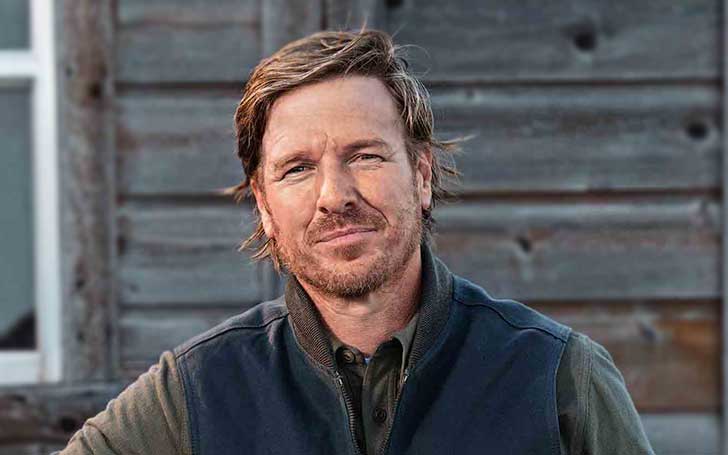 Chip Gaines is an American reality star and entrepreneur. Gaines is famously known for his appearance in the hit HGTV show Fixer Upper (2013-2018) alongside his wife, Joanna Gaines.

Gaines started his professional career in real estate after he met his wife Joanna in the early 2000s. The Gaines-duo flipped and fixed dozens of houses before they rose to the limelight as reality stars.

Gaines was born in Albuquerque, New Mexico in 1974. Details about his parents and family are yet to be revealed. Gaines has a sibling, a sister named Shannon Gaines.

Chip relocated to Colleyville, Texas with his family in 1982 at the age of eight. He spent most of his childhood days at his grandfather’s ranch in Texas.

Chip Gaines was in third grade when he moved to Texas. There he attended Grapevine High School for his primary education. Chip was fond of basketball during his school days, however, he left playing after he got busy with academics and work.

Later, he went to the Hankamer School of Business affiliated with Baylor University. Chip graduated in 1998 with a Marketing degree. During his first year in college, Gaines played baseball with the college team, however, he was dropped in sophomore year.

Chip Started His Business in College

Gaines started small businesses during his college days. Back then, he was known as a serial entrepreneur who had started a few small yet successful businesses like fireworks stand and prepaid laundry service, Green and Gold Wash and Fold.

Meanwhile, Joanna Gaines had started a home accessory store, Magnolia Homes. The husband-and-wife expanded the business after their marriage and started remodeling and fixing up homes.

The couple soon went on into real estate in full swing and renovated several houses across the US, specifically in Waco, Texas.

Chip and Joanna Gaines had spent around a decade in real estate business before HGTV approached them with a TV show called Fixer Upper. Fixer Upper is an American reality television series about home design and renovation. The series premiered on HGTV May 23, 2013.

Here is a short clip of their former TV show, Fixer Upper:

It successfully ran for five seasons until the husband-and-wife called off their show in 2017. Its last episode was aired on 3rd April 2018.

The former Fixer Upper star has not been linked with any other women other than his wife Joanna Gaines in his lifetime. The couple is married for more than one and a half-decade. As a matter of fact, Chip fell in love with Joanna even before they met in person.

Chip saw a photo of Joanna at her father’s automotive business shop in Waco, Texas in 2001. It was when Chip thought that she was the girl for him.

On another day, Chip went to the shop to get his car’s brake fixed where Joanna was working in the office. It was the first time they met. Joanna was quickly mesmerized by Chip’s personality.

The pair spent weeks before they went for their second date. After that, they got serious and started spending lots of quality time together.

After around a year they became engaged. Chip got down to one knee and proposed Joanna at a shopping center close to his parents’ hometown. He later took to a jewelry shop so that Joanna could pick an engagement ring for her.

On May 31, 2003 Chip and Joanna Gaines got married in the Earle Harrison House in Waco.

Shortly after their nuptials, Chip and Joanna went to New York for their honeymoon where they stayed at Drake Hotel.

Chip and Joanna Gaines Share Five Children-What are Their Names?

Chip and Joanna Gaines have given birth to five children. They welcomed their first child, a son Drake Gaines (16) on May 4, 2004, nearly a year after their wedding. They gave birth to their second kid, a daughter, Ella Rose Gaines, 13, on October 23, 2006.

More than eight years after the birth of their fourth child, Chip and Joanna Gaines gave birth to their fifth child, a son Crew Gaines on June 23, 2018.

What is Chip Gaines’s Net Worth?

According to Celebrity Net Worth, Chip Gaines has an estimated net worth of $10 million in 2020. Meanwhile, Chip and his spouse Joanna have a combined net worth of $20 million.