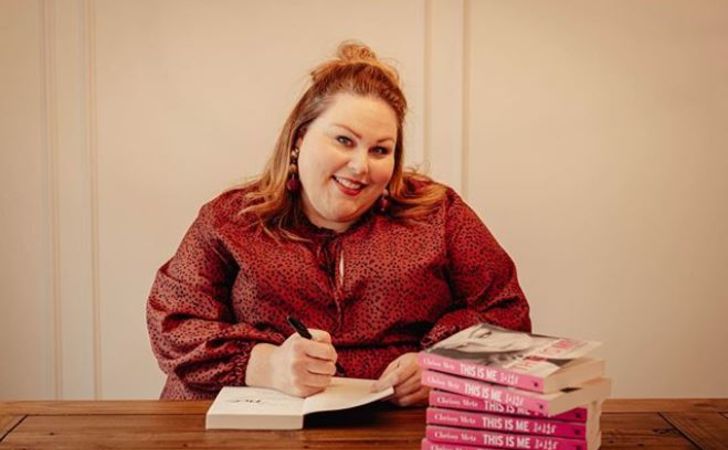 Chrissy Metz has been an inspiration to many women across the world who thought that their weight issues and huge body structure can stop them to be a star in the entertainment world. The plus-sized actress currently plays Kate Pearson, wife of Toby Damon (played by Chris Sullivan) in the smash-hit TV series This Is Us.

Besides, she was once also married in real life. But what is her relationship status at present? Just in case she is married, who is Chrissy Metz’s husband? Also, we will talk about her past affair and relationship.

Here is everything you need to know about her love life.

Chrissy Metz tied the knot with Martyn Eaden, a British freelance screenwriter on 5th Jan 2008. The two exchanged their vows in a very small ceremony in Santa Barbara, California. Apparently, they weren’t financially strong which was the reason both of their families couldn’t attend their wedding.

The same year, Metz played Chunk, a cheerleader on the TV series My Name Is Earl. And then the actress purchased two tickets to visit her family in Florida with her husband Eade.

Chrissy wrote in her 2018 memoir This Is Me: Loving The Person You Are Today that her hubby is an introvert and reserved.

Chrissy met her then future-husband Martyn after joining an online dating site in 2006. They subsequently exchanged emails for months. At the time, Eaden resided in Sheffield, South Yorkshire while Metz lived in Los Angeles.

Despite the huge distance between the two, her then-boyfriend Martyn visited her in Los Angeles after a few months of their meeting. While Eaden often visited her in the United States, Metz wasn’t too excited to travel to the United Kingdom.

The couple dated for a year before they got engaged.

Metz and Eaden divorced in 2014: How did it all happen?

While the relationship was ruined over the years, non of the two ever confronted the problems finally ending in a divorce. All this while, Chrissy kept herself busy going to Overeating Anonymous meetings. At that same time, her husband Eaden also started hiking with his female co-worker.

The couple finally decided to separate upon a visit from his parents in 2013. When Metz asked her husband about his plan to lead a matrimonial relationship with her.

Chrissy recalled what he said, “Everything is about you. Chrissy, you are as narcissistic as you are selfish. From the beginning, everything has been about you.”

The actress commented on his saying, “felt like a slap”, but she wanted to separate amicably. The couple’s divorce was finalized in 2014. They are still good friends. Metz told,

We’re just not the right fit. But I love him, and I’m always checking in on him. I am still working on being a better ex-wife than I was a wife

Talking to People, Chrissy further opened up about her marriage with Metz and the lessons she learned from the relationship.

It’s a compromise in any relationship, but that doesn’t mean you have to change who you are. Just because we got married doesn’t mean that we have to miserable trying to fix it.

There would be times where I didn’t want to make him dinner because I was afraid he wouldn’t like it and I would disappoint him. That is banana pants. I denied the action of who I am because my ego was so afraid of being bruised.

Following their divorce, Metz was involved in a few other relationships.

Chrissy Metz became an international star following her performance on the NBC hit series This Is Us. She portrays Kate Pearson, Toby Damon’s wife in the series (portrayed by Chris Sullivan).

The reel couple also has a son named Jack Damon. But they are just good colleagues in real life.

Metz and Stancil met on the set of the popular NBC series which aired on 20th September 2016. She went on to disclose that she was dating a new boyfriend at KIIS FM’s Jingle Ball 2016 in December of the year. She said, “He’s not an actor, but he is a sweet treat and he’s wonderful.”

The actress didn’t reveal who was her boyfriend at the time. But, it became clear when Metz began seeing her then-mysterious boyfriend Josh shortly after that.

They dated over a year before Chrissy confirmed her break up with him in March 2018.

Chrissy Metz was dating her composer boyfriend, Hal Rosenfeld. As per sources, the two began dating in late-2018. The couple made their first red carpet appearance at the 2019 Golden Globe Awards, in Beverly Hills in January.

Initially, the two made several joint appearances but suddenly they stopped appearing in public. Then back in June 2019, the actress shared a lengthy emotional post on Instagram. The post sparked speculation that the two might’ve possibly broken up.

And yes they did broke-up. In August of 2020, PageSix confirmed Hal and Metz have broken up after a source told them that Chrissy is back on the market.

As per the reports, Chrissy is dating her boyfriend Bradley Collins in 2022. The duo reportedly began dating in May 2020 and are together ever since. They made their relationship official on National Boyfriend Day on October 3, 2020, when she posted a beautiful photo of them together.

Moreover, the two were also rumored to have engaged after Metz was spotted wearing a ring. However, Chrissy denied the allegation saying,

Let’s be very clear. Let me — can I show you guys the ring? This is the ring that he bought me for Christmas