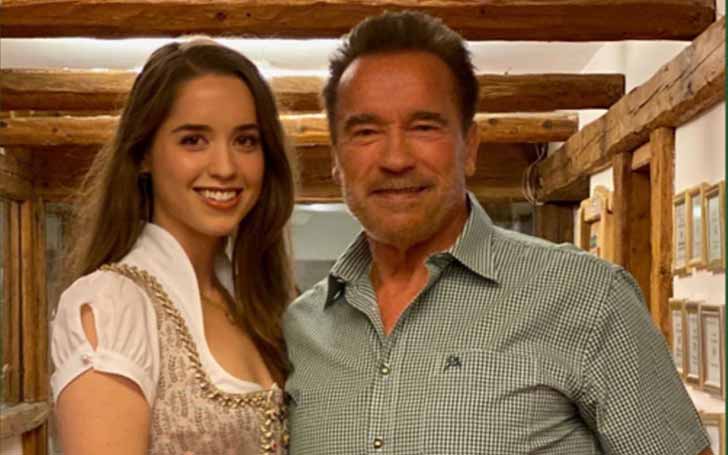 Christina Schwarzenegger is the daughter of a famous Austrian-American actor, producer, businessman, retired bodybuilder, Arnold Schwarzenegger. She is the second child born to Arnold and his ex-wife, Maria Shriver. Besides, Christina is a producer, famous for producing Take Your Pills, The Doctors, and Access Hollywood.

Despite being the child of renowned actor and political figure, Arnold, not much about Christina is revealed in the media. In fact, Christina has kept her personal life that includes her love life, and relationships under the media radar.

So in today’s article, we are covering every aspect of Christina Schwarzenegger’s life.

Christina is an American by nationality and belongs to mixed ethnicity. Her father, Arnold has a central-European lineage as his grandparents were from Czech, and Christina’s mother, Maria has mostly Irish and German descent.

Talking about Christina’s education, she completed her graduation from Georgetown University in Washington D.C. in 2013.

Christina has a half-brother, Joseph Baena from her father’s relationship with Mildred Patricia Baena. Joseph was born on October 2, 1997, and is 23 years old as of September 2021.

As a matter of fact, Arnold had fathered a son, Joseph 14 years before it came to the public. Arnold was expecting a son with one of their household employees, Mildred while he was expecting his fourth child with his then-wife, Maria. Meanwhile, Arnold revealed he himself was unaware of Joseph for years.

Her Parents’ Were Married For 25 Years – Reason for Their Divorce

Christina’s parents Arnold and Maria were married for over 25 years before they finalized their divorce in 2011. The former duo tied the knot on April 26, 1986, in Hyannis, Massachusetts. Rev. John Baptist Riordan officiated their wedding at St. Francis Xavier Catholic Church.

As we mentioned before, the husband-and-wife lived a happily married life for over two decades and gave birth to four children. However, coming to the early 2010s, Maria came to know that Arnold had cheated on her in the past. Not only that but it was also revealed that Arnold fathered a child with a house worker at the time Maria gave birth to her fourth child with Schwarzenegger.

With the revelation, Arnold and Maria’s married life hit the rock and it ultimately ended in a divorce. As per the record, Arnold Schwarzenegger and Maria Shriver officially divorced on May 9, 2011.

Christina Schwarzenegger Has a Strong Connection to Politics

Besides being a renowned actor and former bodybuilder, Christina’s father, Arnold Schwarzenegger is also a renowned political figure. Arnold is a registered republic for several years. As a matter of fact, Arnold served as the 38th governor of California from 2003 to 2011. He was elected as the governor on October 7, 2003.

Meanwhile, Christina Schwarzenegger also has a big political connection from her maternal side. Her mother, Shriver is the niece of the late U.S. President John F. Kennedy and Senator Ted Kennedy.

Her Struggle with Adderall Addiction

Christina Schwarzenegger dealt with attention deficit disorder aka ADHD as a child. She started taking medication i.e., Adderall for the disorder in her freshman year in high school. By the time she reached college, the star kid started becoming addict to it.

Christina, who attended Georgetown University said that her addiction to Adderall started because of the stress associated with attending an “academically rigorous” college. She has successfully gotten out of the addiction as of now and she warns that Adderall does more harm than good if not managed properly.

Christina Schwarzenegger Partnered with Her Mom for a Netflix Documentary

Back in 2018, Christina grabbed the opportunity to work with her mother for the Netflix documentary. The 30-year-old filmmaker was more than happy to produce a documentary titled Take Your Pills. The film showed the usage of Adderall in American society and its good and bad impact on physical and mental health.

“I think everybody in this country is feeling pressure [to feel successful]. We’re living in a 24-hour news cycle… people are addicted to their technological devices. So I think people are pressured to achieve the American dream. They feel shamed if they don’t.”

Christina also talked about how harmful it can be if not taken properly. She said,

“You get a high from it. But in a completely different arena, it’s very helpful obviously for people to have ADD, who struggle with their attention span. It’s a very helpful drug for those types of people.”

In the meantime, the mother-daughter duo noted that they were not against Adderall and they hoped the film serves more of a precaution of its harmful consequences.

The 30-year-old filmmaker and star kid has not revealed much about her career interest. However, she has produced a documentary and has appeared in a couple of TV shows. As mentioned earlier, she produced Take Your Pills in 2018. In order to promote the film, Schwarzenegger made her appearances on a couple of TV shows.

Besides, according to IMDb, Christina has appeared on some TV series as well. As per the record, she appeared as herself in the 2008 series, The Doctors. Likewise, she had previously made her appearance in the television series, Access Hollywood.

Her Love Life – Who is Christina Schwarzenegger Dating?

Christina is a notoriously private person. She has never been open about her personal life, relationships, and boyfriends with the public. The 30-year-old is not active on Instagram and Facebook which further helps her keep herself away from the media limelight. Schwarzenegger is a presence on Twitter, however, she doesn’t share her private life on the platform.

Since she has already in her 30s, we can safely say she has dated at least one man. But, the details are still far from our reach.

Christina has executive produced a documentary and has appeared on a couple of TV shows. We presume she earned a good sum of money from her work. But, her exact earning and net worth are not known at present. But, Schwarzenegger is worth millions as of 2021. In fact, Variety reported that Christina bought a $2.8 million home in Brentwood, Los Angeles, California. The house sits on a 3,200 square feet area and features 4 bedrooms and 4.5 bathrooms.

On the other hand, Christina’s parents have done well in their respective professions and have earned a whopping net worth. Her father, Arnold Schwarzenegger has an estimated net worth of $400 million in 2021.

As per reports, Arnold used to earn $20-30 million per movie at the peak of his career. Similarly, her mother, Maria Shriver has an astounding net worth of  $200 million. Maria herself has earned well from her profession as a journalist, and author, but she also received a huge chunk of money as part of her divorce settlement with Arnold Schwarzenegger.