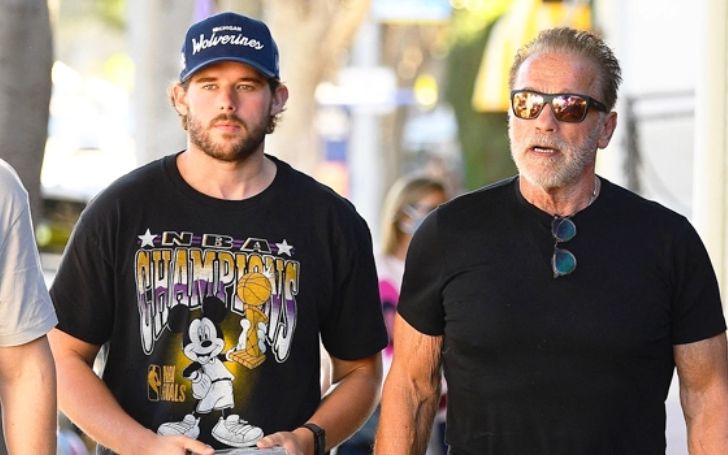 Christopher Schwarzenegger is best known for being the son of Arnold Schwarzenegger. His father is a famous actor, businessman, and former professional bodybuilder. Similarly, his mother Maria Shriver is an American journalist and author.

Despite being born into a family of celebrities, the star kid is very private regarding his personal life. Thus, very little about Arnold’s youngest son is known in the media. However, lately, Christopher is in the media for his incredible weight loss, where he shared before and after pics on his brother Patrick’s 29th birthday.

Besides, there has been a lot of curiosity surrounding his career, age, love affair, relationship with his parents, and much more. Well, in this article, we are going to reveal everything you have always wanted to know about Arnold Schwarzenegger’s son Christopher Schwarzenegger.

He was born on September 27, 1997, in California, the United States to father Arnold Schwarzenegger and mother Maria Shriver. Talking about his age, he is 24 years old as of 2022. Christopher will be celebrating his upcoming 25th birthday on the 27th of September this year. Likewise, his zodiac sign is Libra.

Further, he has a mixed ethnical background where his mother is a mix of German and Irish ancestry and his father is a mix of Austrian and Czech ancestry. He is an American as per his nationality.

He Has Good Educational Background

Just like his older brother, Christopher completed his high school at Brentwood High School. He later joined the University of Michigan and graduated in May 2020. His father shared a post on his Instagram account to show his love and appreciation for his son which quoted,

“Christopher, you are a champion and I love you. I know your graduation from Michigan wasn’t the big celebration you dreamed about for years, but walking across a stage isn’t what makes me so proud of you: it’s your compassion, your hard work, your vision, your critical thinking, and your selflessness that make me burst with pride.”

The brilliant actor also said he can’t wait to see him reach new heights and achieve more in life.

At the age of 13, in 2011, Christopher suffered a life-threatening injury. Reportedly the former first lady’s son was boogie-boarding, unfortunately, some things didn’t go as planned and he suffered multiple fractures including broken ribs and punctured lungs. He was out on the beach and was immediately rushed to the Los Angeles area hospital where he was treated in the ICU.

Many of the fans were praying for him to get well soon and were also curious to know about his current condition. So, to provide an update on his situation, and to thank all of the personnel, his parents provided a statement saying,

“A few days ago our son Christopher suffered an accident at the beach. While it has been a very scary week, Christopher is surrounded by his family and friends. He is a brave boy and is expected to make a full recovery.”

“On behalf of our entire family, we want to sincerely thank the paramedics and lifeguards who responded so swiftly as well as the doctors, nurses, emergency room and hospital staff who have cared for our son. They have been extraordinary to him and us. We thank everyone for their thoughts and prayers and ask for respect and privacy for Christopher and our family.”

Similarly, his brother and eldest sister also thanked their well-wishers and assured them that he is making a speedy recovery.

His Siblings Are Doing well in Their Respective Career

Christopher is the youngest child born to Arnold and his wife Maria Shriver. He has two elder sisters and an older brother. Similarly, he also has a younger half-brother from his father’s affair with their housekeeper.

His elder sister Katherine Schwarzenegger Pratt was born on 13 December 1989. She graduated from the University of Southern California and is an author and an ambassador of the American Society for the Prevention of Cruelty.

Similarly, his sister Christina Schwarzenegger was born on 23 July 1991. She is an author, blogger, and activist. Likewise, she is also an aspiring actress, producer, and social media influencer. Christina has starred in many series including The Doctor, Access Hollywood, and a Netflix documentary series Take Your Pills.

Further his brother Patrick was born Patrick Arnold Shriver Schwarzenegger on September 18, 1993. He completed his high school at Brentwood High School and got a degree in Cinematic Arts from the University of South California. Patrick is a rising actor and model. He first appeared on television in the movie The Benchwarmers. Apart from that he also has his clothing line and has been signed to LA Models.

Christopher’s younger half-brother Joseph Baena was born on October 2, 1997. He completed his Bachelor’s degree in Business Administration from Pepperdine University. He is also an actor, a real estate agent, and a bodybuilder.

Christopher Schwarzenegger Weight Loss Journey: How Did He Change His Way of Life

The youngest son of Maria was Obese for most of his life. He wasn’t like his father and brothers who trained and followed a strict diet to remain fit and healthy. Instead, Christopher loved eating junk food and gained a lot of weight throughout the years. Many of his fans and well-wishers were also quite worried about his health.

However, moving to the present, fans are shocked to see the drastic weight loss of Arnold’s son. While shirtless, he was first spotted in Los Angeles on October 14, 2021. He displayed his trimmed-down body. It has surprised people and they want to know the reason behind his transformation.

According to his mother, he wanted to get into shape for his graduation and made it his goal to get healthier. Similarly, when asked about his motivation, a close source told the daily mail,

“He started working out and making better food choices. He was away at school living like a typical college kid for a few years, but he’s growing up now and ready to take better care of himself.”

Further, the insider also explained that Christopher lost his weight in an old way by avoiding junk food and training hard in the gym but not with a fad or crash diet.

As of 2022, the star kid has dropped a considerable amount of weight and his father and brother are pretty impressed with him. Showing his appreciation through his Instagram Arnold said,

Similarly, his brother Patrick said he is proud of him and can’t wait to see what this year brings. Further, he also appeared at his brother’s 29th birthday on September 18, at Nobu Malibu, where he looked incredibly fit and healthy.

Does Christopher Schwarzenegger have a Girlfriend? His Relationship Status

He is a very private person when it comes to talking about his personal life. He hasn’t shared any details of his love life. However, many tabloids confirmed that the 25-year-old used to date a girl from his high school. But as of 2022, he is single and does not have any girlfriends.

Christopher isn’t dating anyone right now and the university graduate is currently focused on his career. We hope him the best of luck in his future endeavors and also wish to find out who will Arnold’s son be dating shortly.

Christopher’s Father Had an Affair with the Housekeeper

The former governor of California had an illegitimate relationship with his housekeeper Mildred Patricia Baena. Whenever his mother went to work, according to different sources, Mildred would wear her belongings and jump into bed with him.

She even gave birth to a child a couple of days after Christopher was born. The child began to look more like Arnold rather than Rogelio Patricia’s ex-husband at the time. It made everyone in the household suspicious of the relationship. Later, Arnold and the housekeeper opened up about their relationship to everyone’s shock.

His Mother Filed For Divorce After Knowing about the Extramarital Affair

After the incident, Christopher’s mother filed for divorce with seven times Mr. Olympia on July 2011. However, the divorce was finalized 10 years later on December 28, 2021. She wished for joint custody, spousal support, & payment for her attorney.

Christopher’s Dad is an Actor and Businessman

Arnold Schwarzenegger is a very well-known actor, businessman, and former bodybuilder. He started his career as a bodybuilder lifting weights at the tender age of 14. He was determined to reach new heights and became Mr. Universe at the age of 20.

Similarly, he is also a seven times Mr. Olympia title winner. He has gained a lot of name and fame from his bodybuilding career and to commemorate his achievements a competition by his name Arnold Classic has been held from 1989 to the present.

Apart from his career as a bodybuilder, Arnold is also known for being an action hero. He has starred in many movies including Hercules in New York and Conan the Barbarian. However, he is best known for his role in The Terminator and Predator.

What Is Christopher’s Net Worth?

The celebrity son hasn’t shared any career details, however, many tabloids have estimated his net worth to be around $500,000.

On the other hand, his father Arnold Schwarzenegger is estimated to have a total fortune of $450 million. He has accumulated wealth from his career as an actor, businessman, and former bodybuilder.