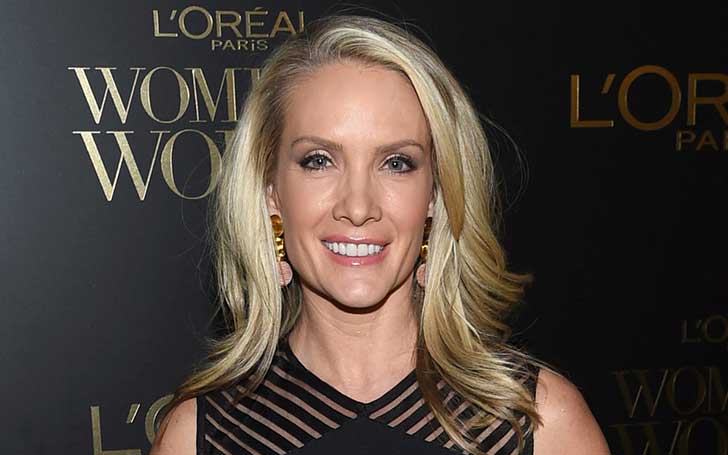 Dana Perino currently hosts The Daily Briefing with Dana Perino on Fox News which she started in October 2017. Apart from this show, she also co-hosts The Five.

Born in Wyoming, Perino grew up in Denver, Colorado. Perino is the oldest of three children of mother Janice “Jan” Perino and father Leo Perino. She has a younger brother and a younger sister, Angie Perino.

Perino belongs to a mixed ethnic heritage. Her paternal great-grandparents were Italian immigrants.

Perino completed her high school at Ponderosa High School in Parker, Denver. After that, she enrolled at Colorado State University-Pueblo. She majored in mass communications and minored in political science and Spanish. Perino obtained a Master’s degree in public affairs.

What is Dana Perino Age?

Later, she worked as a staff assistant to Congressman Scott McInnis. Subsequently, she served as the press secretary for Rep. Dan Schafer for about four years.

In 1998, Perino took a hiatus from her career and moved to Great Britain with her husband, Peter McMahon. Three years later, she returned to the United States and started working as a spokesperson for the Department of Justice.

Dana then started her journey in the White House as the associate director of communications for the WH Council on Environmental Quality.

On 31st August 2007, President Bush announced Perino as Snow’s replacement after Tony decided to resign his post due to health issues. She served as the Chief Press Secretary of the White House until Barack Obama succeeded Bush as the president.

Her Work after She Left White House

In 2009, Fox News hired Dana as a political commentator. In 2011, she started hosting the talk show The Five alongside co-host Greg Gutfeld, Jesse Watters, and Juan Williams.

Since September 2016, Perino hosts the podcast Perino & Stirewalt: I’ll Tell You What with co-host Chris Stirewalt.

Dana Perino Salary and Net Worth

As of 2020, Dana Perino has a decent net worth of $6 million. According to The Richest, she received an annual salary of $172,000 for her job as a press secretary. She served as a White House press secretary for two years from 2007.

Perino hosts the television show The Five since 2011. As per the records, Perino receives an annual salary of around $250k for the show.

Former White House press secretary, Dana Perino is married to English businessman Peter McMahon since 1998. They tied the knot within a year since their first meeting in 1997.

Dana and Peter exchanged their vows in an intimate wedding in Peter’s native England. Following the nuptials, the newlyweds headed to Santorini, an island in the Aegean Sea near Greece.

Perino and Peter Met in a Flight in 1997

Dana Perino and Peter McMahon have lived more than two decades together, however, very few know their first meeting was just a coincidence. Back in 1997, Dana and Peter happened to sit next to each other during their flight from Denver to Chicago.

Even though Peter was happy to find Perino seated next to him, he didn’t approach her; rather he kept on reading a book, “The Tailor of Panama.” Perino started the conversation by saying a friend of hers also read the book.

After that, they carried on their conversation until they touched down in Chicago. They exchanged their business cards before leaving the airport.

Around one and a half months later, Peter went to Washington on a business trip. There he met with Perino in Georgetown and they started dating shortly later.

Dana Perino Revealed the Secret of Their Happy Married Life

Even though Dana Perino and Peter have an immense age difference of 18 years, they are no less than the contemporaries. Perino wrote an article on Fox News in September 2018, in which she described her life with her husband Peter.

She said the secret ingredient of their two-decade-long relationship has been the faith they have towards each other. Moreover, she added “Gratitude. Grace. Commitment. Love. Surrender” are other things that have kept them happy as husband-and-wife.

The husband and wife of 22-years don’t have any children together. The couple, however, has two pet dogs, Jasper, and Henry.

On the other hand, Perino is not known to have dated anyone publicly before she found Peter.

Who Is Dana Perino Husband? All About Their Marital Relationship

Amanda Balionis Is Engaged: Some Interesting Facts About Her