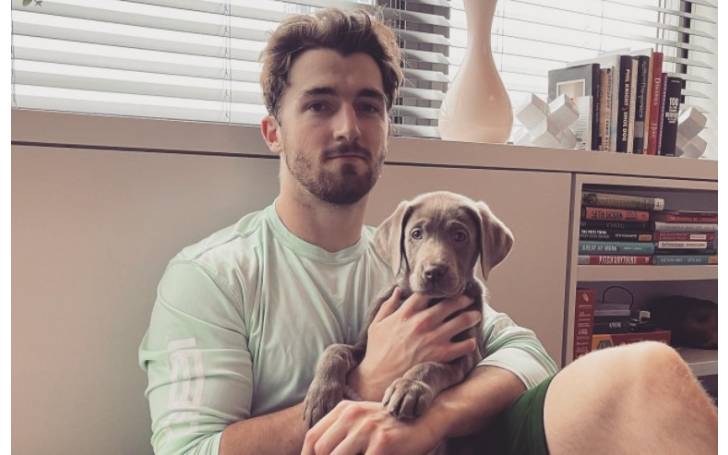 Daniel Neeson is an American star kid who is famous as an Irish actor, Liam Neeson’s son. His father is an Award-winning actor famous for his work in Schindler’s List, Taken, and many others.

As a star kid, people are bound to be curious about your life and ask questions like what is Liam’s son Daniel doing? Is he an actor just like his dad or has ventured into something else?

Well, let’s find out here in this article. We will discuss Daniel’s profession, relationship status, education, and more!

Daniel Neeson is the son of Liam Neeson and Natasha Richardson

Daniel Barry Neeson was born on August 27th, 1996, in New York, NY. Though his mom and dad are from England and Ireland respectively, his father’s career saw them settle down in the United States.

Talking about his ancestry, Daniel is of Irish-English descent. His father Liam is an Ireland native while his late mother Natasha was an English actress so safe to say, Daniel is eligible for both British and American nationality.

His mom died in a horrible ski accident

On March 18th, 2009, Daniel’s mother, unfortunately, passed away after a tragic ski accident. Two days before the incident, on 16th March, she was taking ski classes when she fell and sustained a head injury.

At first, she got up fine after falling and even said she didn’t want any medical attention. Then two hours later she complained of a serious headache. She was then immediately flown to Lenox Hill Hospital in NY where she was pronounced dead after two days.

He has one older sibling who is an actor

Daniel is the youngest child of his parents. Before him, they welcomed Micheál Richard Antonio Richardson, born on June 22nd, 1995. He was born in Dublin, Ireland.

His older brother Michael is an actor who made his mark in the industry with his role in Anchorman 2: The Legend Continues. His other famous credits include Vox Lux, Cold Pursuit, and Big Dogs.

Where did Daniel Neeson graduate from?

For his high school, he studied at Fordham Preparatory School, in Bronx, New York. After finishing high school, he enrolled at Tulane University in New Orleans. It is the same college where the late Steve Jobs’s daughter, Erin Siena Jobs studied.

Besides, Daniel studied Theatre and Digital media for his Bachelor’s degree. On his graduation day, his family members were all there to bless him including his dad and grandmother.

Looking at Liam, it wouldn’t be an understatement to say he felt like a proud father that day.

He is the son of two award-winning actors

Daniel’s dad Liam’s name is renowned throughout the world. Beginning his career back in the late 70s, Liam instantly became a huge star after he starred in the 1981 movie, Excalibur alongside his former partner, Helen Mirren.

After working in the industry for a decade or so, Liam starred in his career-defining role in Steven Speilberg’s 1993 Oscar-winning movie, Schindler’s List. As of now, Liam has multiple awards in his holster along with all the love he gets from fans around the world.

Now talking about his mother, Natasha, well, she was a great actor as well. A member of the Redgrave family, she started out her career in small roles and eventually worked in award-winning movies including The Handmaid’s Tale, Nell, and The Parent Trap.

Is Daniel Neeson an actor just like his parents?

We’re sure this question is definitely asked quite a lot all around the internet. After all, Daniel’s parents and even maternal grandparents have been a big part of the entertainment industry.

Now going by his current activity, it seems Daniel is not really interested in acting or anything related to the entertainment industry. Moreover, Daniel is yet to make his debut as an actor.

What is Daniel Neeson doing? He is a Businessman

Well, Daniel might not be an actor, but he is sure as hell enjoying his profession. He is a businessman who has founded two start-ups. His first business was a clothing line-up named, Pine Outfitters. The company is all about creating state-of-the-art fashionable clothing by using eco-friendly materials.

He founded the company alongside his two friends, Billy Renza and Adam Millman. Before that, the trio formed an electronic music band, ‘Recess Club.’

In addition to his work in Pine Outfitters, Daniel is also the co-founder at De-Nada Tequila. He founded the company alongside Adam Millman back in 2018.

Is Daniel Neeson dating? Who is his girlfriend?

Yes, Daniel is currently in a relationship. He is dating a girl who goes by the name Natalie Ackerman. Although Daniel rarely ever talks about his personal life, they first started pictures of them together in 2017. Safe to say, the pair must’ve started going out around the time.

Since then, Natalie makes a regular appearance on Daniel’s Instagram account. The lovebirds hang out quite often in social settings. Going by how intimate they look with each other, it is fair to say they are in it for the long haul.

The twosome isn’t engaged as of yet, however, it wouldn’t be long before Daniel gets down on his knees. Here’s hoping the day comes sooner rather than later.

How much is Daniel Neeson’s net worth?

As a star kid, you get to have all the luxury in the world. From going to fancy places to experiencing everything the world has to offer, there is no shortage of experiences for you.

Likewise, both of Daniel’s mom and dad are big stars who had earned a huge amount of money through their work. While Liam is currently worth $145 million, the late Natasha Richardson had a total fortune of $15 million.