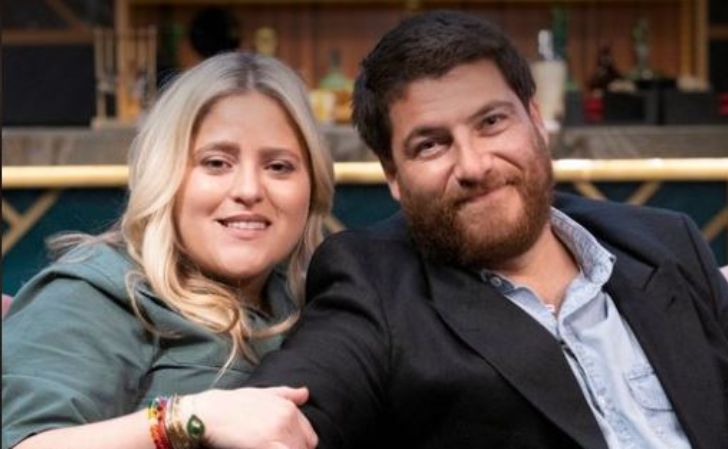 Daniella Liben is a former boutique store owner from New Jersey. She is better known as the wife of the Happy Endings and The Mindy Project actor, Adam Pally. Liben and Pally allegedly have been together since high school. And their union evidently has lasted for more than two decades. The couple is also parents to three children.

Daniella’s husband, Pally, in addition to the screen, has done a lot of work in improv and sketch comedy shows. Adam is a member of a sketch comedy group called Chubby Skinny Kids as well as the improv group Hot Sauce.

While the father of Liben’s children is also famous through movies including Iron Man 3, Assassination of a High School President, Taking Woodstock, and Slow Learners, Daniella herself is a complete stranger to the media world. Learn in detail about her in the following headings; how she came to be Adam’s wife, her parental links, her origin, and further.

The Jewish wife of the Search Party actor, Daniella Liben was born, Daniella Anne Liben in 1981 presumably in June. The now 41 years old is the daughter of Sindy Liben and Barry Liben of Livingston, N.J.

Her mother, Sindy reportedly is a registered nurse who during the late 2000s worked with Daniella’s in-laws at their medical office in Florham Park, N.J. Likewise, her father Barry was the president of the Tzell Travel Group, a travel agency in New York.

Liben’s father-in-law, Dr. Steven Pally was an osteopathic internist during her and Adam’s marriage.

Liben graduated from the School of Visual Arts in New York.

Liben’s late father, Barry who died in Jan 2020 was reportedly a savvy businessman who was fair, demanding, loyal and intelligent.

He is known for having a significant contribution to Travel Leaders Group which under his guidance acquired companies such as Protravel International, Vacation.com, and Nexion.

Daniella’s father, Barry was born in Brooklyn, N.Y., in 1952. When he was 15, his parents moved away, but he decided to stay. The New Yorker dropped out of school and took three jobs to keep his family apartment.

He eventually would run a sleepaway camp organized by the Jewish organization Betar that he had attended as a child. It was there he met Danielle’s mother and his wife, Sindy Bachner. The Liben-Bachner couple would eventually have three children including Adam’s wife and seven grandchildren.

Adam Pally’s Wife, Daniella Used To Own A Clothing Store

The five-foot-one or so inches tall celebrity spouse Daniella used to be an owner of Ruby, a boutique for women in Montclair, N.J. She, though, may have given up the store since these days she lives in California with her husband & children.

When Daniella talked to Totally Mommy in Feb 2015, she admitted to being an owner of a store in New York, called Shelf Life. It apparently dealt with closets specifically designed to help customers with arrangements and orders.

Liben at the time said she came up with the idea after some of her clients from New Jersey talked about organizing issues with their closets. It now, however, is unclear, if Daniella still owns the NYC store or has ventured into other businesses.

The Dirty Grandpa actor, Adam Pally, and Daniella married each other on Thursday evening in July 2008. They had their wedding at Chelsea Piers in New York and had Rabbi Stanley Asekoff as their officiator.

Back then, Pally was just starting his career and was described as “an actor in television commercials” and Liben, on the other hand, owned a boutique in New Jersey for women, called Ruby.

Adam, at the time, was also at the Upright Citizens Brigade Theater in New York, where he coached other actors. After the wedding, the Sonic The Hedgehog actor and Liben became parents to three children, a son, Cole (born, 2012), Georgia Grace (b.2013), and Drake.

Daniella And Adam Have Been Together Since High School

Daniella and Adam’s relationship started a long time before their wedding. They apparently are together since high school when they were in their mid-teens.

This Adam revealed in an interview with Wired Youtube in 2018. While appearing with other members of the Dog Days cast for the q and a, Adam whilst answering some of the most asked questions about him from Google, fielded one about his wife.

To the question “Who is Adam Pally’s wife?” the Little Hours actor gave a response by saying,

“My wife is my high school sweetheart.”

While Liben has never had movie credits in her career, she did once appear with her husband Adam Pally in Steph and Ayesha Curry’s HBO Max series, About Last Night. In the show, celebrity couples compete head-to-head in relationship-based trivia and games.

Although Liben and her husband have been together since their teenage years, they did apparently break up somewhere in the past.

The allegedly five-foot-ten-inches tall actor Adam while talking to the Cosmopolitan in Oct 2014 said the time when his now-wife broke up with him was a tough breakup. The Ducktales actor added he took that separation pretty hard.

Daniella apparently chose a gift for the Mindy Project actress, Mindy Kaling in Jan 2018 when she was pregnant for the first time. Liben in actuality helped pick the souvenir on behalf of her actor husband who was then co-star of Kaling in her comedy The Mindy Project.

Kaling was pregnant during the final season of The Mindy Project, which aired its last episode in November 2017. One month later, the Ocean’s 8 actresses welcomed a daughter named Katherine.

Adam and the Office alum Kaling have also been each other’s friends since. Daniella’s husband, however, had no clue what baby gift he was going to give his then-co-star when she was expecting. Whilst explaining how his wife helped him in that regard, Pally said,

“You know my wife [Daniella Liben] handles all this. I’m so cliche so I don’t know. I’m assuming we did because my wife is so on it. I don’t know what it is. I’m sure it’s very cute and very expensive!”

Is Daniella Liben As Rich As Her Husband, Adam; What Is Her Net Worth?

For all the years Daniell’s husband, Adam has spent in the acting business, a tenable estimate of his net worth is yet to be put into records. He nonetheless is presumed to be a millionaire since in the past there have been a couple of instances when the Creepshow actor did property deals worth seven figures.

Previously, Pally and his wife, Daniella owned a home in the Fairfax area of Los Angeles, which they later sold in 2013 for $1.62 million, according to the Los Angeles Times.

The house which the couple had initially listed for $1.7 million, featured 2,400 square feet of living space, including three bedrooms, an office, fireplace, dining room, and French doors leading out to a pool. Then in 2017, the Pally couple paid around $3.2 million for the luxury apartment in New York.

Though later Daniella and her actor spouse also placed this property on the market for $4,095,000.

Despite the aforesaid figures and perspectives, something that is no less than a mystery is the real net worth of Pally’s wife, Daniell, herself. Whatever the case, it seems unlikely the mother of three doesn’t get to fancy the first-class lifestyle in light of her family’s celebrity status.

Not to mention, she is also from a well-off family.

Is Daniella Liben On Social Media

While her husband, Adam is quite a live one with his Instagram and Facebook anonym, Daniella, turns out, is pretty reserved in that course.

Although Liben does have an Instagram she allegedly operates it off the public domain. She, nonetheless, is adequately exertive on Twitter. Her blue bird handles mostly talk about her whims with her children, the shows she is excited about, and promoting her husband’s shows.