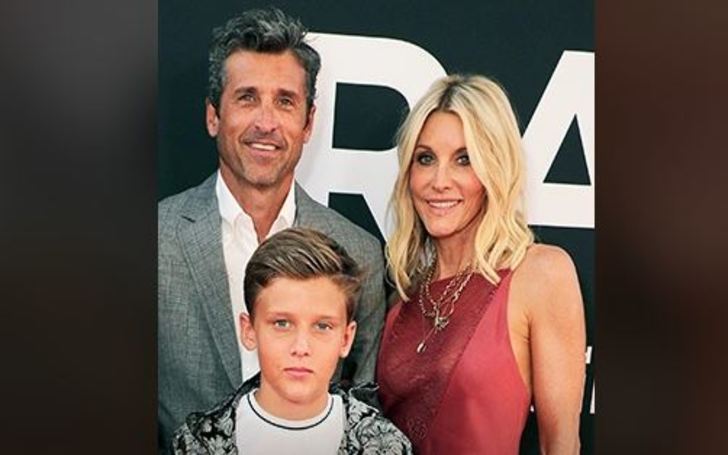 Darby Galen Demsey is the son of the Grey’s Anatomy actor, Patrick Demsey, and his wife of over twenty years, Jillian Fink. Galen is one of the twin sons of Demsey and Fink who have three children in total.

While Dempsey’s marriage with Jillian wasn’t easy, they nonetheless managed to emerge out stronger with every hurdle. And their union including their sons and daughter is arguably one of the most strong families in Hollywood.  The piece down below talks about the one man from the next generation of the Demsey clan, Darby Galen Demsey who although quite young might be of some interest.

Darby Galen Dempsey Was On The Cover Of A People Magazine

Darby was born on Feb 1, 2007 (age 14 years). The delivery happened on Thursday in Los Angeles along with his twin brother Sullivan Patrick Dempsey.

Shortly after the birth, Darby along with his father Dempsey and his twin brother graced the cover of the People magazine.

Talking about the journey of becoming the father for the second time, the Valentine’s Day star said he was watching everything that was going on with the doctors.

He admits that when he and Jillian first learned they were expecting not one, but two new additions to the family, he found it a little overwhelming. He though said his worries quickly subsided when he met the boys.

Galen’s paternal grandmother, Amanda (née Casson), was a school secretary, and his grandfather, William, was an insurance salesman. His maternal granddad was an education administrator from Denton, Texas.

He Has A Sister

In addition to his twin brother, Sullivan, Darby has an elder sister, Talula Fyfe Dempsey, born on February 20, 2002. She was 5 when her two younger brothers were born.

It was Talula who had helped decide on the Darby and Sullivan’s names.

The possibility of Darby and his brother, Sullivan seeing any younger sibling has been ruled out for a long time. In fact, the decision took place right after their birth or even before that.

Dempsey once stated that he and his wife were done when asked if he was adding any more offspring.

Jillian is one of the most notable makeup artists in the show biz. She has styled for stars including Julia Roberts, Bradley Cooper, and even her husband.

She also has her own luxury line of lip and cheek tints in addition to lid tints, kohl eyeliner, and a gold sculpting bar in her collection.

His Parents, Patrick And Jillian’s Relationship

Darby’s parents married on July 31, 1999. People report the wedding took place at a farmhouse in Maine that belonged to the actor’s family.

Galen’s folks met each other at a hair salon after Patrick came for a haircut at Jill’s salon. Remembering the first encounter, Jill said

“I was shocked [when he came in for an appointment] but at the same time, I was happy because he was so cute,”

Then after three years of haircuts, Galen’s dad came to know that she was single and finally asked her out. They then dated for three months before moving in together.

The couple hit a rough patch in January 2015 when Darby’s mother, Fink filed for divorce from the father of her three children.

The mother of three initially cited irreconcilable differences as the reason. She also sought joint custody of her kids with spousal and child support.

Dempsey and Fink, however, decided to reconcile within a year. And in the start of 2016, the media spotted them hanging out with each other on multiple occasions looking pretty amicable.

After some months in May of the same year, Dempsey confirmed they were back together. In an interview with Evening Standard, when asked if he and Fink reconciled, the Lewiston native told,

Allegedly, Darby’s parents, Dempsey and Fink decided to work on their marriage with the help of counseling. The Maine-born actor said one of the reasons he and his wife got back together was because they wanted to be role models for their kids.

He Goes To Racing With His Father

In addition to acting, Patrick also enjoys auto racing in his spare time. Since 2013, his dad has been involved with such professional competitions to whatever extent.

The father of Fink’s children has been a participant in prestigious pro-am events such as the 24 Hours of Le Mans, Rolex 24 at Daytona sports car race, and Tecate SCORE Baja 1000 off-road race.

Even when Darby and his twin brother were just a few days old, father, Patrick mentioned how he couldn’t wait to give the boys a spin on the race track. And when they were both 12 years old, they joined their dad as often as they could. Dempsey said, “Racing is a family sport.”

Darby Galen Dempsey Father Was Married To Another Woman

Before Fink, Darby’s father was in a marital relationship with Rochelle “Rocky” Parker. They were married from 1987 to 1994.

They met in 1984, during one of Dempsey’s first acting jobs. Rocky then was a widowed mother of three. They had an age difference of 26 years with Patrick being the junior.

They divorced with Rocky citing “irreconcilable differences” and Patrick also admitted to cheating on her.

Demsey’s former wife also said the Scream 3 star would beat her. She though later retracted the allegations of domestic violence.

Other Facts About Darby Dempsey

With People in 2007, the People’s Sexiest Man Alive said Sullivan is sort of the grumpy old man while Darby is very much peaceful, like “quiet little Buddha.” he told People in 2007.

Dempsey and his wife, Jill had to deliver Darby and Sullivan two weeks early by cesarean section.