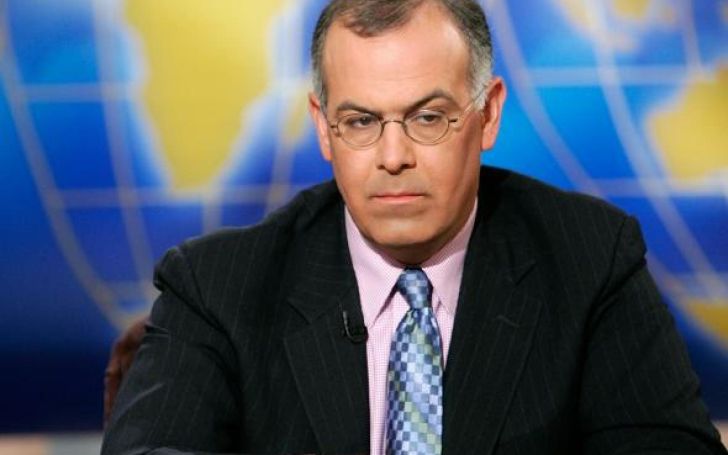 We all know how outspoken the conservative commentator David Brooks can get. It is his personality that gives him notoriety among the viewers. He is also an accomplished author and writer at the New York Times.

Besides, David has been married two times. Upon divorcing his first partner, he exchanged vows with someone who is 23-years younger than him or as many would call it, marrying a trophy wife!

So who is David Brooks’ wife? A little hint, she is also a writer and shares the same passion for writing books just like David.

Who is David Brooks’ wife? They have an age gap of 23-years

In 2017, David got married for the second time. The name of his new wife is Anne Snyder Brooks, who is 36-year-old as of yet. The lovebirds has a significant age gap between them, of 23-years. This often led to several loose talks here and there but the pair could care less about anything else.

Talking about David’s trophy wife as many are calling it, she is a media personality who currently serves as the Editor-in-Chief of Comment Magazine.

She and David share the same love for writing as Anne has also authored a book titled, The Fabric of Character: A Wise Giver’s Guide to Renewing our Social and Moral Landscape.

As for her education, she earned her bachelor’s degree from Wheaton College in Illinois. Later, she graduated with a Master’s degree from Georgetown University.

When and how did David Brooks’ married Anne? Details on Wedding

The wedding ceremony took place on Sunday, August 30th, 2017. Not a whole lot of details of the nuptials has come out except for the fact that it was held in Arboretum, D.C.

The Washington Post states Atlantic Media owner David Bradley and his wife, Katherine Bradley threw a rehearsal luncheon a day before the ceremony.

This was the second time David had tied the knot but first for Anne. At the time of the marriage, Davi was 55 and his bride Anne was 32-year-old.

Since when David and Anne are dating? She was David’s research assistant

Back in 2015, David released his book The Road to Character. In the book, he’d written a 110-word of total admiration and gratitude towards his then 30-year-old New York Times research assistant.

In the acknowledgment section of his book, he was totally gushing over Snyder and used the phrases, “lyricism of her prose” and the “sensitivity of her observations.”

Moreover, David also said it was Anne who motivated him to write a book about ‘morality’ and ‘inner life.’ She worked closely with him for three years. Furthermore, the author also revealed, “If there are any important points in this book, they probably come from Anne.”

Safe to say, they had started dating since the early 2010s.

Though David, after a few days backtracked from his comment towards Anne, it was more than evident he was head over hills for her. You know, Anne was the only one who was directly acknowledged by David. Other people were called Fact-checker, editor, friend, parent, or even ex-wife.

David Brooks was previously married to Sarah Brooks: Shares three children with her

Before his marriage with the beautiful Anne Snyder, he was in a marital relationship with Sarah M Brooks. The commentator’s first wife was born Jane Hughes but she later converted to David’s religion, Judaism, and changed her name to Sarah.

The pair tied the knot in 1986, after dating for several years. From their union, they became proud parents of three beautiful children, two sons and a daughter. Their eldest son, Joshua “Josh” Brooks serves in the Israel Defense Force. He is a graduate of Indiana University. Apart from Joshua, the identity of their two kids is behind closed doors.

David was quite close to his kids when they were growing up. Back then, he used to write while staying at his home. He stated in an interview with Oprah Mag about making it a priority to be physically close to them. What’s more, whenever someone invited him to an event or a party, David used to do first think about how this will impact his children and then make the decision of either accepting or rejecting the offer.

David met Sarah while studying at the University of Chicago

The American-Canadian political commentator first came across Sarah during his days as a student at the University of Chicago. David was a junior when Sarah transferred to the University.

As David recalls, she had curly brown hair and a body of a field hockey player. He first glanced at his future wife in the dining hall. Subsequently, the pair became close pals.

After a few months, the friendship blossomed into love and they started going out. During their very first date, the duo found out they had the same interest in liberal politics and Hubert Humphrey’s poster.

You never know what the future holds. David and Sarah were happily wedded for 27-years before their divorce in November 2014. The news came out of nowhere.

At first, The Washington Post claimed they divorced in 2013, but as it turns out they were not divorced in 2013. The duo even purchased a million-dollar residence in D.C.’s Cleveland Park neighborhood.

Well, the rumors were all put to rest eventually and their divorce finalized in 2014. Despite their divorce, the pair took care of their kids together. David even acknowledged this fact in his book The Road To Character. He thanked her for taking care of their three children.