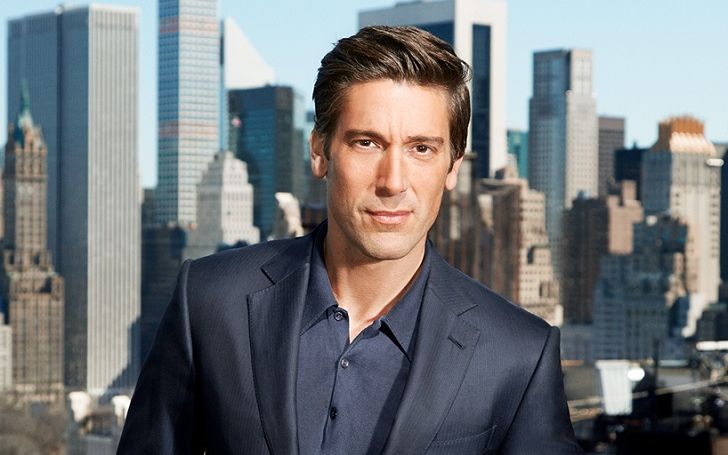 There are many aspects of David’s life that you don’t know including his parents, siblings, education, and early life. Find out all here!

Who is David Muir?

American veteran journalist Muir is the most popular newsman in the media field. He previously worked for several well-known networks like WTHV and WCVB before joining ABC News in 2003.

What Ethnicity is David Muir?

Muir belongs to the white ethnicity and holds an American nationality. His zodiac sign is Scorpio.

Born on 8th November 1973, in Syracuse, New York, Muir is the son of Pat Mills (mother) and Ronald Muir (father).

Always stuck in the bow. Haha. Happy bday, Dad. July 3. And what a special 4th. Beautiful upstate then and now. #ff

His parents got divorced when he was still a child. His mom then moved to Skaneateles. Despite their separation, David’s mother and dad raised their little boy together. David once told in an interview with Syracuse, “One of the images I won’t forget is my mother and my father driving me there on summer vacation or school breaks.”

David Muir Has one Sister

Muir has an older sister named Rebecca Muir who owns a farm in Borodino, N.Y. She mostly grows heirloom tomatoes and other items. She and her husband sell their products through a delivery service. David also often visits her farm.

He also has two younger step-siblings from his father’s second marriage.

No, David Muir and John Muir are not related. People started thinking they might be related because both of them share the same last name. But, other than their surnames, they don’t share anything.

John Muir was a Scottish-American mountaineer. His great contribution to preserving nature also named him as “Father of the National Parks.”

Strong Passion for Journalism since Childhood

David was always destined to be a broadcast journalist since childhood. By the age of 12, he started watching news programs each evening at 6 p.m. Furthermore, during summer break, unlike other kids who’d ask their parents to take them to some fun place, David would request to go to the news station.

He also cites prominent anchor, Peter Jennings as the biggest influencer in his media career. Muir once told People. “I didn’t care. I thought Peter Jennings was the James Bond of evening news”

Moreover, the college even gave him an honorary Doctor of Letters degree and the Jessica Savitch Award of Distinction for Excellence in Journalism on 13th March 2015.

One of his professors in college also told him he had “the cut of a TV Newsman.” Muir later joined Georgetown University and then went on to study at the University of Salamanca in Spain.

David landed his first job as an anchor and a reporter at WTVH-TV, in Syracuse in 1994. After his six-year association with the network, he joined WCVB and worked until 2003.

Muir made a major breakthrough after joining ABC News as an anchor in August 2003. He initially worked in the World News Now, the overnight news program.

At the moment, he works as the anchor of ABC World News Tonight and is also co-anchor of its magazine 20/20 along with Amy Robach. Furthermore, he became the lead anchor of breaking news and special event coverage for ABC News in 2021.

In 2014, Muir was named the anchor and managing editor of the nightly news show World News Tonight with David Muir.

He previously worked for ABC’s World News with Diane Sawyer, as both weekend anchor and principal substitute anchor.

David Muir is not married yet. The handsome hunk with widespread popularity has successfully kept his every personal detail under the radar to date.

Muir has yet to come out with any of his relationships publically.

Speculation about his sexuality started buzzing when Muir was photographed with a correspondent for ABC News, Gio Bentize back in 2015.

Geo is openly gay so fans also thought David is the same case. However, neither David nor Gio confirmed their alleged romance to the media.

What is David Muir Net Worth and Salary?

Besides, in October 2019, David made a big investment when he splurged $7 million dollars for a luxurious house in Skaneateles Lake. The house surrounds a total area of the 4,300-square foot, while the full property is 6 acres. Aside from this, it consists of six bedrooms, two kitchens, three bathrooms, and one cozy fireplace.

Other Interesting Facts of David Muir

Is David Muir Gay? His Relationship History to This Date