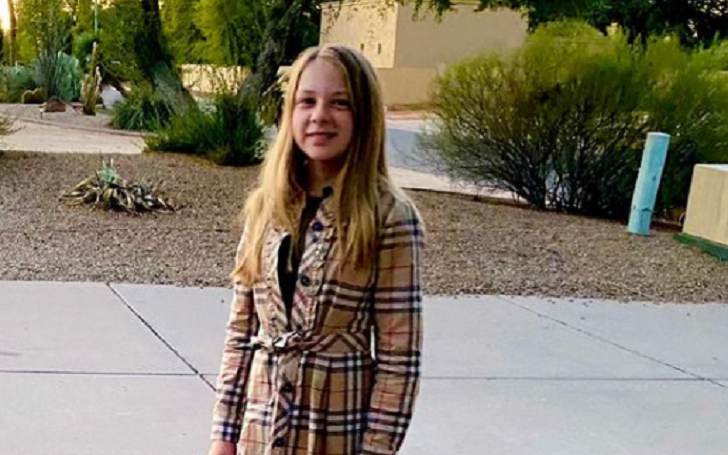 Harper Spade is the only child of actor and stand-up comedian David Spade. Her father first grabbed attention following his appearance in Saturday Night Live. He has also worked in several hit small and big-screen projects, most notably on Tommy Boy, Black Sheep, Rules of Engagement, and more.

Despite her dad’s immense popularity, her mother Jillian, a former Playboy model has kept her life out of the spotlight. In today’s episode, know the untold truth about Harper Spade’s life as a star kid. Besides, also know about her parents’ relationship.

Harper is the daughter of David Spade and his ex-girlfriend, Jillian Grace. The former flames first met at the deli in late 2005. At the time, Jillian, a model from St. Louis, was dating another guy. She and her future boyfriend David remained friends until her break up with her ex-boyfriend in September 2007.

The couple started seeing each other soon after her break up. A close pal of Jillian told Star Magazine that she “was moving home to Missouri and called David to give him the news. David said to her, ‘So, you’re single now? Great! When can I see you?”

Soon after the call from Jillian, the two involved in a romantic relationship. They primarily used to go on dates in Los Angeles.

After a few months of a love affair, an insider disclosed that the couple also started talking about having a baby together. The friend of Grace told Star Magazine,

“It was a mutual discussion. He told her that as he was getting older, it was something he was thinking about. And Jillian replied. ‘Are you sure this is something you want? It could happen!’ They knowingly had unprotected sex that night…”

It was a 2008 Christmas time when Grace learned about her pregnancy with their first child. Her friend further said that the model instantly shared the happy news with her boyfriend David.

“She texted him the message, ‘Congratulations! You’re going to be a father. Merry Christmas!.”

“David got back to her and said, ‘Are you sure? Are you OK?”

The actor looked too positive towards Jillian’s pregnancy at first but things immediately changed when David was thinking about his Hollywood career.

A colleague of Jillian said despite David’s initial positive reaction, the then-ready-to-be father changed his mind and started telling his partner, “that having the child could hurt his career, and that her own modeling career would be over.”

Eventually, Harper was born on August 26, 2008, in Missouri, in the United States. A representative for the former Saturday Night Live star, Meredith O’Sullivan exclusively confirmed to People,

“David and Jillian have been in close contact throughout her pregnancy and he plans to go see the baby during his first break from shooting Rules of Engagement.”

Despite that all, the father and daughter now share a happy relationship. David often appears spending his time with his pre-teen girl and her mother.

David Stopped Talking to His Father After Welcoming His Own Daughter

The actor and comedian David revealed in his audiobook called A Polaroid Guy in a Snapchat World how his relationship with his estranged father (who goes by the nickname Sam) changed drastically after his daughter Harper’s birth.

He described his father as “cool and funny,” but also “a bit of a skirt-chaser, times a thousand million,” and “a bit of boozy Suzy.” His dad suddenly disappeared from the family when Spade was four and his brothers Bryan was eight and Andy was six. After the early absence of a father from the family, their single mother Judith M. Spade raised them.

While growing up, David used to meet his father only a couple of times a year. They didn’t even have their dad’s phone number at the time.

Putting all the bad things aside, the father and son were on good terms in the following years. They even went to Arizona together at one point.

However, things took a different turn when David became a father himself. The actor told People magazine that his daughter became an eye-opener to end the relationship with his own father because David himself knew how important is fatherly love for any children and how his father Sam was irresponsible towards his family. He then stopped talking to his father.

Many of David’s fans are curious to know how Harper’s life is going on as a popular star kid. Undoubtedly, Harper had a wonderful upbringing and now relishes a very comfortable lifestyle often spending time with her father and with her mother.

As for her net worth, Spade is just 12 years old and is still at school, so there is no valid information on her estimated wealth.

On the other hand, her popular father David has a net worth of $60 million.

Her Mother Was Playboy Model

Jillian Grace Harper, who was born on December 20, 1985, became the Playmate of the Month in the March 2005 issue of Playboy magazine. In addition to her modeling career, she is also an actress who appeared in projects like The Girls Next Door, Epic Movie, The Comebacks, and The House Bunny as well.