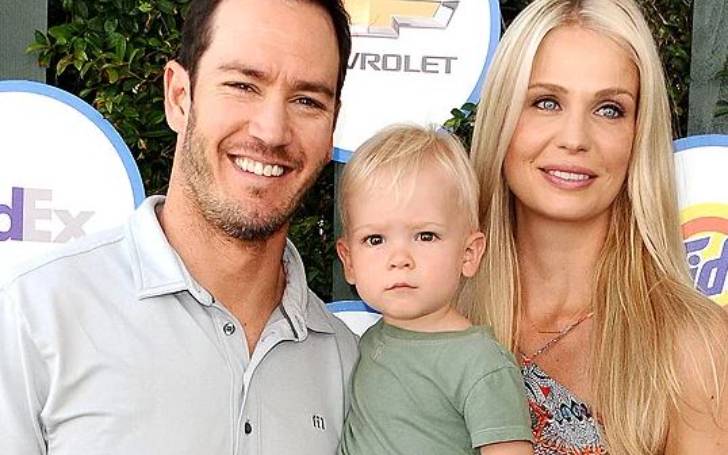 Dekker Edward Gosselaar is the son of Mark-Paul Gosselaar and Catriona McGinn. His father Mark is an actor famous for his work in the series Saved by the Bell. The series ran from the year 1989 to 2000.

Due to this star kid status, Dekker is a subject of curiosity, especially for Mark’s fans. After all, he is the son of the 90s heartthrob. The majority of us would love to know if Dekker will also join the showbiz at a young age just like his dad or if his father is altogether against it?

Let’s find out all the answers regarding Dekker Edward Gosselaar. In this article, we will tell you all about his life as a star kid, his relationship with his parents, and other details!

He came knocking into this world on 30th September 2013 in Los Angeles, California. The son of Mark and Catriona Gosselaar, Dekker belongs to the Caucasian ethnicity. In addition, he belongs to the mixed ancestry of German, Dutch Jewish, and Indonesian.

Although his father can speak Dutch and a little bit of Tagalog, Dekker only speaks the English language. It seems Mark doesn’t really put pressure on his kids in regards to what language they want to speak.

As of now, Dekker lives alongside his parents and sister at their residence in Santa Clarita Valley.

Talking about the meaning of his name, his first name Dekker means piercing and is related to the Hebrew name Dekker.

We all have heard about the horrors Jewish people had to face during Adolf Hitler’s regime. Likewise, Dekker’s great-great-grandparents Hartog and Hester Gosselaar shared the same fate as millions of Jewish who died during the Holocaust.

They were reportedly murdered at the Sobibor extermination camp during the Holocaust.

He has one biological sister Lachlyn Hope Gosselaar, and two half-siblings, Michael Charles born on January 31st, 2004, and Ava Lorenn Gosselaar, born in 2006. Her father Mark shares Michael and Ava with his ex-wife, Lisa Ann Russell.

His sister Lachlyn, born on February 17th, 2015, shares the same middle name as their mother Catriona. Both Dekker and Lachlyn are their parents’ heartbeats. Rarely does the couple ever leave their children out of their sight. In fact, the majority of the time when Mark is going to a public event, he would often bring his kids with him as well.

Talking about Dekker’s relationship with his half-siblings, well, we can’t say anything for certain. Considering how Mark isn’t active in any major social media account, we rarely ever find pictures of the four Gosselaar siblings together. That being said, they have appeared together with a handful of times.

Mark-Paul Gosselaar and His sons share a common passion

Before you jump the gun and say, yeah, they most definitely love acting just like their dad. Although the statement is somehow true, we’re talking about a different passion here.

So back in 2015, at the Safe Kids Day event in Los Angeles, while talking with PEOPLE, Mark revealed that his kids share the same passion for reading just like their old man. He said, “My son always reaches for Where the Wild Things Are. I think he’s a little bit like Max, in the book. That’s his go-to book right now.”

In the same interview, he also talked about the importance of wearing safety gear whilst riding a motorcycle or bike. He stated, “A big thing for me is helmets. I grew up racing motocross and bicycles and all that stuff. So helmets to me is a big, big thing.”

As we all know that Mark started out his career during his teens. At the mere age of 15, the then-emerging actor joined the cast of Saved by the Bell. He played the role of Zack Morris.

Having been started out as a star kid himself it’s natural that many of us assume he might encourage his kids to do so as well if they are interested that is. Although his older son Michael is interested in acting, Mark doesn’t want him to start young like the way he did.

As for the reason behind his stance, he said, “The rejection that you deal with as a kid, I thought it was pretty blunt growing up, like, the reasons for why you didn’t get [the role]. They’re like, ‘Eh, they just didn’t like your look.’ ‘Oh, okay. Yeah, I’ll go process that.'”

To be fair his statement did really sound crushing to a child, isn’t it?! He further added, “That’s one of the reasons I don’t want my children in it is because I don’t feel it’s a place for children.”

We can assume Mark will also put this restriction on his youngest son Dekker if he also chose to walk the path of his famous father.

Back in 2015 during an interview with Today, Dekker talked about how his kids are big fans of his show. Further, he also stated that they love the show not because their dad is in it but because it’s real. He also said that his son Michael many times relates to the show as he himself often goes through similar situations in his school.

Besides, a couple of years later in 2019, in a sitdown with Access, Gosselaar divulged his children’s friends, after watching the show Saved By The Bell, thinks he is hot. Well, they are not wrong, to be honest.

This is quite an intriguing fact to know about the star kid. Mark once said in an interview with Access that his youngest son Dekker Edward Gosselaar ‘is enamored with Gravedigger.’ For those of you who don’t know, Grave Digger is a monster truck racing team in the Feld Entertainment Monster Jam.

What’s more, his father even got out of a live Football game in order to take his son to the nearest monster truck event. Talk about being a doting dad.

Considering how rich his father is, it’s not a surprise that Dekker has it all. His father has a net worth of $8 million. He has earned the majority of his wealth from his years and years of career in the industry.