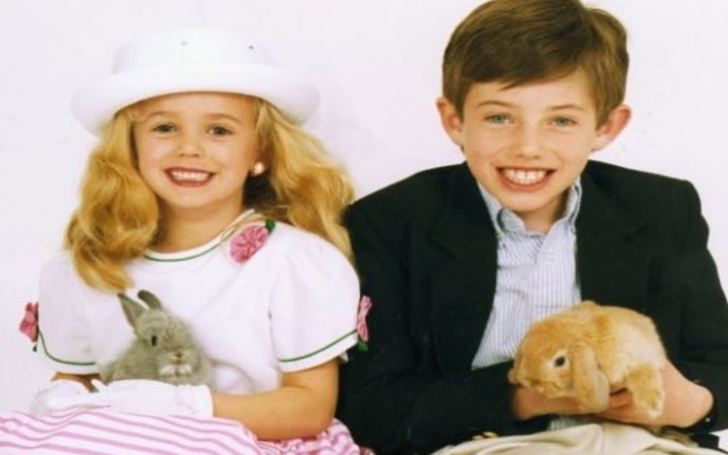 Burke Ramsey is the brother of the late JonBenét Patricia Ramsey, a child beauty queen who was killed at the age of six in her family’s home in Boulder, Colorado. The infamous 1996 homicide is still an unsolved crime and remains an open investigation with the Boulder Police Department.

After the tragic incident, the rest of JonBenet’s family members fell under suspicion of the killing of the little girl. Along with her parents, John and Patsy, some began to suggest Burke also had a hand in his sister’s death.

Even after 21 years, JonBenet’s murder remains one of the most puzzling and popularly discussed unsolved mysteries in American history.

Scroll down for the complete details on Burke’s sister’s murder mystery, his early life, and how is he coping up with all the blames and the death of his sister, itself.

Burke Ramsey Is The Son Of A Successful Businessman

The now 34-year-old Burke Ramsey was born Jan. 27, 1987, to parents John Bennett Ramsey and Patsy Ramsey. His father John was a successful businessman. He was in the Navy as a Civil Engineer Corps officer. Burke’s father later formed the Advanced Product Group, which then merged with two companies to become Access Graphics, a successful computer services company

After the death of his mother, Burke’s father, John Ramsey briefly dated Beth Twitty, mother of Natalee Holloway, who disappeared in Aruba in 2005. They later parted with John citing “Beth was behind me in terms of the grief cycle.”

JonBenet’s father then went on to marry the twice-divorced Las Vegas designer, Jan Rousseaux, whom he met in 2010.

John and Patsy’s son, Burke Ramsey studied at Purdue University, graduating with a degree in computer technology in 2010.

In addition to JonBenet, Burke also has two older half-siblings from his father, John’s previous relationship.

Where Was Burke Ramsey During The Murder Of His Sister, JonBenet?

Burke Ramsey was just nine when his sister met the tragic accident in the basement of the family’s home in Boulder, Colorado. He once said at the time of his sister’s death his mom searched his room saying, “Where’s my baby? Where’s my baby?

The toddler sister of Burke had been strangled, hit over the head, and was underneath a white blanket on Boxing Day.

Before that, Ramsey’s parents reported to police that their daughter had been kidnapped and that they had found a note demanding a ransom of $118,000.

When they found the dead body of their daughter, they said she had a nylon cord around her neck, her wrists bound above her head, and duct tape over her mouth.

Several years after having the mystery hanging, a CBS mini-series claimed Burke was to blame for JonBenet’s death after all. Though, a handful of investigational documents had been suggesting that the brother was the most possible culprit.

Then in 2008, Burke along with his two parents got a clean sheet after the investigation team detected three pieces of male DNA on JonBenét’s clothing.

Further, Patsy and John had also denied Burke was responsible for his sister’s death and said he was sleeping until after they called the police.

On the other hand, the original evidence that helped prove Burke’s innocence has since received challenges. The experts claim the conclusions could have stemmed from other sources amid revelations the FBI made several mistakes when analyzing the crime scene.

For instance, a 911 conversation later suggested they heard John saying, ‘We’re not speaking to you.’ The tone apparently was for a kid (speculatively for Burke). Further call record showed Patsy exclaiming, “What did you do? Help me, Jesus!”

Investigators Concluded Burke Killed His Sister Because She Took His Snacks

Also, the FBI team claimed when JonBenet tried to take some of the fruit snacks (pineapple) from her brother, then 9-year-old Burke lost it and forcefully struck his sister with a torch. Several media afterward theorized that in the ensuing panic, Ramsey strangled his own sister to death.

Apparently, the autopsy also revealed that there were pieces of undigested pineapple in JonBenet’s system.

The research team subsequently suspected Burke Ramsey accidentally killed his sister. Then after finding out, his parents Patsy and John tried to cover up the murder in order to protect their son.

Investigators reported the deceased’s brother was jealous of her beauty queen title and had even smeared poo on her Christmas presents. They argued Burke had always been quick to anger even before his sister’s death. As such, during a game of golf with his sister, the older brother lost his temper and hit her in the head with a golf club, leaving a scar on her head.

CBS even released a document, The Case of JonBenét Ramsey, explaining how JonBenet’s brother was the real killer.

In 2016, Ramsey sued the network for defamation asking $750 million — $250 million in compensatory damages and no less than $500 million in punitive damages. He likewise sued Werner Spitz, the forensic pathologist involved in the CBS docuseries for $150 million.

Burke and the CBS later settled the dispute out of court for an undisclosed amount.

Ramsey had also sued Dr. Werner Spitz who accused him of killing his six-year-old sister in the documentary.

While talking with Dr. Phil in September 2016, Burke stressed his innocence, along with that of his mother and father. The now software engineer brother of JonBenet added he was also ready to take a lie detector test to be in the clear. He additionally denied the allegation that he had sexually abused his sister.

Some nonetheless claimed him still being the murderer reasoning that he had a “creepy” attitude the whole time he was on the show. In response, Dr. Phil explained Burke was just socially awkward.

In the wake of JonBenét’s killing, the media and people suspected the whole Ramsey family including the little girl’s late mother, Patsy. This was especially on the grounds that the handwriting on the ransom note was similar to her own.

“Not to say she never got upset, but nothing near laying a finger on us, let alone killing her child.”

The tech guy maintained his mother never even spanked her kids, ‘not even close.’

Private investigator Ollie Gray alleged it was Michael Helgoth, whose family owned a junkyard on the outskirts of the city that had killed Burke’s sister, JonBenet. Though, he, himself, died of an apparent suicide in 1997. The police put him off the suspects’ list a few years later when they found that none of his DNA was under JonBenet’s fingernails or in her underwear.

Then in 2006, a pedophile former teacher named John Mark Karr confessed to murdering the blonde kid. He was also let go of as his DNA did not match that found on the girl’s body either.

In like manner, the officials detained several suspects but to date, none has been convicted with strong credence.

Where Is Burke Ramsey Now?

InTouch Weekly in June 2018, reported Burke has long been preferring to live a quiet life, starting from the death of his sister. He has been working from home even before the pandemic-2020. This he presumably did in order to save himself from the attack of people.

It is also unclear if Ramsey is married or has a romantic partner of some sort. However, in 2015, news.com.au shared a picture that showed Burke by the side of an unidentified woman — who then many speculated as his girlfriend/wife.

In 2012, his dad, John Ramsey, told People that his son had “matured” and was living a “pretty quiet” life. He at the time also confirmed his son was doing great with a girlfriend and a job in the high-tech industry. Though, it is unsure if the older brother of JonBenet is still with the same lady. The father of four also said his son with Patsy had a 401(k) plan and an IRA.