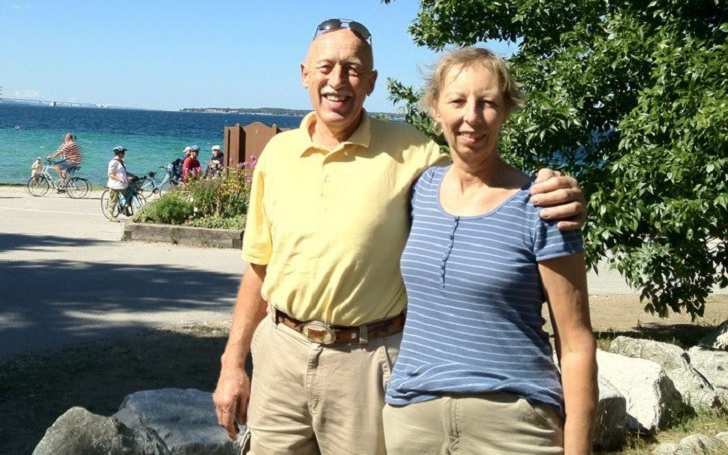 Diane Pol (aka Diane K. Dalrymple Pol) is an office manager at her own Veterinary care called Pol Veterinary Services, in Nottawa Township, Michigan. She has been the pivotal part of the office along with her husband Jan Pol since its formation in 1981.

The couple who are married for over a half-century came into the limelight after their appearance on the reality TV show The Incredible Dr. Pol. It mainly documents Jan’s veterinarian service in the rural Weidman.

Besides, also find out the adoptive mother of three Diane does share any biological children with her hubby or not. Her early life and many other details are mentioned below!

Where is Diane Pol From?

Pol was born on February 6th, 1944, in Mayville, Michigan, the United States of America. She was raised in Michigan along with her family. Diane, 76, is an American as per her nationality and belongs to Caucasian ethnicity.

Diane is a well-read woman

Pol graduated from Mayville Community High School. She later went on to study at Michigan State University and earned her Master’s degree in special reading from the college.

Diane currently works at her own veterinarian care Pol Veterinary Services in a collaboration with her hubby of over fifty years Jan. They initiated the practice in 1981.

The couple faced some major financial crises at the beginning of the company. Pol told Today’s Veterinary Practice about how much they were interested in opening their own practice,

“My first experience after graduating was working for a veterinarian in Harbor Beach, Michigan. However, my wife, Diane, and I were eager to start our own practice here in Weidman, Michigan. When the practice opened in 1981, 80% of our practice was dairy, with the remaining 20% equine and small animals.”

After the couple saw some progress in their business, they also decided to expand it and bought more property next door to build a clinic—a double-wide trailer.

Diane told The Advertiser she enjoys meeting new people and their animals at the clinic.

Despite her years of work with all sorts of animals, Diane is yet to quite familiar with snakes. She said,

Diane is the main cast member of the reality TV show ‘The Incredible Dr. Pol’ along with her husband Jan, their son Charles, and two other members Brenda Grettenberger and Nicole Arcy. The series premiered on Nat Geo Wild in 2011. It widely features Jan’s and his family members’ service at Pol Veterinary Services.

Is a former teacher

Pol’s fortune is $500,000. She makes her money from her own business. On the other hand, her husband Jan’s net worth is $1 million.

The couple exchanged their vows in 1967, in Mayville. The wedding attendants were their family members and close friends. The iconic couple has been leading a delightful married life for over a half-century and their longtime marital relationship still looks pretty strong.

Although it is hard for everyone to balance their love life and professional life hand in hand, Diane and her hubby Jan are going smoothly with no conflict.

The two came across when Jan was a foreign exchange student at Mayville High School in 1961. The two dated for many years before walking down the aisle.

Soon after their nuptials, they went to Mayville and lived there for nine months. The couple also spent several years in the Netherlands before setting-up in Harbor Beach, where Jan worked for a veterinarian for years.

The two then made their move to Weidman, Michigan.

Do You Know Beth Pol: Here Are Facts You Didn’t Know About Her

Their children: Diane adopted one of her best friend’s daughter after her death

Despite their long-term marriage, they are yet to share a biological child. But, Diane and Jan are adoptive parents of three children. They adopted their two kids, a daughter Kathy and a son Charles at birth.

Diane adopted their third child, a daughter Diane L at the age of 17 after her biological mother died. She was the best friend of her late mom. Besides, Diane’s husband Jan became Diane Jr.’s foster dad for eight years before he adopted her.

She has a close relationship with both of her adoptive parents. On the occasion of 2016 Mother’s Day, Diane posted a photo of her biological and adoptive mother with a lengthy message,

“On Mother’s Day I am yet again reminded how blessed I am to have had two mothers. One who gave birth to me, raised me for nine years the loved me enough to ask her best friend to take care of me after she died. The other took me in and chose to love me, a broken child with many, many issues. Mom Diane loved me as her one from the day I moved in, no questions asked.”

On the other hand, their adoptive son Charles, the University of Miami is the regular cast member of The Incredible Dr. Pol. He has been in a beautiful marital relationship with his wife Beth Pol.