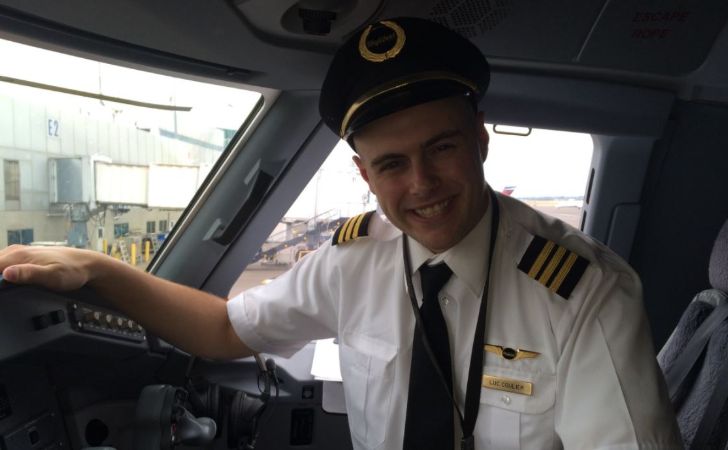 Most of the celebrity kids often tend to pursue a career as that of their parents. And the case is the same for Luc Coulier, son of actor, comedian, & private pilot Dave Coulier. But there’s a twist. Unlike his father, Luc seems to have no interest in acting or comedy but he is rather into aviation; he is also a pilot.

The handsome hunk is leading a successful career in the aviation industry. Want to know more about him? Well, in this section, we have brought to every detail his career, relationship, with parents, girlfriend, marriage, and a lot more interesting facts.

Luc Coulier Is a Son of a Famous Actor

It is not a very widely known fact, but Luc Coulier is the only son of actor and comedian Dave Coulier. He was born on November 14, 1990. Like his father, his mother Jayne Modean is also a successful model and actress. Unfortunately, his parents are no more together, but Luc shares a great relationship with both his mom and dad.

Upon landing his first job as a Captain, he shared a beautiful photo with her mom in the plane. Check out the photo here.

Talking about his education, he is an alumnus of Embry–Riddle Aeronautical University, earning his degree in 2013. The 30 years old has since been pursuing a successful career as a professional pilot.

Career: Luc Coulier Is a Pilot By Profession

Pursuing a career in a profession you love is altogether the greatest feeling. And the handsome Luc is already living his passion as a pilot. Following the completion of his formal education from Embry–Riddle Aeronautical University, Luc has been working with some famous companies.

He first began working professionally in 2014 as a SIC CASA212 at Ryan Air, INC. in Anchorage, Alaska. There he worked just for a few months until November 2014.

Later, he joined as a Captain on ERJ-175 at Skywest. As for a fact, his father Dave too made a post on his Instagram as a proud father of a pilot.

Well, since September 9, 2019, he is working as an Airline Pilot/First Officer at FedEx.

Luc Is Engaged To His Girlfriend Alex Cochran

Not many know this but the 30 years old pilot Luc Coulier is engaged to his long-time girlfriend Alex Cochran. The couple had been dating since 2015 and Luc proposed to Alex in March 2020, almost after 5 years of relationship.

In fact, Coulier even posted a photo of him together with his now-finacee flaunting her ring. In the caption, he openly states about his long-time relationship. He wrote,

After five years, I finally asked the most beautiful and amazing girl I’ve ever known to marry me and she said Yes!!! Happy to say I am engaged to the love of my life.

Having already been together for over 5 years, Luc and Alex share a great relationship. In fact, both of them are pretty out and about their love for one another. The duo doesn’t shy away from talking about their love and sharing their photos together on their socials, especially Facebook.
Back on 2019 Valentine’s day, Luc shared a beautiful photo of him together with her. In the caption, he came up with some beautiful lines for the love of his life. He wrote,

Words cannot describe how much I love this girl. I am so blessed and happy to have her in my life and to be able to call her my valentine. I love you so much and happy Valentine’s Day to my beautiful girlfriend Alex Cochran

Is Luc Getting Married Soon?

No doubt, Luc is already engaged to his girlfriend. However, he has not revealed any wedding plans yet. But hopefully, we will soon get to see the love birds as husband and wife.

We wish them years and years of togetherness.

Both His Parents Are Actors

Like we have already mentioned above, Both Luc’s father and mother are actors. In fact, his father is still hugely popular in the industry and has appeared in numerous movies and TV series. Not only this, but he is also a comedian and a private pilot.

His dad Dave is widely known for playing the character named Joey Gladstone on the ABC sitcom Full House. Further, he is also recognized for voicing Peter Venkman on The Real Ghostbusters. Besides, he was also appreciated for his recent work in Dollface alongside Kat Dennings, Nikki Reed, and others.

Some of his other works include Farce of the Penguins, The Little Mermaid, The Even Stevens Movie, Mighty Magiswords, and many others.