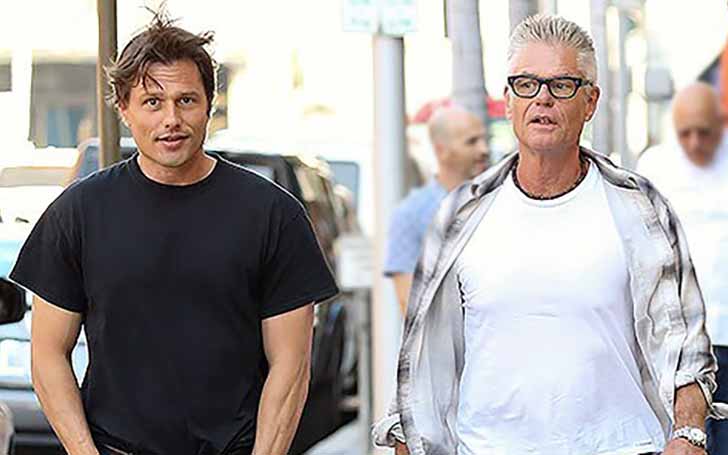 Harry Robinson Hamlin aka Harry Hamlin is a well-known actor, famous for his role as Perseus in the fantasy film Clash of the Titans. Harry came across actress Ursula Andress on the set of the movie. The pair didn’t play each other’s love interest in the movie, however, they started seeing each other off the set shortly after they met. Soon, the young couple became parents to their first child, Dimitri Hamlin.

Despite being the son of two popular Hollywood actors, Dimitri is not a familiar name to many of Harry’s fans. He grabbed attention after he made his appearance in a Season 10 episode of The Real Housewives of Beverly Hills.

In today’s episode, get to know about Harry Hamlin’s firstborn Dimitri Hamlin.

Dimitri was born Dimitri Alexander Hamlin as the first child of both Harry Hamlin and actress Ursula Andress. According to IMDb, Dimitri was born on May 19, 1980, in Los Angeles, California. As of 2021, Hamlin’s age is 41 years. Meanwhile, Bravo TV has reported that Harry and Ursula gave birth to Dimitri in Rome, Italy.

He is an American by his nationality and talking about his ethnicity, he is of mixed heritage. Dimitri’s mother, Andress was born to a Swiss mother and a German father.

His Parents’ Relationship – They Separated While He was an Infant

Dimitri Hamlin’s parents, Harry Hamlin and Ursula Andress started their relationship while they were working together on 1981’s Clash of the Titans. The couple didn’t share scenes in the movie, but that didn’t stop them from coming close to each other. As per Fox News, they met at a cast dinner in London.

“Everyone came, and they sat me next to Ursula,” Hamlin reminisced the moment he met Ursula. He added,

“I didn’t know what to say to her exactly, but somehow the subject of flea markets came up, and I said that I’d been to a flea market the week before I flew over to London. When we got to Rome to start filming there, she called me at the hotel one day and said, ‘I’m only five houses down from the hotel, and there’s a flea market tomorrow on the Porta Portese. Do you want to go?”

That was how Hamlin and Ursula’s relationship began. The couple continued their romance for over three years; they dated from 1979 to 1983. Unfortunately, there is little to no info regarding the reason behind Harry and Ursula’s split. As a matter of fact, the couple was engaged to be married, however, they later called off their engagement.

Dimitri’s mother, Ursula talked to People magazine shortly after her breakup with Harry. In the interview, she expressed her love for her son. “Love affairs and husbands can end, but a child is forever. Dimitri is my love now,” said Ursula.

Hamlin doesn’t have a biological sibling since his parents divorced while he was still an infant. But, he has two half-siblings; sisters Delilah Hamlin and Amelia Hamlin. Harry welcomed his two daughters with his third wife Lisa Rinna. Harry and the Days of Our Lives star got married in 1997.

Meanwhile, Harry doesn’t have any children from his previous two marriages. Harry married actress Laura Johnson as his first wife in 1985 and remained married to her until 1989. Two years later, Harry tied the knot with actress Nicollette Sheridan in 1991, however, their marriage ended short as the now ex-lovebirds divorced in 1992.

Meanwhile, Dimitri’s mother, Ursula does not have any other children even though she had had a couple more relationships. Talking about Dimitri’s relationship with his half-sisters, we don’t see them together often, to be honest. But, he is pretty close to his step-mom Lisa Rinna. He also makes his public appearance with his father and step-mom.

Dimitri Hamlin has not been open about his life in the media, so there are still a lot of facts to be confirmed about his early life. Likewise, details about his academics are also missing. But, as per records, Hamlin graduated from Princeton with a degree in Philosophy.

Dimitri is a Model and TV Personality

Since Dimitri is a son of renowned actors, many of us might have speculated Dimitri would follow in his parents’ footsteps. But, he didn’t show as much interest as we expected. According to IMDb, Dimitri appeared as Enzo Parisi Jr. in the 2005 TV series My Daughter. In 2022, he also appeared in a short film Say Cheese! It also stars Jim Hackett and Alexi Wasser, alongside her.

Besides, Hamlin also showed his interest in techno music while he has also worked as a DJ in some European clubs. Other than that, Harry Hamlin’s son also tried his hand in modeling. He reportedly modeled for some fashion houses, including Abercrombie & Fitch.

What is Dimitri Hamlin Net Worth?

Even though Dimitri has modeled, worked as DJ, and appeared on some TV projects, his earnings are not well documented. Being a star kid, we can safely say he had a lavish childhood, but how much he earns as a professional is not clear yet. Meanwhile, some online tabloids have estimated Dimitri Hamlin’s net worth to be around $500,000 which seems pretty legitimate.

He is not Active on Social Media

Despite being a star kid, Dimitri Hamlin doesn’t indulge in being in the media limelight. In fact, he isn’t even active on social media sites. But on the other hand, his father, stepmother, and half-sisters all are active on social sites like Instagram and Facebook.

Dimitri Hamlin Relationships – Is He Married?

Well, as mentioned earlier, Dimitri prefers living a rather secret life than making it public. He doesn’t make his public appearances often and is out of social media as well. Due to this, his personal life and relationship details are completely out of our reach.

Meanwhile, some online sites have mentioned Dimitri, 41, as an unmarried man. Besides, the sites also reported he is not dating anyone at present as well.

Long before Taylor Swift, Nikki Reed, and Olivia Wilde hit the stardom, Dimitri had appeared alongside them. Hamlin and the three current sensations (who were teenagers by then) appeared in Abercrombie & Fitch magazine’s feature on The Rising Stars – Part II in 2004.