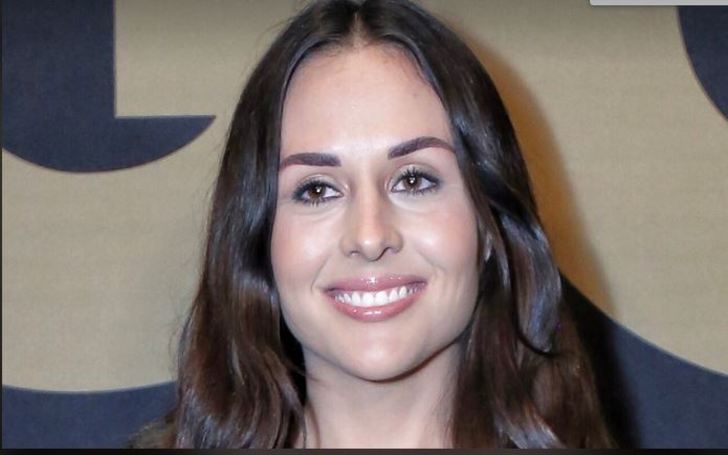 Vega is also a wife to a Cuban actor, Alberto Guerra with whom she has two children. The couple has been married for more than five years.

Know all bout Zuria Vega’s relationship with her husband, her professional life, the actress’s career in the telenovelas, and much more in the article below.

Zuria Vega Is The Daughter Of A Mexican Actor

Vega was born on January 10, 1989 (age 32 years), in Mexico City, Mexico. She is the daughter of Mexican actor Gonzalo Vega and a Spanish mother, Leonora Sisto.

Her older sister is also an actress Marimar Vega known for films Emperatriz, Amor cautivo, El Cumple de la Abuela, Silvana sin lana, among others. Additionally, Vega has a brother and a half-sister from her father’s previous relationship.

In October 2016, she lost her father, Gonzalo to Myelodysplastic syndromes (MDS), a type of rare blood cancer where you don’t have enough healthy blood cells

Vega Has Been In More Than A Dozen Series

Gonzalo Vega’s daughter, Zuria Vega started her acting career as an extra in the play La señora Presidente, which her father also starred and directed. When Zuria was 17 years old, she got her first television role as “Roberta” in the Mexican drama series S.O.S.: Sexo y Otros Secretos.

In 2008 and 2009, she achieved breakthrough success in her home country for her lead roles in the telenovelas Alma de Hierro and Mar de Amor. Two years later, the Mexico City-born actress appeared in an episode of the third season of the crime thriller series, Mujeres Asesinas 3.

In late 2013 and mid-2014, Vega acted in the successful comedy-drama telenovela, Qué pobres tan ricos alongside Jaime Camil. In November 2014, she was among the casts of the Televisa telenovela Que te perdone Dios. The show is a remake of the popular 2000 Mexican telenovela Abrázame muy fuerte.

Zuria Vega Career Since 2017 To Present

In 2017, Zuria starred in the telenovela Mi Marido Tiene Familia opposite Daniel Arenas. She returned in the show’s second season. The actress, however, only had small appearances after its mid-run due to being pregnant.

The Mexican star who has over 4m Insta followers portrays the character of Juana Manuela in the Netflix 2021 series, The Five Juanas. In the show, Vega stars alongside stars like Sofia Engberg, Juanita Arias, Oka Giner, and Renata Notni.

Vega Is Married To A Cuban Actor With Children

In August 2013 Zuria Vega began dating Cuban actor Alberto Guerra. The husband and wife had their wedding at a ceremony in San Francisco, Nayarit, Mexico on November 22, 2014. Two years later on January 11, 2017, Vega gave birth to a girl named Lua. Then on May 20, 2019, the telenovela star gave birth to a boy named Luka.

In March 2021, she announced that she was expecting her third child with her star husband.

The Mar de Amor actress is also stepmother to her husband Penelope Guerra’s daughter from his previous relationship. Like her, Vega’s spouse is an actor, known for films like El Señor de los Cielos (2013), Ingobernable (2017) and La Jauría (2019).

Zuria started dating Guerra in July 2013. During a live Instagram q and a with fans, the husband revealed he chased Vega to his fullest will. Guerra also admits that he and the mother of his children are polar opposites. In 2019, the couple together starred in the film ‘Through the thick and thin’.

The actor couple has also declared that they do not plan to have any more children.

Her Husband Struggled With Alcohol And Drug Addiction

In Aug 2021, posting a black and white photograph on his Instagram, Vega’s husband celebrated that he has been sober for 36 months.

Vega herself reacted to the post writing “So proud (Very proud)” with several love emoticons.

When she was 18 years old, Gonzalo Vega’s daughter Zuria had a relationship with another Mexican actor, Jorge Poza, which though ended after three years. Allegedly the former couple had even planned a wedding.
The former couple in a joint statement said that they had decided to separate mutually. The ex-pair also cited the separation process was difficult yet they faced it and wanted their fans to know.

Vega is an easily distinguishable face in the Mexican entertainment industry. The mother of two has had appeared in more than 1200 episodes since her career began in the late 2000s. What’s more all of the shows she has been in, became a huge success with the audience and the critics alike.

That said, there should be no harm in saying Vega could be one of the highest-paying celebrities in the telenovelas world. Equally important to mention is her social media reach with millions of followers; the Hispanic actress must be gaining significantly with all her partnerships and brand promotions.

Some Other Facts About Vega