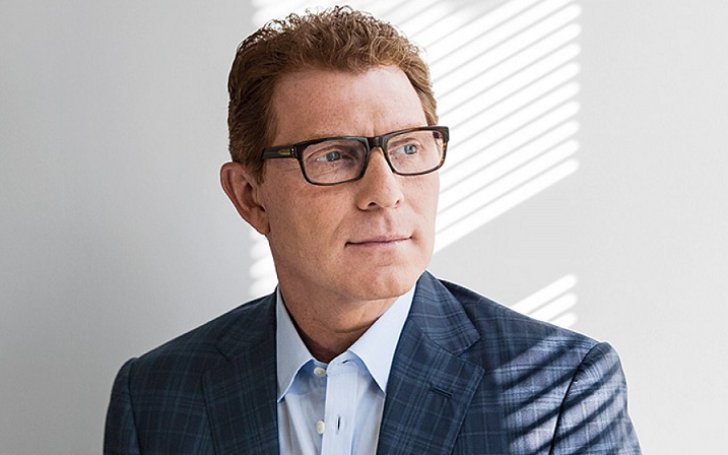 Bobby Flay is dominating the cooking world over the years, but things certainly seem to be a little daunting when it comes to his voyage in the love department. The most successful celebrity chef has already gone through three failed marriages but has yet to settle down with anyone.

Find out if Flay is dating anyone at present? Who is his girlfriend? Also, know about his past unsuccessful relationships with his wives.

Who is Bobby Flay dating 2021? Know About His Current Relationship Status

Flay doesn’t have a girlfriend at this moment. He has kept most part of his love life entirely private. So, anything about Flay’s dating life is hard to trace out.

Back in October 2019, The Nanny star Fran Drescher appeared on Beat Bobby Flay‘s episode where Drescher asked Flay about his love life,

“What’s your situation? You’re not wearing a wedding ring. You have a girlfriend?”

Fans who watched the episode also commented on his single status. One wrote, “Yesss he is single 😍😍😍”

“Best part of the episode is finding out Mr.flay is still single 😍”

So the things are quite pronounced that the famed TV personality relishes a single relationship status at present. But, Flay was in a relationship with Masters of Sex actress Helene Yorke in the past.

How Did Bobby Meet His Now Ex-Girlfriend Yorke? They both are the Basketball fans

Bobby Flay dated actress Helene Yorke for over a year. The culinary genius welcomed his girlfriend Helene and fellow chef Alex Guarnaschelli as judges to an episode of Beat Bobby Flay in May 2017. He also opened up that the two first met at Knick’s game in 2016 on the show.

“So I’m going to let you in on a little secret. Last season I went to a Knick game and I met Helene. Now we kind of date.”

Guarnaschelli asked, “You instantly hit it off?”

Bobby verified they immediately hit it off. The couple subsequently started appearing publically in various places flaunting their romance. In March of the year, they were seen together in the streets of New York.

His ex-bae Yorke also enjoyed plenty of food along with the world’s popular celebrity chef who is a proud owner of a number of popular restaurants.

Dedicating to their culinary adventures, the actress even created an Instagram account under the username @thehungriestgirlfriend. She had written on her bio “I’m dating a chef. I’m still hungry” but has now deleted every post from the account.

Flay and his previous girlfriend Yorke frequently appeared together eating a variety of special items in known restaurants like Cafe de la Esquina in Williamsburg, Mabel’s BBQ in Cleveland, and more.

They both are also huge fans of basketball especially they staunchly support Knick. The duo previously attended several of its games together.

They celebrated their one year anniversary in Feb 2017

Bobby posted a sweet selfie with his then-girlfriend Helene in the honor of their one-year anniversary on 11th Feb 2017.

“One year later … could not smile and laugh more in a 12 month span. @heleneyorke @thehungriestgirlfriend #happyanniversary” read her caption.

In early 2018, Helene also appeared on the video Bobby Flay vs. Bobby Flay: Breakfast Battle of the Century.

Fans began assuming that the two possibly got engaged when Helene shared a photo on Insta wearing an ill-fitted wedding ring in December 2017. She captioned it,

“Tried on Brooke’s wedding ring last night. Andy and I are VERY disappointed by the size of my sausage fingers”

After the funny post, the two never confirmed whether they ever got engaged. However, their romance slowly vanished from the spotlight without revealing any proper reason behind their breakup.

Flay’s ex-girlfriend Helene has now moved on with a mystery guy. Back in September 2019, the actress shared a photo kissing her unknown boyfriend while watching a Michigan football game.

Big snack had a lil’ shirt made 🥰 #GoBlue

There is nothing about the mystery man.

Flay and wife Debra Ponzek, a celebrity chef exchanged their vows on 11th May 1991, the classic NYC haunt, The Rainbow Room. Around 225 wedding guests attended the ceremony. The two honeymooned for a week in Anguilla.

They first met at a casual restaurant Miracle Grill, in the East Village in June 1990. After a few outings, the couple began dating and also got engaged in the same year.

They both are James Beard Award winners. Despite their common love for cooking and initial undeniable romance, things later started becoming a little bit complicated between the two. They divorced after two years of marriage in 1993.

Second marriage with Kate Connelly which also dissolved in divorce

Bobby for the second time went on to marry Kate Connelly on 1st October 1995. The couple organized their wedding ceremony at Bolo which was officiated by the dean of City University Law School in Queens, Kristin Booth Glen.

The first they met during Flay’s guest appearance on Robin Leach Talking Food show in January 1994. Kate co-hosted the show. They both were single at the time. After a few months of their relationship, they got engaged in the same year.

On April 16, 1996, the two welcomed their first child, a daughter, Sophie Flay, community journalist for ABC7. However, they went their separate ways in 1998.

Bobby Flay and Stephanie March‘s love story began after they came across in the early 2000s. During the time, the actress also got the chance to appear on the TV series Law & Order: Special Victims Unit.

Their first blind date was in Nobu in New York City. The two dated for over a year before they got engaged during Christmas 2003. He proposed his then future-wife March with a Center ice rink at Rockefeller Center.

Nonetheless, their relationship also didn’t last long and they separated in March 2015. Their divorce proceedings came to an end in July of the year.

Flay was reportedly involved in an extra-marital affair with his assistant Elyse Tirrell. The romance with his much younger lady also ruined his third marriage with March.

Besides, Bobby Flay was once romantically linked to Giada De Laurentiis, an Italian chef and cookbook author. But they never admitted the speculations.

Bobby Flay Wife & Marriages: An Insight Into His Unsuccessful Relationship