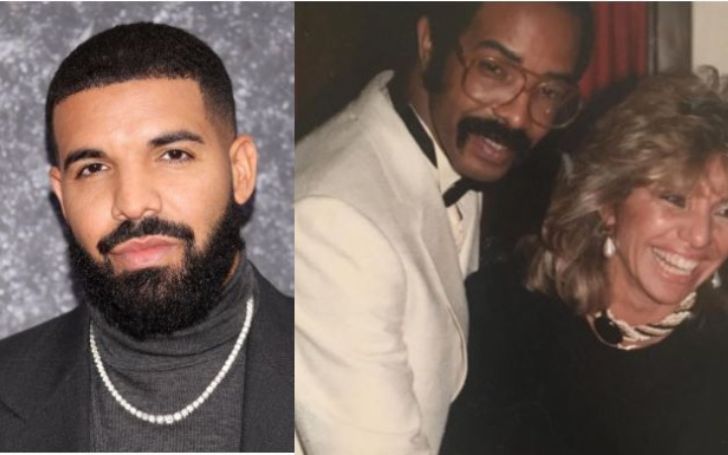 Drake, the Hot Line Bling singer doesn’t miss to praise or mention his parents. The Toronto-born singer has sufficiently featured his folks in his life.

Drake is one of the few artists who, for over half a decade now, has been able to give somewhat constant hits that appeal to both his rap, pop, and R&B fans. He is also one of just a handful of chart-toppers who have managed to successfully stream music to a devoted fan base without much promotion or with some expensive campaigns.

Drake is agreeably one of Hip-hop’s most beloved and buzzworthy figures. Attentions flocks to him pretty easily. Two figures, deliberately or otherwise, mentionable whenever Drake is in the discussion are his parents, Sandi and Dennis. Read their history and some unheard facts about Drake’s parents in the following headers.

Drake’s mom, Sandi Graham (nee Sher) who was born on January 28, 1960, was a teacher by profession. More precisely she used to be an English teacher and a florist.

The Champagne Papi’s mother reportedly used to be sick more often and she remained bedridden for most of her son’s childhood. She reportedly has been battling joint pain and osteoporosis for years.

Graham is of Ashkenazi Jewish (White) Canadian descent. While that makes Drake Jewish, the singer whilst talking to the Hollywood Reporter in Nov 2017 revealed although he identifies himself as Jewish and occasionally talks to God, he isn’t necessarily extremely religious. Drizzy however said he and his mother do the high holidays together.

Sandi apparently is one of the dearest people to Drake. The four-time Grammy-winning singer has dedicated several of his lyrics, songs, and social media posts to her.

Drake Father, Dennis Graham Is A Drummer From Memphis Tennessee

Drake’s father, Dennis Graham is African American. He is also a practicing Catholic in Memphis Tennessee.

Dennis hails from a musical family in Memphis. He was also a drummer for artist Jerry Lee Lewis at one point. However, according to the Hollywood Reporter, Dennis is also originally from Toronto; he just relocated to Memphis after having spent some formative years in Canada.

Although Dennis isn’t as famous as his Billboard topper son, the musician dad is still a man of many talents. He has drummed with many veteran talents. Drake’s father is also a TV producer. Billboard reports, Dennis’ uncle was Willie Mitchell, a producer who worked for the Memphis soul label Hi Records Records and Al Green. He also had a cousin, Teenie Hodges, who collaborated with Green. Similar to Drake, Dennis, too, had a single mother who raised him mostly by herself.

Drake Parents Sandi And Dennis Started Their Relationship In The 80s

Dennis and Sandi met during the 80s when the former moved to Toronto. They laid eyes on each other at a nightclub called Club Bluenote. It however is unclear when the ex-couple tied the knot.

The former couple welcomed their son, Drake on Oct 24th, 1986, in Toronto. Dennis and Sandi divorced when their only son Drake was five. After the separation, Drake stayed with his mother in Toronto while his father returned to Memphis.

Drake Parents Were Poor When He Was Growing Up

Drake in an interview with Complex in June 2022 said he wasn’t in a happy home while growing up. He added his mother was always sick and that they were very poor, “like broke.”

Everybody thinks I went to some private school and my family was rich. Maybe it’s my fault. Maybe I haven’t talked enough about it, but I didn’t grow up happy.

Drake initially spent his early childhood a few miles away from a high rise in the ethnically diverse West End neighborhood in Toronto. He later moved with his single mother, Sandi to Forest Hill. It was the city’s most affluent area. It was also the place where the Juno Awards winner had his bar mitzvah.

Drake in an interview said he went to school with kids that were flying private jets and that he never fit in those circumstances or that they never accepted him.

His Mother Almost Abandoned Her son

When Drake and his mother, Sandi were struggling financially, the latter, out of desperation, almost left her son and ran away. The Canadian artist has referred to this period in one of his songs, titled Successful. In 2009, during an interview explaining what had happened Drake said,

“When I was going through the creative process for So Far Gone, I was actually at a pretty dark place in my life.”

The R&B celebrity added it was also the time when his grandmother’s health was deteriorating which was hard for his mother Sandi to watch. At the time, Drake was also having second thoughts about his music career.

The AC Milan shareholder said it was a tough time financially which was years after Degrassi. According to the highest-certified digital singles artist it eventually became too much for his mother and one night she broke down and tried to run away from the house.

[She] tried to leave it all behind.

said the son of Sandi and Dennis.

Drake revealed his mother was just sitting in his car as he approached it looking for something he had forgotten. The singer then happened to stumble upon his mother in the driver’s seat. The two then looked at each other after which Sandi just started crying.

In Nov 2011, when giving an interview with Complex, Drake recounted a major operation that his mother had to go through. The singer revealed his mother’s head was drifting away from her spine. Fortunately, however, the doctors were able to adjust it. Drake later announced the news of the operation being successful.

He also revealed how his mother was moving better than ever. Post the surgery, Sandi’s son sent her on a vacation in Italy. The artist’s mother, at the time, hadn’t taken a holiday in 22 years. During the operation, Drake also canceled his European tour.

Drake Relationship With Parents; Didn’t Have It Good With His Father

As mentioned Drake has an unconditional love for Sandi. The now 36 years old singer often pays tribute to his mom in his songs and in interviews. Drake says his mother is an incredible woman. He claims to have her full support for ‘whatever he does or whenever he ends up.’

While Drake has a loving relationship with his mother, the two Brit Award-winning singer claims his father, Dennis was a rather absentee parent. The artist’s father however in his defense has said that his son was just making that up to sell his records. In response, Drake later went to his Instagram and said that his dad would say anything to anyone “that’s willing to listen to him.”

In the past, Drake and his father had entangled them in a bit of an internet feud with each of them throwing several accusations at the other. However, the partial estrangement now seems to be over as the pair in recent years have appeared alongside each other at a few or two public gatherings.

In fact, in recent years, Drake has also included the dynamic of his and his father’s relationship in a few of his songs, eg From Time. He also often banters with his old man on Instagram or his other social media platforms.

Although Drake is a child from an interracial relationship, the songwriter identifies himself to be more of a black man. In his biography, Drake states he is more immersed in black culture than any other though his Jewish ethnicity, to him, is a cool twist.

When Dennis was in Memphis, he also served many years on drug-related charges. In fact, he was in and out of Drake’s life due to his occasional prison times. This was after he divorced Drake’s mother, Sandi. Dennis apparently involved himself in selling drugs because of insufficient funds.

After Dennis freed himself from wrong paths and jail time, he got to spend a lot of time with his son, Drake. In Feb 2019 Dennis told Variety that he and Drake would take long car rides between Toronto and Memphis and share music.

The father and the son now appear together in various projects. One such instance is a commercial video for Virginia Black, an American Bourbon whiskey brand. Dennis admittedly also asks for his son’s feedback for several of his projects.