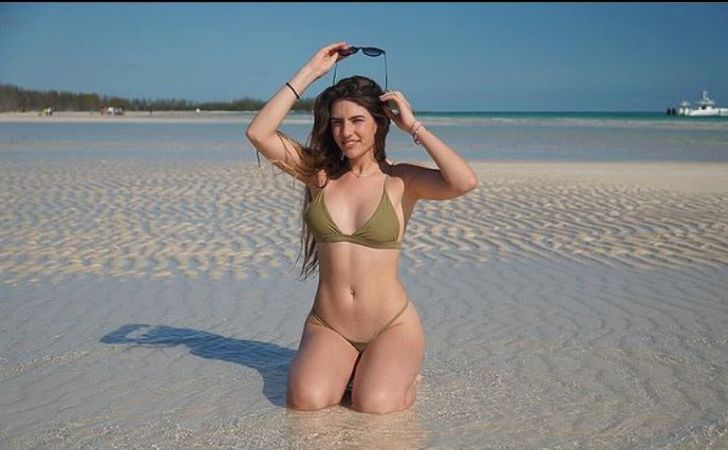 Dusti Rain Van Winkle is the oldest daughter of American rapper Vanilla Ice. But unlike her father, she is not into music but is a Model Spokesperson at Biltmore Technologies. She is just in her early 20s and has already gained wide fame and the credit primarily goes to her father.

Further, she also shares a great relationship with her parents. But what about her love life? Is she dating a boyfriend? In this article, we will cover both her personal and professional life. We will also find out her net worth in 2022.

Let’s dive in together.

Dusti Rain Van Winkle Is The Daughter Of Vanilla Ice

Like we said Dusti Rain Van Winkle is the daughter of American rapper, singer, and songwriter Vanilla Ice and his wife Laura Giaritta. She was born on September 4, 1998, in the United States.

Despite being born in a celebrity family, she has a very humble childhood. She had a great childhood besides all the controversies surrounding her father.

Talking about her siblings, she has a younger sister KeeLee Breeze Van Winkle, who is around 2 years younger than her. Needless to say, she shares a great relationship with her sister as well. They often appear together on one another social media posts.

As one can expect, Dusti Rain has a strong academic background. After finishing her schooling, she attended Full Sail University, where she graduated with a bachelor’s degree in Entertainment Business.

Though Dusti was pretty much exposed to the music industry, she did not develop much interest in the profession. She is rather making full use of her college degree in the entertainment business.

Since September 2015, she has been working as a Model Spokesperson at Biltmore Technologies, Inc. Besides, she is also a realtor as per her Instagram bio, and has made a few investments in real estate.

Is Dusti Rain a Model By Profession?

Well, she is not a professional model, but she enjoys posing at beaches. In fact, she really pulls off all kinds of poses with equal ease. She has also posted numerous photos of herself flaunting her bikini body.

Not many know, but Vanilla Ice’s daughter Dusti is in a romantic relationship at present. She is dating her boyfriend named J Kyle Christoffers, a guy from Palm Beach Florida.

Though they have not revealed the exact date they began dating, they are apparently together for a couple of years now. Dusti first made her relationship with her boyfriend public via an Instagram story in 2018. In the post, she is seen kissing Kyle.

Later, she again shared a photo of her boyfriend on her Insta story on occasion on national boyfriend day. Ever since she has been pretty vocal about her relationship.

Who is Dusti’s Father Vanilla Ice?

Like we said earlier, Dusti’s father Robert Matthew Van Winkle, professionally known as Vanilla Ice is an American rapper, actor, and TV host as well. Beginning with his debut album Hooked in 1989, he has released numerous successful albums so far.

Some of his most successful albums include To the Extreme, Ice Ice Baby, Hard to Swallow, WTF – Wisdom, Tenacity & Focus, and much more.

Likewise, he made his film debut with Teenage Mutant Ninja Turtles II: The Secret of the Ooze in 1989. Following his debut, he has appeared in many movies like Da Hip Hop Witch, Big Money Rustlas, That’s My Boy, and much more.

Her Parents Are No More Together

Unfortunately, Dusti Rain Van Winkle’s father Vanilla, and mother Laura are no more together. They were married on March 30, 1997, at Star Island mansion in Miami Beach.

However, almost 20 years into marriage, Laura filed for a divorce from her ex-husband in Palm Beach County in 2016. She referred to her marriage to be “irretrievably broken” in the divorce documents. Their divorce was finalized in November 2019.

Dusti Is On Social Media

Like any celebrity kid, Dusti is a big fan of social media. She is not only on Instagram but also on Twitter. She loves posting on her Instagram and we can pretty much get insight into her personal life via her posts.

How much Is Dusti’s Net Worth?

As a realtor and spokesperson, she makes a decent sum of money. However, she has not exactly revealed her net worth in 2022. On the other hand, her father has a net worth of around $12 million.