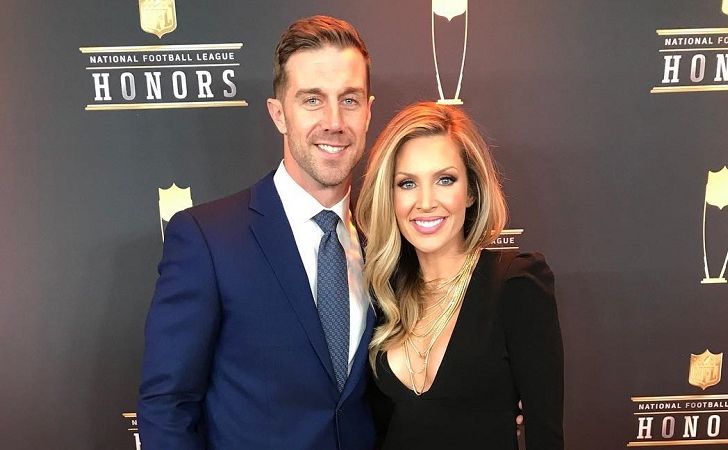 Elizabeth Barry, a cheerleader of Raiders (former), is widely recognized across the world. But her fame is not just because of her career but also because of her famous husband Alex Smith. Elizabeth is the wife of American football quarterback Alex Smith. Though the cheerleader’s marriage with Smith began with a coincidence, they lead a beautiful relationship as a present.

Elizabeth Barry Cheerleader, as they recognize her, also has three children from her marital relationship. But how is her relationship with Alex? When did they get married?

Besides, also find out about Elizabeth’s career, parents, and other details.

One of the four siblings, Barry has three older brothers, one being Tim Barry. Well, like any kids, the siblings share quite a bond. On April 11, 2014, she even made a post of her brother on her Instagram.

Apparently it’s national sibling day.. Shout out to these cuties!! Wish I had more pics. Still missing one😁 #bigbrothers

How Old Is Elizabeth Barry?

She Is The Former Oakland Raiders Cheerleader

Before getting married to NFL player Alex Smith, Elizabeth worked as the cheerleader of the Oakland Raiders. Well, football happened to be the common ground for making the couple’s meeting possible.

The couple met back when Alex played as the quarterback of the San Francisco 49ers. Shortly after the meeting, they began dating.

Do you believe it? A few things in life are destined!

As per the reports by ESPN, the beautiful Elizabeth and Alex went on their first date at a St. Patrick’s Day Festival in San Jose, California.

They also enjoyed dinner together. Alex’s best friend Andre Dabagghian, who reportedly committed suicide in 2008, also joined them on their first meeting.

Not all love affairs reach the point of marriage, but Elizabeth and Alex’s did. Shortly after the beginning of the relationship, they got engaged in 2007.

Two years after their engagement, Elizabeth and Alex married on February 21, 2009, at San Francisco’s Palace Hotel. The couple has now been together for over 11 years and their romance seems as fresh as ever.

On the occasion of their 10 marriage anniversary, Elizabeth also made a post on her Instagram, explaining their decade-long journey.

No doubt, the husband and wife seem to be getting stronger every passing day.

Paid Tribute to Alex’s Friend Andre on Their Wedding Day

Alex’s best friend Andre committed suicide during training camp in 2008. Well, in honor of him and Elizabeth’s uncle who also happened to die around the same time, Alex paid tribute on their wedding day.

Elizabeth Has Three Children With Her Husband

36 years old Elizabeth is the mother of 3 children with her husband, two sons, and a daughter. Their first child, Hudson, was born on May 11, 2011, after two years of their wedding.

The mother of three, Barry often posts photos of her children on her Instagram and seems quite fond of her kids like any mother.

The family of five currently resides in Kansas City. Elizabeth and Alex moved to Kansas after the San Francisco 49ers traded Smith to the Chiefs during the 2012 season. They have since settled down in Kansas.

The Husband And Wife Are Active Philanthropists

Both Elizabeth and her husband Alex are in philanthropy. In fact, they are actively working against domestic violence. As of 2020, the couple works with the Hope House, where they combinedly make efforts to prevent domestic violence.

Hope House is a Kansas City-based organization working against the cause. On the official website of the Hope House, it has clearly mentioned its mission to eradicate domestic violence and change the protect the right of people.

break the cycle of domestic violence by providing safe refuge and supportive services that educate and empower those impacted by domestic violence. Hope House will advocate social change that protects and engenders a person’s right to live a life free of abuse.