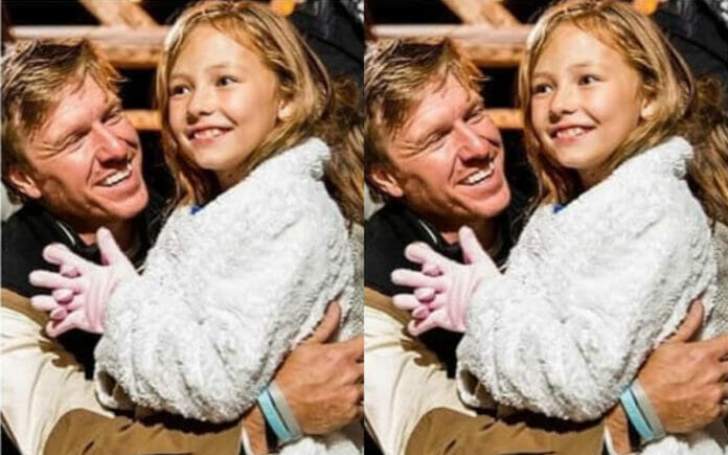 Ella Rose Gaines is a celeb kid famously known as the elder daughter of television presenter, author, entrepreneur, and interior designer Joanna Gaines. Her mother Joanna is mostly recognized as the former star and the host of the HGTV reality TV show Upper Fixer, a series about home design and renovation.

Not only Ella’s mom but her father Chip Gaines is also known for his appearance in the popular HGTV series Fixer Upper. Both her parents, the husband-wife duo showed up in the show from 2013 to 2018 and were admired by audiences. Being the child of such loved TV personalities, it is obvious that people want to know about her too.

So, we are here today to talk about the inside and outside life of Joanna and Chip Gaines’s first daughter Ella Rose Gaines.

Ella Rose Gaines Is The Daughter Of Joanna Gaines

The beautiful Ella was born on October 19, 20o6, in the United States of America. Moving further, she has a birth sign Libra. Likewise, Rose grew up in her hometown in a very loving and creative environment built by her famous parents.

As of 2022, Ella is 16 and she celebrated her 16th birthday pretty beautifully. On the auspicious occasion, her mother Joanna poured her joy into words and captioned it on her Instagram on October 19, 2022. She wrote,

My sweet girl turns 16. I’m trying my darnedest not to cry like a big fat mama baby when she drives off by herself tomorrow 🥹

Besides, Gaines is an American citizen and belongs to a white ethnical background.

She has got a normal height that a 16-year-old child generally has. On the other side, her father Chip stands a height of 5 feet and 10 inches while her mother Joanna is 5 feet and 7 inches.

Are Duke And Ella Twins?

As we found out that many of you are interested to know whether Ella was born twins to her brother Duke. So, we would like to say that Duke and Ella are not twins rather Ella is a big sister to her sibling Duke. The two have a two-year age gap, Ella was born in 2006 while Duke on 2008 which is already mentioned above.

Her parents, Joanna and Chip are considered one of the most adorable couples in the American entertainment industry. So far, the couple has been successfully leading their married life for nearly two decades. The husband and wife tied the knot on May 31, 2003, in the Earle Harrison House in Waco.

Though their journey as a married couple started in 2003, the couple is together since 2001. In 2001, the Gaines couple started dating and after a year in 2002, they got engaged and then got married.

A 16 years old celebrity child has a huge interest in designing. Her mother keeps sharing her work as a creator and designer on her social media account. 6 years back, when Ella was just 10 years old kid, she had this discussion with her mother about becoming a designer.

She created all of these colors from scratch today! My little design bud at work 😍 #teamella

Not only this, but Ella has also worked as a creator in her mom’s book The Stories We Tell: Every Piece of Your Story Matters. On September 19, 2022, her beautiful mommy wrote on her Instagram,

I loved the whole process of bringing this book to life—but having my daughter, Ella, help design the cover with the creative team was the very best part of it all. ❤️ #TheStoriesWeTell

At a very young age, she is really doing a lot and is already enthusiastic about paving her path in the creative field.

Joanna and Chip’s teenage girl is interested in many other things. While growing up, she learned numerous other skills from her parents and picked up some of them as her hobbies.

As time passed, she showed up with multiple interests in front of her parents which is why her mother once told People,

“I think she’ll follow in my footsteps and have her hand in a lot of things,”

“Right now she wants to cook, be a lead designer and have a donut truck,”

Additionally, her father Chip also stated that she also enjoys photography and once uploaded the photo clicked by his daughter on his Instagram. We must say, Ella is quite a good photographer.

Ella Rosa Gaines Is Skilled In Sewing And Baking

As we said earlier, her mom once stated that Ella could try her hands at many things. In this case, her mother was absolutely right. Besides being creative, she is equally skilled in Sewing.

Actually, at a very early age, she took a sewing class along with her sister. Her mom has shared about it on her Insta page on April 9, 2016. She wrote,

The girls have been taking sewing lessons for a year now and for the last few weeks they have been talking about a surprise they are making. They finally finished this week and I just love this quilt and so do their “students” they are reading to! Hello weekend, I’m thankful for you.

Her talent does not end here. She also knows how to make dishes in a bakery. Once her mom wrote on her social media about her bakery business which stated,

“Her new summer business is selling baked goods at the office when she goes to work with me,

“Tonight we stayed up late and she made Aunt Opal’s banana pudding and the chocolate chip cookies from my cookbook.”

And she finally said,

“She’s going to make a heck of a business woman!”

Absolutely, as her mother said, she is going to be a great entrepreneur. The one who has knowledge in so many things obviously makes a great life for herself.

As per her father, Rosa is a very thoughtful and caring child. On April 2, 2019, her dad shared a post on his Instagram that include Ella’s written words for her Mother. The words were like this:

Mom! I love you so much! I hope you have an amazing day! You are such a hard worker! Love You. -Ella

Seeing these words, her mom probably has got emotional like her father. Sharing his small daughter’s sticky note on his Instagram, he wrote a caption,

Our sweet and thoughtful Ella Rose.. This made my day so I KNOW it made @joannagaines!

Talking about her social media presence, she does not seem to have her account in any handles. Since a small age, she has developed an interest in multiple things like gardening, baking, sewing, designing, and others. So, she is probably more occupied by this work rather than being busy on social media. However, we can see her beautiful moments on her mom’s and dad’s social media accounts.

Though Ella is actively working, her working area is tied to her home only. She hasn’t started professionally. So, her net worth is yet to be estimated. On the other side, her mother has a net worth of $50 million.