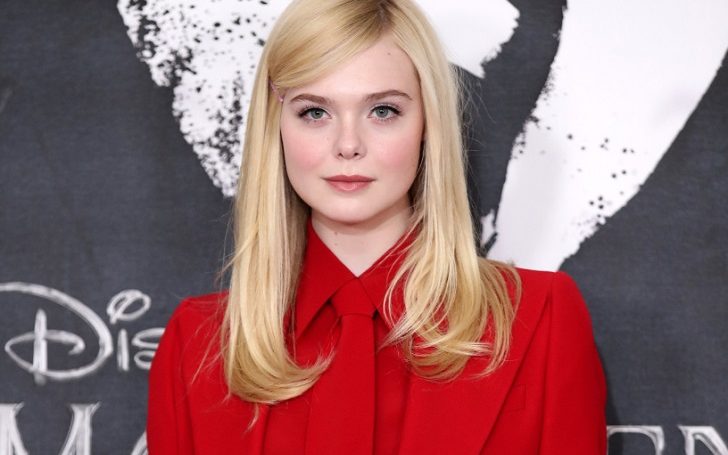 Dabbling into the world of acting from the age of three, Elle Fanning has since worked in plenty of hard-hitting movies and TV shows. The young actress gained critical praise for her breakout role in the movie Super 8 (2011).

Elle gained further acclaim with a role in films like Maleficent (2014) and its sequel Maleficent: Mistress of Evil (2019).

Who Are Elle Fanning Parents?

Fanning is the daughter of Steven Fanning (father) and Heather Joy Arrington (mother). Steven named her Elle and Heather called her Mary. Thus, her birth name is Mary Elle Fanning.

Elle has a close relationship with both of her parents. On 16th July 2019, the actress also wished her mom on the occasion of her birthday.

If you look up “mom” in the dictionary your picture would be right there. You epitomize everything a mother should be and more! Happy🌸🧁🌸Birthday🧁🌸🧁Mommy🌸🧁🌸 I love you doesn’t even come close to how I feel about you.

Besides, Elle is an American by nationality and belongs to mixed ethnical background. She is of German, Irish, English, and French ancestry.

Grew Up In a Family of Sports Star

Elle’s dad Steven previously played minor league baseball and now is an electronics salesman in Los Angeles. While talking about her mummy Heather who is a former tennis player.

On the other side, Fanning’s maternal grandfather Rick Arrington is also an erstwhile American football player.

Grandmother Once Paid $600 To Buy Her An Old Cream Container

As a child, Elle was also pretty much close to her grandmother Katharina Fanning. Katharina once spent $600 at bedding to acquire an old cream container for Elle. It was previously possessed by late American actress Marilyn Monroe.

Fanning is the younger sister of Dakota Fanning, an actress. Her older sister first grabbed attention at age 7 with her breakthrough performance in the drama movie I Am Sam (2001).

Dakota’s role in a film also brought her Screen Actors Guild Award nomination at age of eight, becoming the youngest actress who has ever nominated in SAG history.

Here Are Some Interest Facts about the Fanning Sisters

Elle Fanning Was Home-Schooled Until the Age 9

Fanning was home-schooled until 2007. In the 4th grade, Elle joined Campbell Hall School, a private K-12 Episcopal day school in Los Angeles. On June 13, 2016, Elle graduated from the school.

Around that time, Fanning also became the cheerleader of the school.

Embarked on Acting At Age of Three

Elle Fanning landed her first acting gig with the role of Young Lucy Dawson in the movie I Am Sam (2001) at age three. She shared the screen along with her older sister Dakota in the film.

A year after, the then-child actress also made a TV debut appearing in a miniseries Taken. Subsequently. other projects quickly followed like Because of Winn-Dixie (2005) and Babel (2006).

Made Breakthrough With the 2011 Film ‘Super 8’: Continued Success

Fanning gained wide recognition with the iconic role of Alice Dainard in a block-buster movie Super 8 (2011). She also won a Spotlight Award for her work on the project.

In the next few years, Elle became part of many other major successful movies that include We Bought a Zoo (2011) and Ginger & Rosa (2012). Her other major break came when the actress played Aurora in a commercially hit movie Maleficent in 2014. The movie starred Angelina Jolie, Sharlto Copley, and more.

In 2019, Fanning also appeared in its sequel Maleficent: Mistress of Evil. The following year, she went on to appear in two other big projects The Roads Not Taken and All the Bright Places.

Prior to her work in movies, Elle Fanning is also credited for her work in many high-profile television projects. She portrayed Tracy Belle in Criminal Minds (2006-07).

Furthermore, Elle also appeared in HitRecord on TV in 2014. She acted in The Disney Family Singalong and The Great in 2020.

What is Elle Fanning Net Worth?

Elle Fanning has a $5 million net worth. The actress has earned such good fortune through her movies and TV roles.

Is Elle Fanning Dating Anyone in 2021? Who is Her Boyfriend?

Fanning is currently dating filmmaker boyfriend Max Minghella. The two met for the first time while they were filming the musical drama Teen Spirit (2018) in early mid-2017.

On 13th July 2017, Max also shared the first photo of his then future-girlfriend Elle on his Insta.

They Shoot Horses, Don't They? #teenspiritmovie

Their dating rumors sparked when the two were seen together in London in August 2018. The couple did shopping together and Fanning bought a Louis Vuitton New Wave chain bag.

The duo made again headlines when they attended the re-opening of Phoebe Waller-Bridge’s one-woman stage version of Fleabag at the English capital’s Wyndham Theater together in August 2019.

Aven after their frequent public appearances, the two still remain quite secretive about romance.

Elle Fanning Break-up at Age of 16

In an interview with Marie Claire, Elle Fanning opened up about a heartbreak she experienced after her split with her first beau at age 16.

She told, “At that age, I was experiencing first love…not to get into it too much, but it was also…not the best…It was kind of a tumultuous relationship. Which can also be very romantic for young people as well. Everything’s so dramatic at that age, so intensified, when you’re young and still developing in a school setting, which is literally the harshest place in the world.”

All About Elle Fanning Boyfriends: Rumors About Her Pregnancy, & More