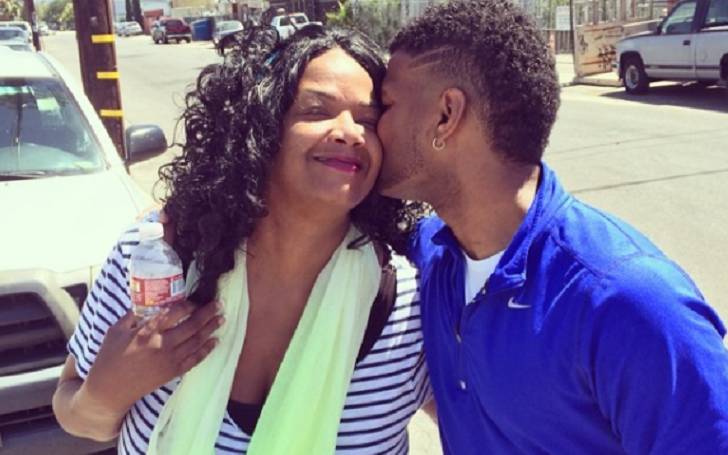 Elvira Wayans is a screenwriter by profession but rose to stardom being a member of the prolific Wayans family. It consists of several well-known stars such as Marlon Wayans, Keenen Ivory Wayans, and Dwayne Wayans.

Elvira is also a mother of two children. Both of them are involved in the entertainment business. Today, in this article, we are talking in detail about her personal life, including her marital status and past relationships.

In the meantime, let’s also take a look at her current relationship status.

Who Are Elvira Wayans Parents? Mother Died at 81

Elvira Wayans is one of ten children of Elvira Alethia, a social worker, and Howell Stouten Wayans. Her father used to work as a supermarket manager.

Sadly, her mother Elvira, the matriarch of the Wayans clan passed away in mid-2020. She was 81-year-old at the time of her demise. Her late mom resided in Chelsea, New York City.

“Losing you shattered me into 1000 pieces I’m putting myself back together piece by piece. You will always be my glue. Miss you. Today i celebrate for the both of. In the midst of this hurt… i just love you ma.”

According to TMZ, Elvira died a couple of weeks ago but the reason behind her demise is still unclear.

Elvira was born Elvira A Wayans on January 4, 1964, in New York City, the United States. Her age is 58 as of 2022. Celebrating her 56th birthday, her daughter Chaunte posted a sweet throwback photo with her mom.

Wayans grew up in NYC along with her big family. However, further information about her childhood and academic achievements remains a mystery.

The NYC native has five brothers and four sisters. All of them are doing a superb job professionally and personally. Take a closer look at her siblings’ life!

He is one of the most successful Wayans brothers. The man of all seasons, Marlon has built a highly successful path in several major fields like acting, writing, producing, and comedy. He kick-started his journey in the entertainment world by appearing in I’m Gonna Git You Sucka (1988).

He grabbed worldwide popularity after his work on the WB sitcom, The Wayans Bros. His other successful projects include G.I. Joe: The Rise of Cobra (2009) and The Heat (2013).

Like his brother, Keenen is also a successful actor, comedian, and filmmaker. He began his career playing the comic role in the 1983 drama Star 80. He subsequently appeared in successful projects like Happily Divorced, Little Man, and Dance Flick.

Over the past several years, Damon also has worked in dozens of successful movies and TV shows like In Living Color. His breakthrough role came in the comedy TV series Lethal Weapon (2016-19).

Dwayne was born on 22nd August 1956, in New York City. He is a film score composer by profession. Dwayne also has tried his hands in the writing field. His film works include Dance Flick, Underground, and Little Man.

Born and raised in New York City, Shawn graduated from the Bayard Rustin High School. The talented entertainer scored his first on-screen role in the film I’m Gonna Git You Sucka in 1988. He is also credited for his work on films like New Blood, and Scary Movie.

Kim is an actress and comedian. She came into the limelight following her role on the Fox acclaimed comedy show In Living Color. She is also best known for her work In the House and New Girl.

Diedre is a producer and screenwriter by profession. She worked on the show called “My Wife and Kids”. Additionally, she has also been involved in philanthropic works. She is the founder of a charity organization called Wayans Girl Foundation.

Besides, Elvira’s sister Nadia is also reportedly involved in the show business.

According to some online sources, Elvira is married but there is no more information about her marital relationship and husband. She has kept all her personal detail out of the public eye.

She Is a Mother of Two Children: Who Is Their Father?

Elvira has a son Damien Dante Wayans and a daughter named Chaunté Wayans. Her first child, Damien was born on April 29, 1980. She gave birth to her second child, a girl Chaunte on May 24, 1982. However, the detail of their biological father is yet to be revealed.

Chaunte never wanted to be in the entertainment business and initially started off in computer science. She also went to Seton Hall for a semester. Despite all that, she eventually worked on a few acting projects such as Trading Spaces, Dance Flick, and more.

On the other hand, Elvira’s son Damien is also an actor who began his acting career with a role in Eddie Murphy Raw at 7. He has also worked as a writer, producer, and director on several projects.

She currently resides in Charlotte, North Carolina with her two children.

Elvira’s net worth stands at $100,000 in 2022. Besides, all of her brothers also have racked a considerable fortune. Damon’s estimated net worth is $35 million.