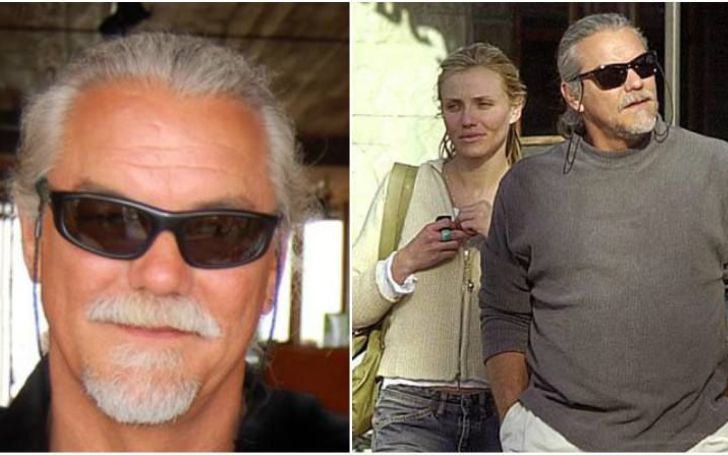 Emilio Diaz is famous for being the father of an American actress, author, and former model Cameron Diaz. His daughter Cameron is one of the world’s most bankable actresses popular for her role in movies like Any Given Sunday, and Being John Malkovich.

Besides being the celebrity father, he himself is a former foreman of the California oil company Unocal. Moreover,  he was also an actor who portrayed a small role in the 1998 movie, There’s Something About Mary. Despite showing capability as an actor in his first ever movie, his acting career couldn’t take a gear towards success and remained limited.

So, today we are going to talk about the same person Emilio who tried to pursue his career in acting alike his daughter. Furthermore, the article will explore the life details of Emilio Diaz alongside his wiki, family, his grave, and his cause of death.

Cameron Diaz’s Father, Emilio was A California Native: His Ancestry

Emilio was born ‘Emilio Luis Diaz’ on the 3rd of July, 1949 in Los Angeles County, California USA. He is the only son of Emilio Diaz Sr. and Mary Diaz. He has four sisters, Sara, Adriana, Virginia, and Yolanda, and one step-brother, Frank Garcia.

However, his ancestry wasn’t from California. Emilio’s family is originally Cuban and shifted from Spain to Cuba. Besides, he belonged to the Cuban-American ethnicity and had American nationality.

In the same way, prior to his birth, his ancestors again shifted and settled in Ybor City, Tampa, Florida. And later they moved to the Los Angeles area where Emilio was born. Just like the majority of children in the world, Emilio had a very ordinary upbringing and spent a major part of his life in his native land, California.

Emilio Diaz’s Professional Career: What Did He Do For A Living?

Talking about his profession, Cameron’s daddy, Emilio was an employee in the California Oil Company Unocal, a major petroleum explorer, and marketer. He worked there as a foreman, and a field gauger in the pipeline department for more than 20 years.

In fact, he served the oil company California until his retirement. It was the year 1998 when his tenure was completed and he took a leave from his work.

Emilio was An Actor Too

After his retirement, Emilio appeared as an actor in the movie named, There’s Something About Mary. It was a romantic comedy movie where Diaz portrayed the minor character of Jailbird.

In the movie, his famous daughter Cameron starred as a title character alongside other actors like Ben Stiller and Matt Dillon.

Emilio Diaz’s Family Life: To Whom He Was Married?

Diaz without any doubt was a family man. On 1st March 1969, he shared vows with the love of his life Billie Joann Early who was an import/export agent at the time.

As per some sources, the duo was in a relationship for a long period before getting married. Apart from this, there are no details to tell further about their love life and wedding Ceremony.

However, as a matter of fact, the husband-wife duo was on good terms as the couple spent 39 years of their life with each other. And their togetherness parted only after Emilio’s demise. In their more than three-decade marriage, the couple shared three children together.

With his spouse Billie, Emilio has two daughters named Chimene Diaz and Cameron Diaz. Moreover, he also has a son named Michael Daiz.

As per reports, his son is assumed to be the eldest among his 3 children but his date of birth and profession is out of media. Likewise, his first daughter Chimene was born on June 5, 1970. By profession, she is an assistant in Skinny Chick Inc. as per her LinkedIn account.

Further, Emilio’s youngest daughter Cameron is a well-known actress in the American entertainment Industry. Before, moving forward, let’s have a short bio on his famous child.

Born on August 30, 1972, Cameron started her career by signing a modeling contract with Elite Model Management when she was still in high school. Eventually, she became an actress in the year 1994 after debuting in the movie, The Mask. In the movie, she worked alongside Jim Carrey.

After that, she appeared in several movies like My Best Freind’s Wedding, There’s Something About Mary, The Holiday, and many more. For her incredible performances, the actress got a nomination for the awards like Golden Globe, BAFTA, and others. Simultaneously, in the year 2013, Emilio’s daughter, Cameron was even named the highest-paid actress over 40.

Emilio Diaz Died At The Age of 58: Know The Cause Of His Death

As we all know, death is inevitable in life and sometimes it comes in a sudden way that a family finds it difficult to cope with the loss of loved ones. The same thing happened to Emilio and his family when Diaz suddenly passed away on April 15, 2008, in Seal Beach, California.

Apparently, the Cuban-American Diaz was battling flu which later became pneumonia that further deteriorated his health condition. In medical terms, the disease Emilio suffered was called post-influenza MRSA pneumonia which cruelly took the life of the 58-year-old, leaving his family numb and broken.

There are no factual details on where Diaz’s grave actually lies but we can say with certainty that his grave lies somewhere in California, near his home place.

Speaking of his funeral rituals, Emilio’s family did it in a little different way. Instead of flowers, the family asked all the mourners to instead donate to the conservation foundations, Surfrider.org and Reefcheck.org. Both organizations work to protect the beaches and oceans.

Similarly, all of the people who attended the cremations wore Hawaiian shirts, sunglasses, and leis, a direct tribute to Emilio, who had a laidback personality.

Emilio Diaz’s Family Remember Him As An Humorous Being

The sudden death of Emilio left his wife and his children shocked. However, after his death, they couldn’t stop themselves from talking about the jolly and happy nature of their demised loved one. His family in an exclusive talk with People stated,

“His love for laughter was undeniable and he embraced life head-on in such a dynamic way that he was impossible to forget,”

Further, they stated, “He also “loved to share his love through laughter”.

Moreover, in remembrance of her late father Emilio, Cameron wrote, “My dad was loved by so many people, and his humor and spirit will always live on in our hearts.”

Was Emilio Diaz’s Net Worth Estimated?

As of 2022, it’s already been 14 years since Emilio left the world so, his net worth is not available on any of the sites. On the other hand, his famous daughter, Cameron has an estimated net worth of $140 million which she gained from her acting career.