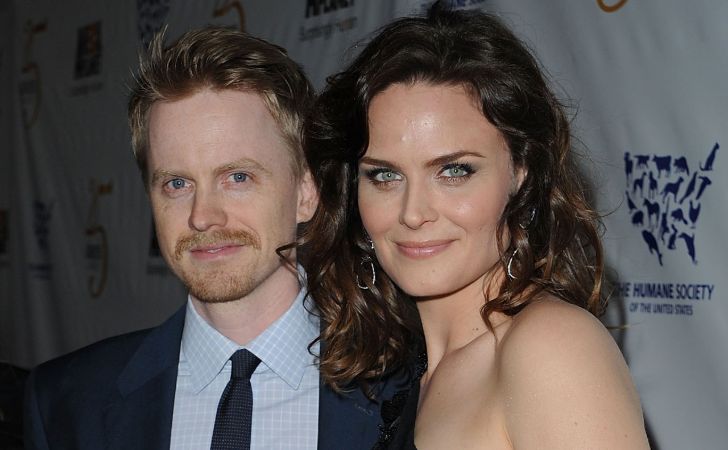 After exceptional performances in the series, Bones, Emily Deschanel has definitely made a huge fan-following. Aside from her professional life, her fans are keen on knowing about her personal life.

She is a married woman. Apparently, she dated her hubby for a few years before deciding to marry him. What’s more, she also shares two kids with her husband. It is safe to say, life has been blissful for the actress.

But the big question is, who is Emily Deschanel’s husband? A little hint, her spouse is also involved in the entertainment field.

Without further ado let’s find out about her husband and take a look at her personal life.

Who is Emily Deschanel’s husband? When did they marry?

Since 2010, Emily is happily married to David Hornsby. The lovebirds walked down the aisle on September 25, 2010, in a super-private ceremony. The holy matrimonial took place in Pacific Palisades, Los Angeles.

Back then, news of her wedding took many of us by surprise. There was no initial announcement by the pair because of which fans were not expecting any nuptials soon.

The duo invited many of their close friends and family. There were a few stars at the wedding as well, including her Bones co-star David Boreanaz who arrived with his wife and son. In addition, her sister Zooey also brought her now ex-husband, Ben Gibbard.

Talking about the bride and grooms’ wedding dress, the duo kept it largely simple. She wore a skin color gown and her husband a dark blue suit with a white shirt. Moreover, Emily also wore 10-carat diamond earrings alongside two platinum-and-diamond scroll hairpins.

If two stars from the entertainment industry tie the knot, it becomes much harder to keep the relationship behind closed doors. However, Emily Deschanel here is an exception. Although she has shared the most important details about her personal life, she also manages to keep it secretive as well.

Emily Deschanel and her partner are a parent of two children

The couple became a parent for the first time on September 21, 2011. She gave birth to a baby boy and named him Henry Lamar Hornsby. When her firstborn came into this world. Emily’s sister Zooey Deschanel took to Twitter to congratulate her sister. She wrote, “I am super excited to be an aunt!”

An interesting fact, during her first pregnancy, Emily also followed a vegan diet.

On 8th June 2015, they became parents for the second time and welcomed yet another boy, Calvin Hornsby. A rep for the duo confirmed the news at the time.

Besides, both of her pregnancies were written into the Bones script because of which she didn’t have to hide it. The family of four is living a happy life and both Emily and David are quite content with their lives.

How did Emily first meet her better half, David Hornsby?

Emily and David first came across each other in 2007. It was one of their mutual friend who first introduced them to one another. After their initial date, they decided to go out once again. One thing led to another and Emily fell in love with David.

And a few years later, they got engaged and consequently, exchanged vows sometimes after. Not a whole lot is known about their relationship all because both of them like to keep it down low.

We have often seen a celebrity’s marriage end partly due to external intrusion into their conjugal life. And due to this very reason, Emily remains mum about her matrimonial life.

This is why she is not much active on social media. She has one verified account on Twitter in which she rarely shares any pictures of her husband and kids.

Meanwhile, her spouse David is sporadically active on Instagram. Even so, he also follows the same principle as Emily and shares pictures of his family sometimes.

We wish the blissful couple all the best for their future endeavors!

David Alan Hornsby is a multi-talented personality. He excels in acting, screenwriting, and producing. The 44-year-old Virginia native made his presence known after appearing in the FX comedy series, It’s Always Sunny in Philadelphia. Apart from this, he also starred in Good Girls and Six Feet Under.

Nevertheless, David has lots of behind the scene credits as well. He was the creator and executive producer of How To Be a Gentleman (2011-12) and Unsupervised (2012). Furthermore, he also created the pilot of Mission Control (2014).

Dave is also interested in arts and often draws full-body sketches. He is still learning though. Take a look!

We can say he is indeed a multi-faceted man and Emily is quite lucky to have him as her husband.