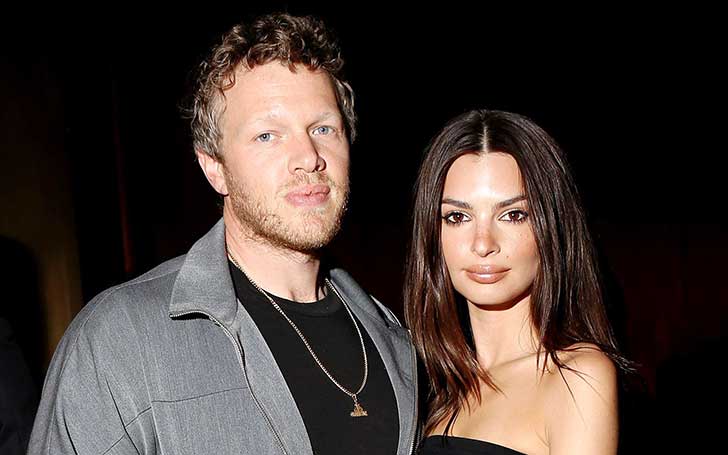 It is hard to believe how quickly the London born model and actress Emily Ratajkowski got married to Sebastian Bear-McClard. Emily is known for her outspoken personality in the media, however, her wedding came as a surprise to the media and her fans in 2018.

So, why did the 29-year-old actress get married unexpectedly? Let’s find it out here.

Emily Ratajkowski & Husband Sebastian married within a Couple of Weeks

Emily Ratajkowski tied the knot with her husband Sebastian in February 2018, shortly after Valentine’s Day. The 29-year-old actress announced her marriage through an Instagram story the same day she exchanged vows with Sebastian at New York’s City Hall. Have a look:

Emily went untraditional with an orange trench, pants, and a black hat on her wedding day. While on the other hand, Sebastian wore a casual, colored suit and a pair of sunglasses.

The couple was first snapped getting cuddly together on Valentine’s Day’s eve. They tied the knot within a couple of weeks. The duo had known each other for two years.

Meanwhile, a close source told Us Weekly, a couple of weeks after their wedding, “They were all in a friend group … He wasn’t a stranger.”

For their honeymoon, the duo jetted off to Amangiri, a remote luxury resort in Canyon point Utah, a couple of weeks after their nuptials.

Did you know: Emily is one of the hottest Instagram Bikini Models

Emily and Sebastian’s Engagement: They Made their Own Engagement Ring

In her appearance on The Late Night Show with Jimmy Fallon in April 2018, Emily gushed about her wedding and engagement. There she said Sebastian proposed to her at Minetta Tavern without a ring so she said “nah” at first. Then, Sebastian took a paperclip and made her a ring and the pair got engaged.

Furthermore, Emrata said she and her fiance went on to make their engagement ring themselves a night before their wedding. She told Fallon they went to Chinatown and bought an ounce of gold. Then Sebastian went to Midtown and found a man who would later help them make the rings.

Emily said she had thought of substituting her engagement ring after their wedding. But, she said she was attached to it and decided to wear it permanently.

Her Relationship Prior to Her Marriage

Before Emily Ratajkowski started dating her husband Sebastian, she was in a long-time relationship with Jeff Magid. Magid is an American music composer and producer. Quick fact, Emily broke up with Magid just three months before her matrimonial.

They were dating in December 2014 first. At the tome, a close source to the couple told US Weekly that they were seeing each other.

They sparked romance rumor yet again in early December after enjoying a cozy time at the Bombay Sapphire Artisan Series Finale party in Miami.

After nearly three years of togetherness, Ratajkowski and Magid broke up in late 2017.

Meanwhile, Emily also went out with businessman Andrew Dryden for around three years before Magid. The pair didn’t talk much about themselves when they were dating which makes their love story a little mysterious.

In February 2014, the rumor regarding their breakup started swirling after Emily attended the Super Bowl parties alone.

Ashley Graham Is Married to Husband Justin Ervin Since 2010: Their Married Life